How does a tiny Georgian theatre survive in a working class town? Esther Harris talks to Richard Stride, owner of the Groundlings Theatre in Old Portsmouth. 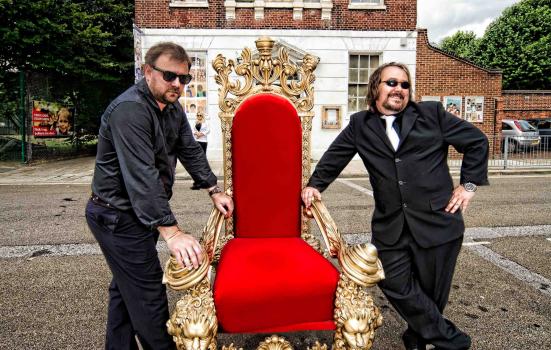 Richard Stride (left) and Theatre Manager Jim, who started out as a volunteer

Portsmouth: The UK’s only island city is famous for being home to Her Majesty’s Navy, and, despite the multi-million pound arrival of the flashy Gunwharf Quays shopping ‘arena’, it still retains the baldy scruffiness of a port in a storm. Pompey locals are a community of grafters for whom nothing comes easy, least of all football results (Portsmouth Football Club is famous for its debts and rows with HMRC), or jobs – thanks to government cuts on shipbuilding. So you would have thought that a rundown Georgian theatre in need of restoration was unlikely to be high on the community's list of priorities. On the contrary, theatre owner Richard Stride has found plenty of Pompey locals willing to cautiously push open the doors of the Groundlings Theatre, a seventeeth-century building, which is off the main drag of the city, nestled among a group of council houses, new Barratt homes and university buildings. “It’s about getting them to take ownership,” Richard explains.

‘The Old Benny’ is an easy place to fall in love with. Richard himself thought he had left Portsmouth for good in the 1990s but fell in love with the building as soon as he set foot in it. The building, built in 1785, has a fascinating history. Henry Ayers, prime minister of Australia went to the school there, Jonas Hanway, inventor of the umbrella was born there, and it is where Elizabeth Dickens went into labour with England’s most famous author.

However, Richard, a former stuntman and actor, bought a burned-out shell of a theatre – thanks to a stray firework – and had a major restoration job on his hands. He decided to appeal to locals to roll their sleeves up. “We desperately needed help,” Richard says. “Volunteers, enthusiasts, helpers, builders − anyone. We appealed: help us and we’ll help you. We got to know everyone who came in to lend a hand, and what their interests were. When the opportunity to return the favours came up, we did. One guy who loved the history of the place has ended up becoming our resident historian and regularly shows visitors around. Another said that he wanted to learn how to light his own show, so when we were up and running we taught him, and he put on his own show about 100 years in the life of a local street. Another volunteer wanted to learn about costume, and has now got a job in London’s West End.”

The ‘you scratch our back, we’ll scratch yours’ approach is pure Pompey, and Richard soon had a community of volunteers who were spreading the word to friends and family. “Word of mouth is vital in Portsmouth. The people can be just a little suspicious of outsiders,” he says. Richard’s down-to-earth style has undoubtedly helped too. He’s not luvvy or intimidating – he’s just a local ‘geezer’ who owns the theatre.

With the theatre fully restored, the team of actors, locals and volunteers run a varied programme of events for young and old, from pantos to comedy, to new plays and Shakespeare. Richard continues: “A couple of times a week we also run events that are free to attend. People around here don’t always have that much spare cash but we don’t want that to put them off visiting us. On Sundays we have live music and storytelling in the café, and people can pop in and listen. They don’t have to spend anything. It’s relaxed, it’s neighbourly – it’s a home from home.”

Richard always wanted to own a different kind of theatre. A somewhat unlikely thespian himself, he is a strapping forty year old from a family of four burly blokes. In keeping with this, the Groundlings is one of only two dinner theatres in the south where the audience sits on round tables to watch a performance and eats together afterwards. “It’s actually the traditional way of attending theatre, and I wanted to get back to that,” Richard continues. “It felt right for our community.” The approach is working and Richard has noticed that the number of local families booking together is rising, and families are befriending the group from the next table and then deciding which Groundlings show they will come and see together next.

“To hear local families recommend a show to each other or plan to meet – it doesn’t really get much better. I know that the community has taken us to its heart. We’re one of them.”

Esher Harris is a freelance writer and PR consultant.
www.groundlings.co.uk