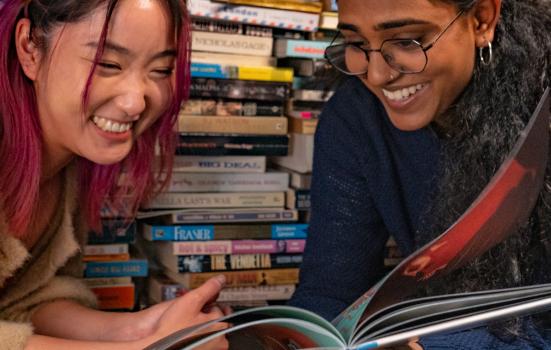 Riko Sekiguchi and Neetu Singh were recruited by Creative Access at NoBrow Press in 2021
Photo:

The social enterprise Creative Access surveyed 1,900 people “working in, or looking to pursue, a career in the creative industries”.

Of these, 77% said financial concerns had stopped them applying for a better creative job.

This rises to 82% for people from socio-economic backgrounds currently under-represented in the sector, with 58% of this group stating they had to turn down a job offer because they couldn’t make it work financially.

Across all respondents, over a third (35%) said they had refused job offers in the sector for financial reasons.

Unaffordable living, commuting and relocation costs were the most common reasons.

Josie Dobrin, CEO of Creative Access, said the results were a “confirmation of what we already knew to be true: financial barriers exclude those from under-represented communities from progressing in the creative industries”.

Across creative sectors, film and music came out worst with 86% of potential candidates stating they didn’t apply for a role due to financial reasons.

Theatre was close behind on 85%, and 81% of people working in the museums and galleries sector reported the same issue. For TV, the rate was 82%.

The barriers for young people starting out in the creative sector are especially severe.

Of those respondents aged 18-25, 76% said they hadn’t applied for new roles because of financial considerations associated with the move.

For applicants who take the plunge and apply for a new creative job, the picture is only slightly better. 69% of 18-25s reported that they had turned down a role they were offered because it wasn’t financially tenable.

The impact is also felt keenly amongst 26-35 year olds: 79% stated that financial pressures stopped them applying for a new role.

Creative workers who identify as having disabilities also reported money issues as as an impediment to career development: 80% did not apply for a role for this reason, while 59% did not take up a job offer.

On the back of the research, Creative Access has launched a new creative bursary scheme in collaboration with the British motor racing team, McLaren Racing.

Dobrin said the bursaries will “fund talent from under-represented communities as they springboard into their creative careers”.