The sector needs to start from scratch and develop a national strategy for screening or audiences will continue to lose out, warns English Touring Opera. 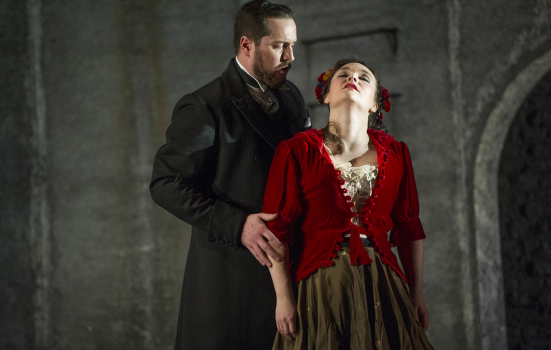 English Touring Opera (ETO) has challenged claims by Arts Council England (ACE) that screenings of live performances attract new audiences, saying current research is “not consistent” and “not done well enough” to be used as proof.

It also warned that the current distribution of screenings is “very unplanned” and harms audiences by creating unnecessary competition between live and streamed work.

The comments come weeks after Chair and Chief Executive of ACE Sir Peter Bazalgette and Darren Henley claimed screenings attract new audiences, and the launch of a new survey to examine the impact of streamed, screened and on-demand broadcasts on live theatre.

ETO’s 2014 research with Guildhall School of Music and Drama found that 81% of cinema opera attenders were over 60, had an age profile “slightly older” than that typically found at live opera, and reported no increased motivation to attend live opera afterwards.

This is supported by ACE’s own research with the BFI, which found there is “no evidence that event cinema is growing new audiences”, and that audiences of event cinema tend to be already engaged in the arts and likely to live in London.

Conclusions in research by Nesta that screenings – predicted by IHS to reach $1bn in revenues worldwide by 2019 – do not ‘cannibalise’ live theatre’s audiences is also disputed, based on ETO’s recent experiences.

Its Artistic Director James Conway told AP: “If there’s a direct clash, we lose audiences. And so do they - because it’s the same audience. Only the audience for film opera is smaller.”

Conway added that ETO would love to help the sector “start from scratch” and initiate a national strategy for screenings of staged productions, a move supported by the RSC, The Globe and Digital Theatre, but opposed by The National Theatre.

ETO’s Press and Marketing Officer Cécile Beauvillard is calling for more independent research on the topic, and stresses that digital distribution is a means and not an end for audience development: “You can’t assume that because we have a digital strategy and videos on Youtube it will translate into a younger audience, or a bigger one. It has to be thought through carefully and that’s something you can’t know unless you do research.”

She added: “When digital broadcasts are well done, we’re all in favour of them – but they have to be evenly distributed across the air.

“It’s a planning thing. We’re offering great live work. They’re offering great cinema work. We just need to have discussion and consultation to make sure venues don’t have ten nights of opera in April and then nothing else for the rest of the year.”