Renewed calls for an end to oil sponsorship

The National Portrait Gallery has previously rejected tobacco money and campaigners are calling on it to be a trailblazer again for the cultural sector by ending its relationship with BP. 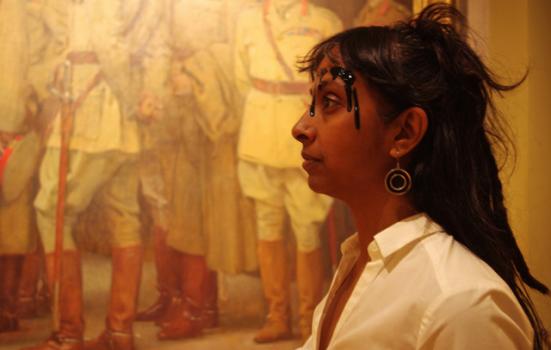 Portraits in Oil: A performance-intervention by Art Not Oil at the National Portrait Gallery
Photo:

Campaigning group Platform has published a review of BP’s relationship with the arts to mark the 25th anniversary of the controversial oil company’s sponsorship of the National Portrait Gallery’s (NPG) prestigious Portrait Award. It aims to build an argument that makes rejecting BP’s funding an act of “irrefutable ethical and common sense”. Citing research published by Climatic Change, it states that BP is the company “third most responsible” for all greenhouse gas emissions since the dawn of the industrial revolution, not to mention decades of “major environmental catastrophes, human rights violations, and backroom deals”. The report asks: “How bad does a company have to be before an arts organisation refuses to be associated with it or take its money?”

‘Picture This – A Portrait of 25 Years of BP sponsorship’ includes an overview of the company’s sponsorship of the arts; an article by Raoul Martinez, an artist who has been shortlisted three times for the award, on the role of art in society; and a year-by-year catalogue of BP incidents and accidents. It makes the case that BP gives little to the arts in return for the endorsement it enjoys: by Platform’s estimation, its sponsorship makes up between 0.3% and 2.9% of the total income of the British Museum, Royal Opera House, Tate and National Portrait Gallery. Pointing to the fact that former BP CEO Lord John Browne is Chair of Tate's Trustees, it questions whether “awkward, diplomatic reasons”, rather than money, are behind the continued relationship.

Drawing attention to the fact that before BP, the Portrait Award was sponsored by tobacco company John Player, and that NPG ended the deal eleven years before a ban of tobacco sponsorship was even proposed, report co-author Jane Trowell said: “the times changed and the National Portrait Gallery rightfully realised that art institutions shouldn’t be giving tobacco companies credibility.” She is calling for NPG to take the lead again: “times are changing again, and we’re aware of the terrible threat of climate change, and the role that oil companies like BP are playing in blocking the response to climate change.” And if they do, Platform will be on hand “to help plan for and support that move”.

Pressure on cultural institutions to consider the ethics of their sponsorship deals is still mounting. The Southbank Centre quietly ended its long-running sponsorship deal with Shell earlier this year, and pressure is growing on Tate over its refusal to reveal details of its deal with BP. Also, a growing number of activist groups are working to end the oil industry’s involvement with the arts. Last month a new group called ‘BP Out Of Opera’ (BOOO) performed a surprise flashmob dance at a Royal Opera House screening in Trafalgar Square, and last weekend Art Not Oil staged a performance-intervention at the National Portrait Gallery.