As library workers in Bromley enter their sixth consecutive month of strike action, their union has taken aim at the company it claims will catalyse the erosion of services across the UK. 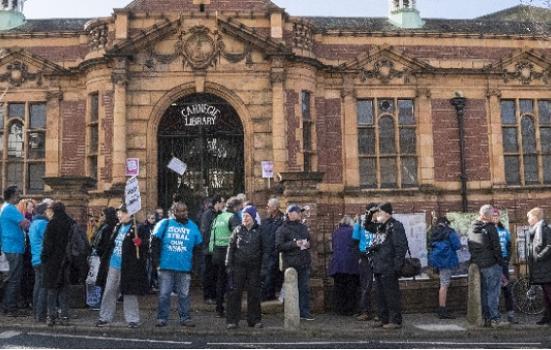 A protest outside Carnegie Library in 2018. The building was later turned into a gym.
Photo:

A company responsible for running more than 100 libraries across the UK has been condemned for allegedly exploiting its staff and closing services against the public’s wishes.

The Unite union says the operating practice of Greenwich Leisure Limited (GLL), which trades as Better gyms and leisure centres, “makes a mockery of the term ‘social enterprise’."

“They act exactly like any private company when it comes to winning contracts and making cuts,” the union says.

GLL runs 113 libraries on behalf of local authorities in in London, Dudley and Lincolnshire, having closed or merged several into its gym business in recent years.

As of Friday, 50 library workers in Bromley have entered their sixth consecutive month of strike action against GLL over its proposal to cut 30 jobs. A crowdfunding campaign for the striking workers says “the stakes are high”.

“If GLL succeed in gutting the libraries here then other companies will follow suit elsewhere in the country, and a once-proud public service will be destroyed for good.”

In a recent newsletter, Unite claims GLL employs two-thirds of its staff on zero-hour contracts, docks workers’ pay when they take sick leave, uses unpaid volunteers to do the work of paid staff, and has “ignored the community, service users and staff” in the London boroughs of Bromley and Greenwich.

“They cut costs, cut staffing and allowed a situation to grow whereby due to these cuts, there were not enough staff hours to keep the libraries open – the service was only maintained by staff working extra hours beyond their contracts.”

When ArtsProfessional asked GLL for its response to the claims, a spokesperson provided a statement saying: "GLL deeply regrets the Unite union's strike action in Bromley, which is only to the detriment of the local community.  Talks are ongoing with the union and we hope for a resolution in the near future."

Unite’s regional officer for Bromley, Onay Kasab, said GLL’s practices present a risk to library provision if the local authorities that contract the company do not act now: “where GLL lead, others will follow.”

He claimed GLL has temporarily replaced the striking staff with leisure workers to poor effect, saying “library users have been complaining that the cover staff do not know anything”. He added that it may use the strike as an opportunity to bring in cross-discipline staff, rather than library specialists, on a permanent basis.

GLL has previously encountered controversy over library services other locations. In 2018 it turned the basement of Lambeth’s Carnegie Library into a gym, despite vocal public opposition. Unite also claims GLL failed to fulfil its promise to provide an alternative service to the library on Greenwich’s Ferrier Estate, which was demolished in 2012.

Bromley Council is currently consulting on the relocation of Beckenham Library – another GLL facility – so its site can be used for housing. The proposal has met stiff opposition from locals.

And almost 1300 British libraries closed completely last year, leaving fewer public spaces for delivering community and council services – including the arts. This week, the former General Manager of East Riding arts centre Bridlington Spa claimed he was fired for refusing to accept a £4000 pay cut when his job was reclassified as being on par with a leisure-related role.

Nick Poole, Chief Executive Officer of librarians’ association CILIP, said public library provision is a statutory duty for local councils and central government, and that any changes to services should first be subject to an impact assessment.

“Our view is that it is perfectly reasonable for a library to provide additional services but only where these build on a strong core library offer. Our concern is that councils are treating combined services as a cost-cutting measure to the detriment of service users.”

Poole raised proposals to cut libraries services in Essex as an example of poor planning for the population increase the fast-developing area will have in 10 to 20 years’ time.

“Where councils have fallen foul of the planning process, it is often because the proposed changes are driven by the need to make cost-savings and aren’t really justified by what the data is telling them about user need.”