Freeze or cut pay to get funding, sector told

Funding bodies will enforce "pay restraint" at the organisations getting recovery money - but won't be exercising the same restraint themselves. 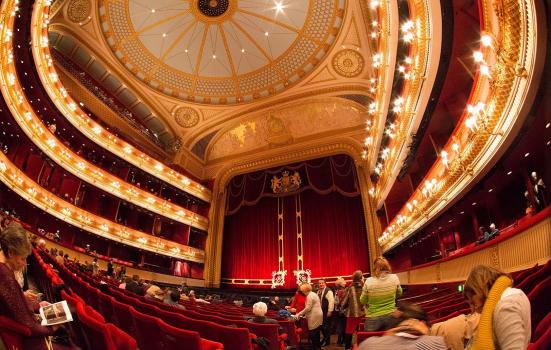 Top staff at the Royal Opera House, pictured, will have to agree to take pay cuts to access emergency funding
Photo:

Arts organisations must freeze or cut the pay of their senior staff to receive emergency funding.

Guidance released by Arts Council England (ACE) says that successful applications for a share of the £500m Culture Recovery Fund will have to agree to "exercise pay restraint for at least 18 months" where it is legally possible, including a pay freeze for all "senior staff" and 10% pay cuts for anyone on more than £150,000 per year.

But ACE and DCMS, which set these conditions, will not be exercising the same restraint themselves: "This is only applicable to organisations facing financial difficulty that need to apply to this particular Government programme," an ACE spokesperson said.

At this stage, the funders have given no indication as to who they consider "senior staff" or what other measures might fall under the definition of "pay restraint".

National Portfolio Organisations (NPOs) and other applicants that receive funding will have prove they made the cuts and freezes required in a post-programme evaluation.

Pay cuts for some of the cultural sector's highest earners could run into the hundreds of thousands of pounds.

Analysis of annual reports and accounts reveals where the impact of these funding conditions will be most keenly felt. If the top 10 highest-funded NPOs accepted the bailout conditions - which they aren't contractually obliged to do - many top executives would take a 10% pay cut. Together, the savings would amount to around £220,000. 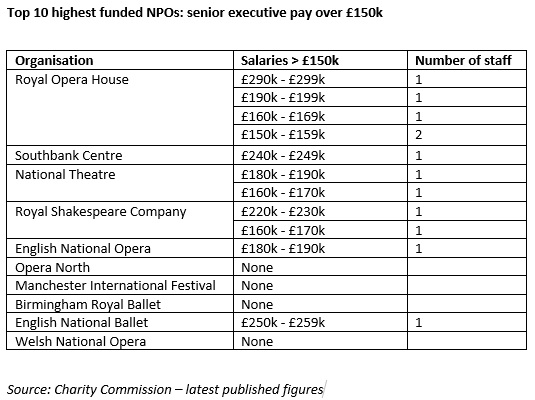 No cuts for ACE

Asked whether any of its staff would take pay cuts, ACE said none of its employees earn more than £150,000.

But when pensions and bonuses are taken into account, its senior staff's earnings rise significantly. 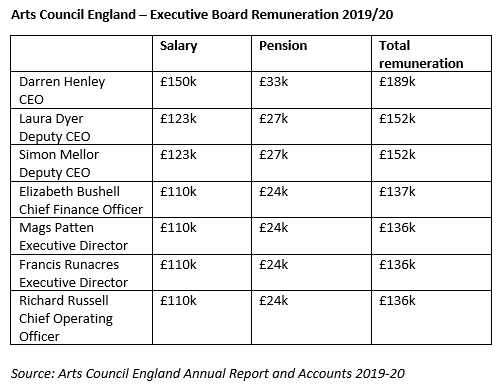 An ACE spokesperson said CEO Darren Henley has decided not to take a pay rise this financial year. He will continue to donate his roughly £17,500 bonus, as he has done in recent years.

Culture Secretary Oliver Dowden earns £149,437 per year from his salaries as an MP and a Secretary of State.

Organisations will be asked to provide "best value for money plans" as the UK charts a slow return to normality.

ACE acknowledges in its guidance that the lack of international tourism and social distancing requirements mean organisations won't be working as usual: "We expect this will continue to constrain demand for many organisations, both in terms of venue capacity but also consumer demand".

"Organisations will want to consider how their typical customer base is likely to respond to continued social distancing measures."

Although indoor performances have been given the green light, "the path of the virus is uncertain and it is therefore impossible to predict between now and March" how circumstances might change.

"Any further steps to continue to open up the economy will be dependent on the state of the epidemic at the time and the trajectory of cases being stable or remaining in decline. Similarly it will be necessary that local outbreaks are identified quickly and quashed and a resurgence in the virus may require tighter restrictions," the guidance says.

"It is in that context that we ask organisations to set out best value for money plans within current guidelines, whilst accepting that the exact path may vary."

It is such a shame ACE seems to be saying 'Do as I say, not as I do'. Yes most senior staff are paid under the level of payment for reductions but I for one have a really bad taste in my mouth that the Exec team aren't all volunteering to take at least a 5% pay cut on their salaries. This is like the male BBC staff saying 'not my problem' when the huge gender pay gaps were revealed - and we all know how they lost and continue to loose respect because of that. How can ACE execs expect others to feel financial pain when they won't. No doubt no one else will add anything to this discussion as everyone is too afraid to criticise the hand that feeds them. How will ACE change unless its clients demand it should. ACE leaders need to actually lead - and that means by example - even if that means it hits their pockets.

Friday, 25 September 2020
£7.4m of Historic England's £92m Heritage Action Zones scheme has been allocated to projects in towns across England. The programme asks for cultural consortia to lead on creative projects to... read more

Friday, 25 September 2020
Dignity issues around hair and makeup, racist language in the casting processes and casual racism in dressing rooms have been among the growing number of complaints raised by Equity members in the... read more
(The Guardian)