The energy, invention and will to survive shown by young companies will replenish and rekindle our industry says James Phillips, but unless the industry finds a way of nurturing them, a career in theatre will only be available to the children of the wealthy. 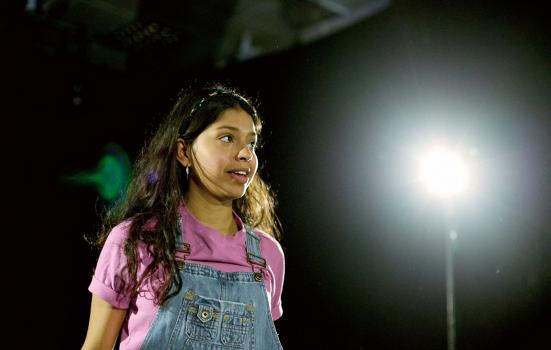 There’s really no such thing as student theatre. What you witness if you come to a festival like the National Student Drama Festival (NSDF) is the real-time rebirth of the UK theatre industry.

Theatre companies that began as student collectives have a disproportionate effect on the most innovative aspects of our industry. Just take the example of companies that have come through NSDF itself in recent years: Slung Low, Rash Dash, Barrel Organ, Breach, Holy What, Ugly Bucket, Poltergeist. All different, all uniquely themselves, all making a difference by making things.

These young companies renew the industry and lead the way forward for the rest of us.

There are serious challenges though. Here are a few of the most difficult ones, and the ways NSDF seeks to overcome them.

NSDF is committed to diversity and to honouring the word ‘national’ in our title. That means we need to create and hold space where people from across the country, from across social, economic and ethnic divides, can come together and meet and create. This is the purpose of a Festival such as ours. It’s also vital to putting back together a fractured country.

In the last twelve months we have created a regional ambassador programme to spread the word of both the arts and of NSDF. We have created an NSDF Company, where we find young people of great ability and then place them with others from across the country for bespoke mentoring and training. We’ve just launched our first NSDF Lab where, with a small group of young people drawn from across the country, we will start to make new work in preparation for next year’s Festival.

We’ve adopted unorthodox routes to reach people. Gary Lineker, England legend and big theatre fan, agreed to be our Patron this year. He recorded a special interview with Simon Stephens about theatre and sport, which allowed us to reach out to people who might not necessarily think the arts is for them. Five thousand people watched that video in the first few days.

We’ve learnt that an Online Room can be a bigger room. Because of Corona I cancelled NSDF two weeks before the Festival was slated to open. The next day we decided we would put the entire Festival online, and that we would make it free to all and available to everyone. In just two weeks we learnt the skills necessary to do just that.

NSDF20 became one of the most successful, innovative and vital festivals in the 64-year history of the organisation. 7,800 people were part of the Festival during the week it was live, and with more viewers watching our recorded content, that number has already risen to over 10,000.

We need to find new ways to connect people from different backgrounds, to widen the great conversation, so we’re about to announce the NSDF Bigger Room Project, to take advantage of lessons learnt through the success of our online festival. We’ll be programming events on a monthly basis across the whole year, giving young people access to industry-leading talents for free and via our Zoom and Facebook pages.

Everything in our industry comes down to money. Money to get stuff made of course, but also the money that allows young people to come to places such as NSDF where we can put them with the people who can change their lives.

Last year we ran the biggest bursary campaign in the history of the Festival, giving away over fifteen thousand pounds worth of tickets. This year we were committed to over twenty thousand pounds worth. But it’s not easy. A group from a community at economic disadvantage will still struggle with the cost of transport, food and accommodation, as well as the logistics of bringing teachers, if it is an under-resourced school or college. That’s not to say there’s no hope. The amounts of money necessary to make vast and lasting change are miniature in comparison to the amounts spent across the industry. We can do this. And we will.

The arts in this country need renewal, now more than ever. When the asteroid hits, it’s little creatures who survive and flourish and show how to continue. There’s an evolutionary logic to this: if you’re small then you’re nimble and you survive and grow. The theatre made by young companies in the years after the corona catastrophe ends will, I’m certain, bear this out. The energy, invention and will to survive and to create will replenish and rekindle our industry.

I hope very much NSDF can be useful in this. It is a unique and precious charity that has helped generations of talented young people of all backgrounds find their home within the arts. Talent is spotted and coached and lives get changed. And you get to be part of something. That’s what a piece of art is – an invitation that says ‘you too have something to contribute’. Student theatre is a contribution to our great conversation, one as valid as anything you’ll find in a huge building. Come and join us next year, when the world opens up again, and we’ll show you.

James Phillips is Director of NSDF. His new film, The Good Book, has just been released and is free to view.