The pandemic has proved the power of the arts in addressing isolation. Eleanor Sutton shares how a volunteering programme is benefitting artists and the elderly alike. 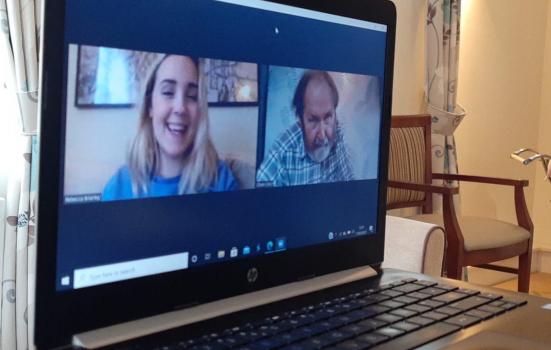 When I and two colleagues found ourselves with a lot of time on our hands early last year (no points for guessing why), we decided to put our extra energy to good use. After much conversation about how to help the people who needed it most, Connectforce Community – a social enterprise to tackle loneliness and isolation among the UK’s older population – was born.

Connectforce began as a Covid-19 emergency response. Initially it focused on donating electronic devices to care homes in need so residents could speak to their loved ones despite visiting restrictions. During this time, the team also called hundreds of care homes. It became increasingly clear from care home workers’ stories that technology alone was not enough to help the elderly feel less lonely. Sadly, a huge number of the residents they spoke to simply didn’t have any loved ones to call.

According to Age UK, there are 1.4 million chronically lonely older people in England and many more across the rest of the UK. When the pandemic forced the arts world to close, a hugely talented industry was left out of work and with little financial or emotional support. Connectforce recognised the impact on the mental health and wellbeing of both these groups and saw a natural fit between artists and older people. We launched Connectforce Companions, a virtual befriending scheme, to create meaningful social connections.

The system brings together older people and volunteer arts industry ‘befrienders’ via weekly video calls. Current volunteers include famous faces from TV, top-class theatre performers, established writers and directors – even a professional jester. Connectforce has seen first-hand how confidently individuals from this sector communicate. Artists are brimming with energy, positivity, and empathy; that’s why they make such brilliant companions to their older counterparts.

Connectforce has heard countless heartwarming stories arising from conversations between a previous generation of autobiographers, showgirls and actors and their successors. Some pairs have shared writing tips or sung together – one pair has even pencilled in a theatre trip as soon as they are able. The companions love sharing stories and it’s a pleasure to hear snippets of the vast knowledge and experience being shared between them week after week.

The benefits for participants on both sides are clear. One care worker described how the programme has given a resident “the opportunity to be herself again”, whilst a volunteer said their companion was “someone who I would never have otherwise spoken to; we come from completely different worlds”. The uplift in people’s moods and their deepening connections are testament to the power of intergenerational conversations and the impact that the arts can have on our mental health and wellbeing.

Connectforce currently has about 50 pairs involved in the scheme and that number is growing day by day. It has received support from Mountview Academy of Theatre Arts, which has generously spread the word and encouraged staff and students to volunteer for the scheme. Earlier this year Connectforce received a National Lottery grant that will help it to further establish itself as a channel between care providers and the arts.

To bolster their Companions programme, Connectforce is developing a scheme to provide live-streamed performances to older people, as well as an intergenerational project to connect care homes to local primary schools. It has an upcoming partnership with Notting Hill Genesis, which will generate another 40 connections between artists and the elderly. Connectforce is also trialling a music-focused branch of the befriending scheme.

It’s no secret this is a tough time for the creative sector. The Connectforce Companions scheme is a way for creatives to harness their unparalleled communication skills and improve the life of someone who needs support. In just 30 minutes a week the artists gain positivity and purpose for themselves. Above all, it’s a chance to make a real difference in our spare time and learn valuable life lessons.

Eleanor Sutton is Co-Founder and Co-Director at Connectforce Community.