A live cultural event is about much more than just the performance, so when Covid-19 closed venues, innovators in the club scene set out to recreate the whole experience. Jack McNeill explains how. 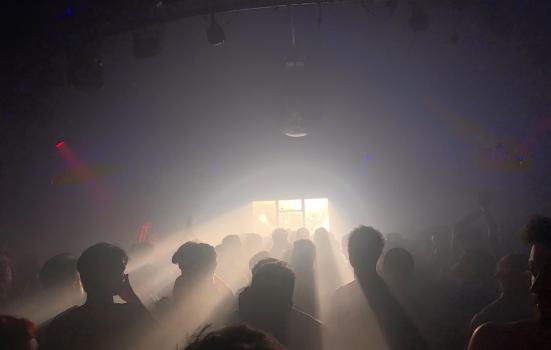 When Arts Council England (ACE) announced the successful recipients of the government’s £1.57 billion Culture Recovery Fund (CRF), included on the list were organisations across the arts that you might expect to see and that are deservedly recognised as important to the UK’s cultural landscape. But hidden among these are a number of more controversial organisations that have historically been considered subcultural and the underbelly of UK’s cultural landscape. These organisations exist under the umbrella term of underground club culture.

In reality, ‘underground’ club culture isn’t all that underground anymore. Clubgoers no longer have to trapse to farms in the middle of nowhere or to dingy, abandoned warehouses on the outskirts of cities to attend covert illegal raves. Each weekend (pre-Covid … supposedly) nightclubs open nationwide as legitimate performance spaces for DJs and live artists, each with different styles, atmosphere, and music policies. Club culture has even penetrated the concert hall, with one of techno’s founding fathers Jeff Mills being programmed by the Barbican Centre on a number of occasions, and Pete Tong touring his Ibiza Classics performance with The Heritage Orchestra. Club culture has positioned itself within the more mainstream cultural economy. Despite all of this, the CRF grant announcement has triggered some debate.

Lesson to be learned

Successful funding applications by organisations like Fabric, Village Underground, Resident Advisor, the CLF Art Café, and many more have led to the question of how deserving nightclubs and nightlife organisations are of governmental financial support. There are arguments that such organisations are already commercially lucrative (despite their constant threat of closure), and that their cultural contribution is less than that of other organisations, perhaps a hangover from the anti-Acid House campaigns of the late 80s and early 90s.

The reality is that organisations across the cultural sector are all in crisis and infighting is unproductive. Moreover, in light of the pandemic, there is a case to be made for the innovation underground club culture has demonstrated, and how organisations, professionals and practitioners might look to them for inspiration for their future development.

What makes an event? Is it solely the performance itself? Perhaps there is enjoyment in rituals of getting ready, going for a meal or drink before or after, chance meetings with friends, or minute details, such as the smell of a favourite venue or even the irritating rustling of another performance goer’s snacks on the next row. Experience of performances involves all of these things and more; a ‘total’ experience (Gesamtkunstwerk) with forms of artistic performance as a focus point. The experience of nightclubs is no different. Participants will dress a certain way, meet friends before or in the toilets, shout over each other, dance, and more. Within the four walls of the venue, the site is produced through these experiences. As with the performance venue, a DJ or live act’s performance is critical, but is by no means the only part of that experience.

In the wake of the March 2020 Covid-19 closures, performances were stripped of their sites and new ways of experiencing live performance became necessary. These came predominantly in the form of live streams. Lockdown ensembles and choirs began to flood our social media feeds. But the immediacy of live performance was missing. Some innovators in the underground club scene began to take a different approach, constructing a reflection of the real site in the absence of physical space.

This exploration began in early March, with the conception of United We Stream. The organisation first started live-streaming on-location from clubs in Berlin. The majority of DJs were those clubs’ residents, and each club’s visual identity portrayed on the stream. Viewers were given the option to donate what they might spend on a typical night out to the organisation, with funds split across participating venues, emphasising the collaborative nature of club culture.

However, this literal representation of site demanded more. On 27-29 March 2020, Sam Aldridge, Selam X, Marco Land and artists 200kg, alongside a handful of DJs, hosted the first iteration of Club Quarantäne – an online club that broadcast for 48 hours non-stop, inviting the hedonistic, continuous participation that has come to be expected from nightclubs. The site included a virtual queue, where participants would wait to be let in; a ‘bar’ where, for the price of a drink, participants could donate to their choice from a selection of club-related charities; toilets, which were represented as a number of chatrooms hidden behind cubicle doors; and, of course, a 3D interactive dancefloor. Other events followed, and the development of socially led sites such as Syncers Worldwide and ‘zoom raves’ such as those organised by Dalston Superstore began to build momentum.

As a community, this was what clubbers were missing; casual interaction and the experience of the club that exists on the peripheries of the dancefloor. And this may be what other online performances have been missing. There is little difference in terms of sociability between an underground club event and, say, a classical concert. These are social occasions that celebrate the immediate presence of an audience, both in the concert hall and the foyers or bars that flank them.

The current and harsh reality is that Covid-19 will be with us for the foreseeable future. The CRF grants will sustain recipient organisations for some time as the arts industry is put on pause, but there is no end date on the current situation. Rather than waiting until things return to some form of normality, perhaps we should be looking at new ways of giving audiences an immanent experience; new ways that more effectively echo the social spaces that surround live performance.

Spaces like Club Quarantäne may not be perfect replacements for social, physical performance spaces, but they are innovative in their solution to the absence of physical space and the sociability that it encourages. They offer a useful example and propose a creative response to these absences that could perhaps be adopted more widely across the cultural sector.

Jack McNeill is an early career researcher at the University of York and co-founder of London-based creative studio and events producer, Artificial Hells Studio.