The creative activity that thrives in everyday society is often the most overlooked and unsupported, writes Robin Simpson. Here’s how you can help. 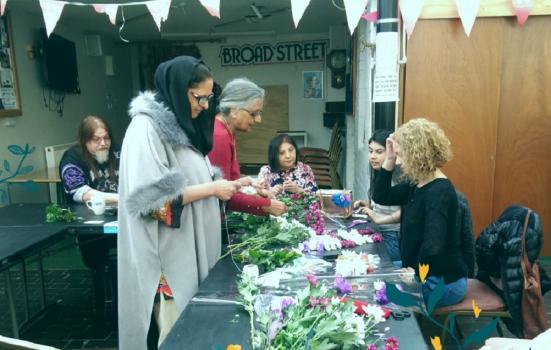 Foleshill Creates – a group based in a part of Coventry, England, with challenges including food poverty.

Studies about the arts always seem to tell us that there's little creativity happening in the poorest parts of the country. The Warwick Commission’s 2015 report on the future of cultural value suggested the wealthiest, best educated, least ethnically diverse 8% of the population forms its most culturally active segment. But our experience is that there is creative activity going on everywhere – it’s just not always the sort that gets counted in national surveys.

This year Voluntary Arts celebrates 30 years as the voice of the amateur arts sector, speaking on behalf of tens of thousands of local groups across the UK and Ireland. Over the past decade, we have become increasingly interested in how we reach people who don't take part in creative cultural activity – those who think art is ‘not for us’. In 2015, Voluntary Arts undertook a major exploration of creative cultural activity in Black, Asian and minority ethnic communities. We have now used the model we developed for that piece of work to look at issues around socio-economic diversity and class.

The playwright Lee Hall, writer of ‘Billy Elliott’ and ‘The Pitmen Painters’, told Voluntary Arts about his own experience of growing up in Walkerville, Newcastle in the 1970s and 1980s. He said: “A lot of people would, I think, from the outside have mistaken it for being a place where culture really didn't exist. But I found it an incredibly rich place to grow up at that time". Lee spoke about how ordinary working-class culture is participatory culture, saying that "anybody and everybody can be creative, and we are all equally creative, in a fundamental sense”. Being creative is as much about sharing with other people as pursuing your own gift. “The bigger gift,” Lee said, “is that you’re sharing it with others”.

It has been fascinating to see how lockdown prompted a huge increase in people undertaking everyday creative activity at home and a growing interest in how creativity supports mental wellbeing. Better appreciating the role that grassroots creativity plays in our culture and society can provide a real opportunity to address the growing crisis of loneliness and isolation which the pandemic has exacerbated.

People always find a way to express themselves creatively, but we wanted to examine the challenges they face, especially in areas of low investment. If we can identify the necessary components to make creative activity happen, we can help to support it.

Between 2017 and 2019, Voluntary Arts conducted 88 conversations with people involved in local creative cultural activity in communities, with a particular focus on areas defined by government indices as socio-economically deprived. These were long-form exploratory conversations, a mixture of deliberately unstructured one-to-one and group discussions, that took place wherever creative activity was in that community. In total we spoke to 368 people. They told us how voluntary arts activity is flourishing, but also about the challenges it faces.

The resulting report, ‘Common Ground – Rewilding the Garden’, celebrates the wealth of creative cultural activity happening in every community across the country. Amateur arts activity doesn't always need public funding, but the fact that it often doesn’t receive any means this vast sector can be too easily overlooked in discussions about arts policy and investment.

The report identifies three basic ingredients for making creative activity happen: the people who organise activity in their communities; an appropriate and affordable space to do your activity; and recognition for the activity’s value.

People who sing in choirs or dance or draw are often so passionate about what they do that they will always find a way to do it. But this passion can disguise the real challenges for voluntary arts activity amid public funding cuts over the last 10 years. Because amateur arts groups don't usually receive direct funding from local councils or Arts Councils, they are hidden casualties of austerity.

Many groups used publicly funded buildings or facilities that are no longer available or affordable. The report also looks at the pressures on those individuals – often volunteers – who organise voluntary arts activity. They face increasing burdens around regulation and compliance. These exist for good reasons such as child protection and health and safety, but the effect on individuals who manage them in addition to their day jobs is profound. There is a real need for more support and training for these creative citizens.

If your organisation has space that you could make available to a small community group for free or cheap, please do. It would make a massive difference. If you can showcase amateur arts activity by giving it a platform or sharing stories about the amazing things happening in your community, that would be incredibly appreciated. And if your organisation is coping with regulatory demands itself and could provide help, training or advice on these matters to amateur groups, that would be really, practically useful. We need to reconnect the disparate parts of our cultural ecosystem – rewilding the garden.

Robin Simpson is the Chief Executive of Voluntary Arts