A commitment to empowering young people has led Battersea Arts Centre and Manchester’s Contact theatre to get involved in board game design, bicycle maintenance and community fishing. Liz Moreton and Suzie Henderson tell the story. 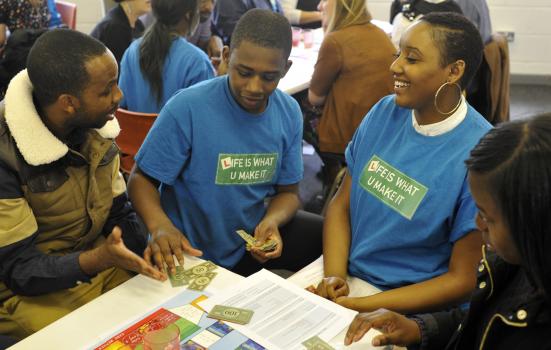 We have both spent the last 15 years developing programmes that use art and culture to empower marginalised young people to transform their lives. Six years ago we travelled to Brazil with People’s Palace Projects and were introduced to a programme that puts power in the hands of young people to take on issues that matter to them. And for the last five years we’ve been translating, adapting and running a similar programme with young people in London and Manchester.

The programme Agência de Redes Para a Juventude was originally developed in Rio de Janeiro as a response to an urgent need for a new generation of young leaders to rise up. The pacification process in the favelas had created a power vacuum and social structures in many communities had broken down. Over the past six years, the programme has worked with more than 4,000 young people in 30 favelas.

These young people have set up social impact projects based on lived experience, and because of this best tackle the issues their communities face

The Agency, as we’ve called it here, starts by asking young people what their ideas are. It recognises that they have a great and often untapped capacity for innovation and experimentation. And that for a neighbourhood or a city to transform itself, it has to give space to young people, irrespective of their background, to be creative, try out their ideas and participate in the task of tackling real-world issues.

The Agency encourages young people to think like artists – to stay curious and identify the opportunities. The programme emphasises how tapping into networks of expertise and opportunity that exist within the neighbourhoods and cities they live in – but which they are often cut off from – is of vital importance if they are to turn their ideas into a reality.

The process encourages the young people to build their ideas through an iterative process, putting them into practice and testing them out at every stage of development, to ensure they have real impact.

Since we started running The Agency, the young people we have worked with include care-leavers, refugees, young mothers, excluded pupils and ex-offenders. They have set up social impact projects based on lived experience and, because of this, they tackle the issues their communities face with innovative and effective means.

Osmond is from the Winstanley Estate in Clapham Junction, London. Aged 19, he has been running his own community project for the last four years and is the creator of a board game called ‘Life’s What You Make It’, based on his own experiences. It allows participants to play out decisions young people in his area face while growing up, including pressure from gangs, drugs, peer pressure, poverty and relationships.

Osmond developed the game through play-test events in local secondary schools and youth clubs. He’s interviewed and employed designers, workshop leaders and curriculum advisors. His idea has taken him to Manchester, Brazil, the Houses of Parliament and into meetings with business leaders. To date, he has raised over £12,000 for the project.

Osmond’s idea is one of more than 30 projects young people from the Winstanley Estate and the Moston and Harpurhey area of north Manchester have set up. They have raised more than £71,000 for their projects beyond the initial seed funding the programme offers. And this isn’t a short-termist programme that raises aspirations and then hits a glass ceiling. 24 out of 30 of the funded projects are still running today.

These projects have engaged over 6,500 community participants and reached over 12,000 audience members. The impact is significant and demonstrates deep engagement with communities that cultural organisations and other agencies often find hard to engage. We have encouraged our own organisations (Battersea Arts Centre and Contact) to work in partnership with young people, and this has subsequently shifted our position from that of delivery provider to facilitator and developer.

By shifting our resources and expertise to enable this, the neighbourhoods in which we work have witnessed the emergence of a new type of community leader and a proliferation of politically, socially and economically engaged young residents.

The Agency has also led to significant changes at our organisations, transforming how we relate to the communities we serve. We are both now actively involved in food poverty, ethical fashion, coding, bike maintenance training for ex-offenders, and even community fishing.

We are now applying our creative processes not just to create theatre or other artistic projects led by our organisations but to co-create with our local community on issues they are passionate about. These activities are not just side-lined as engagement or outreach work but are a central part of what we do.

From September, a National Lottery grant will support The Agency to work with young people from across Cardiff and Belfast in partnership with National Theatre Wales and FabLab Belfast.

FabLab, based at the Ashton Community Trust in north Belfast, is a digital fabrication laboratory. It will offer local young people its creative expertise with digital maker technologies to support the development of their ideas. Specific challenges include divisions over cultural identity, involvement in and the influence of local paramilitary gangs on both sides of the community.

National Theatre Wales (NTW) has established a firm reputation as a radical and pioneering theatre company developing a strong relationship with communities across Wales and the world. At the heart of NTW is TEAM, community leaders who organise, mobilise and make decisions for the organisation. NTW has identified The Agency as a way to develop diverse young leaders and robust ideas, to which TEAM can offer further support and development beyond the initial funding and support the programme offers.

From 2020 we aim to roll out The Agency even further to offer cultural, community and grassroots organisations the tools and methods they need to support a movement of young leaders seeking to make lasting change for the benefit of everyone.