Safeguarding the arts in times of economic uncertainty

Creative Scotland may have been short-sighted to cut funding to Scottish Youth Theatre, but something needs to be done about oversubscription to our arts funding streams. Graham Main suggests some radical solutions. 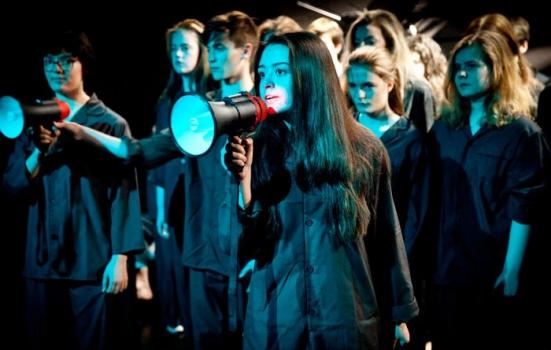 Scottish Youth Theatre: Its legacy can be seen in virtually every production in Scotland
Photo:

Scottish Youth Theatre (SYT) recently announced that it would be forced to cease operating as it had not been successful in its application for regular funding from Creative Scotland for the 2018–21 funding period. Thankfully the Scottish Government stepped in to keep its doors open, but the whole episode fuels the ongoing debate on the purpose of our arts councils when they stop funding the work we have grown to love. A lot of these concerns will resonate with arts managers in the rest of the UK. Instability across the sector causes uncertainty.

Creative Scotland has been left in a bit of a tailspin in the aftermath of a string of management failures which led to decisions about funding being overturned. It has resulted in the sector beginning to lose confidence in the organisation’s ability to perform its basic functions. To the outside world, cutting companies like Edinburgh Festival Fringe and Scottish Youth Theatre must seem barmy. Why would you stop funding high-profile projects that appear to be successful?

Commentators have criticised the handling of the most recent problem, suggesting that the managerial tone used by Creative Scotland is ‘uncompassionate’ and at worst ‘unapologetic’. However, Chief Executive, Janet Archer, did make an apology when the organisation was brought to account by a parliamentary committee about its failings.

The problem with success

We must now look beyond the funding decisions and examine the real problem. It can be simplified as success and demand. The continued oversubscription to arts funding is making the business of resource allocation extremely difficult.

According to Janet Archer, arts funding programmes are oversubscribed by three to one, which suggests that the marketplace has become saturated with new projects. It is quite clear to me that Creative Scotland was attempting to shuffle SYT out of the marketplace to make way for new ideas. And I do understand that markets need renewing and refreshing if they are to continue to grow.

According to the Creative Industries Federation, nearly 10% of the UK workforce is employed in the creative industries. SYT is one of the oldest companies that built the foundations of the now thriving creative industries. It could be argued that the continued pressure on arts funding is because SYT (and others like it) have unlocked our creative potential.

Each year SYT continues the search for the nation’s brightest stars by auditioning in every corner of Scotland for its next summer festival. Former participants have been resounding in their belief that SYT changed their lives and its legacy can be seen in virtually every theatre production in Scotland. SYT believes passionately that arts and culture can transform young minds and its commitment to that vision is respected in the arts community across the UK.

We need to take a more realistic view about the future of the arts and how we can continue to safeguard the legacies from the past. The current conversation seems to be solely around justifying an individual organisation’s entitlement to the shrinking pot of funding. It is going to take significantly more courage and honesty to make sure that creativity is resilient to the current fluctuations in the economic viability of culture.

The increase in the number of network bodies in the Creative Scotland portfolio signals an acceptance of a model of competitiveness inherited from the Thatcherite government. We quite liked pretending to be business people, but we didn’t anticipate that we would need to accept responsibility for the future of cultural delivery.

It’s hard work running a successful non-profit organisation and it takes skill to get it right all the time. The priority of artistic quality can easily become lost in project managerialism.

The birth of the National Theatre of Scotland (NTS) may not have helped SYT as some of its work with young people now mirrors SYT’s earlier interventions. But rather than winding companies down, we should consider laying the foundations for co-operations of interest – alliances of purpose.

So, for example, SYT could become a project of NTS while still retaining its independence in programme management. Surely there is sufficient commonality in the strategic purpose of both? Why are we creating more and more organisational layers when what we really need to do is free up companies like SYT to deliver important work with young people?

Dundee Rep and Scottish Dance Theatre have already remodelled this idea through their recent combined working. Catherine Wheels and Visible Fictions, which Creative Scotland initially cut but then renewed funding for, could unite with Fire Exit, which has been cut from the portfolio, to create a new theatre company with a shared governance. That would reduce running costs, increase production value and create a better return on investment for the public. We need to find a different perspective and innovate our funding system from the ground up – not the other way around.

The current model has created too many micro-companies, each with layers of administration that go beyond producing cultural content and resemble something much more like public management.

These might seem like left-of-centre ideas, but at least they confront the horror that is the shrinking public purse and the increasing number of organisations competing for the same money.

I do feel this situation is partly the result of arts organisations feeling they need to be all things to all people in order to get funding. Almost every theatre so I know runs programmes for young people and is finding ways to encourage older people to participate in different ways (see the recent explosion of schemes for people with dementia). This overlap means they are competing with rather than complementing each other. Large funders see this and have a responsibility therefore to encourage complimentarity and to work with orgs strategically so we don’t end up in this situation.
Can I request a little bit of research & accuracy prior to publication. Rather than being ‘recent combined working’, SCottish Dance Theatre has operated within the same governance structure as Dundee Rep since it’s inception in 1986 as Dundee Rep Community Dance Co.
Hi Anita. You are quite right, although I was using this as an example of joint purpose and combined working and focusing on the recent remodelling is demonstrated through the change in resolution to their articles of association, and change of name to Dundee Rep & Scottish Dance Theatre Ltd which took place on the 1st August 2016. There can be a tendency to over-simplify in presenting arguments which I apologise for. Thanks for pointing that out Graham
Seven or eight years ago, I took a group of BA Hons Creative Events Management students on a trip to Salisbury and we heard a presentation from Salisbury Festival and visited Salisbiury Playhouse and Salisbury Arts Centre, all of them separately funded by Arts Council England with their own administrations. Discussing this with fellow teaching staff, I wondered how this could be justified and sustained in a town of just 40,000 people. It couldn't be. They merged.

Scottish Government steps in to save Scottish Youth Theatre
Creative Scotland: ‘Our reputation has been severely damaged’