Creative Scotland: ‘Our reputation has been severely damaged’

The national funder has announced a root and branch review of its funding processes following public outcry that led to it reversing cuts to five arts organisations. 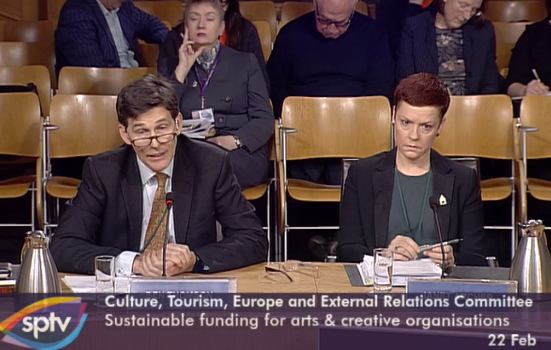 Creative Scotland chiefs were hauled before a Scottish parliamentary committee this week to answer questions about a funding crisis that culminated in a humiliating climbdown on planned cuts for five organisations.

Chief Executive of the national arts funder Janet Archer said she was “profoundly sorry” for any negative experiences felt by arts organisations, and agreed the debacle had “severely damaged” the funder’s reputation.

“I’ll make sure we learn from this process and resolve all the outstanding issues fairly and openly,” Archer added, committing to a review of Creative Scotland’s funding processes.

Members of Scottish Parliament (MSPs) on the Culture Committee probed Archer and former Interim Chair Ben Thomson on factual inaccuracies within bid assessments, the rationale behind the reversal of its funding decisions, geographical diversity, and the details of its newly announced touring fund.

Two weeks ago, Creative Scotland reversed its decision to cut five arts organisations from its Regular Funding network, following public outcry which focused on the fact some of the organisations work with children and disabled people.

Committee convenor Joan McAlpine asked whether it was true that funding decisions had been made through a clear and careful process, and disputed Creative Scotland’s claim that the board’s funding decisions were “unanimous”. She noted board members had flagged up issues and two had subsequently resigned.

In response, Thomson said everyone had reservations about some part of the process, but agreed on the initial list of 116 organisations, and stressed the process from the board perspective was rigorous.

Archer added the board minutes had been subsequently amended to reflect the fact that there was “majority” support for the decisions, rather than “unanimous”.

The MSPs warned that the lesson arts organisations would take from Creative Scotland’s actions is that vocal opponents to cuts have their funding re-instated. Archer insisted this wasn’t the case, and said the board reassessed all 42 organisations that were recommended for funding but had their applications rejected during an emergency meeting on 2 February.

She said the five selected organisations that had their funding decisions reversed – Birds of Paradise; Catherine Wheels; Dunedin; Lung Ha; Visible Fictions; and Stellar Quines – were chosen because they either scored the most highly, or fulfilled specific equality objectives.

Thomson admitted it was a mistake for Creative Scotland not realise the importance of regular funding status, which guarantees funding for three years, and that a new touring fund would not be seen as an adequate replacement.

“I’m sorry if we got the balance wrong,” Thomson said. “The squeaky wheel getting the grease is how someone described it to me… it sets a precedent. On the other hand, I don’t think any organisation or body shouldn’t listen to feedback coming back and take a balanced judgement.”

He also confirmed there was no more room for the other unsuccessful applicants that had been recommended for funding to be admitted into the network.

Ross Greer, a Green MSP, questioned whether the board was aware of potential factual inaccuracies in bid assessments, which had been communicated to Creative Scotland by some organisations following funding awards. He said errors in the process would surely have had a “material impact on funding”.

The two Creative Scotland representatives said the board did not meet to discuss factual inaccuracies, and both were unaware of any potential inaccuracies prior to the emergency board meeting.

Archer added there had been complaints about the accuracy of the process, and “we’ve not concluded that process”.

Archer also announced a root and branch review of Creative Scotland’s funding processes, but would not confirm whether this would be conducted in-house or independently.

McAlpine criticised this, saying it was strange to announce the review without having decided how it would be handled.

The Creative Scotland chiefs were also challenged on the decision to include sector support organisations in the Regular Funding network, with the convenor saying this was a case of “funding bureaucrats instead of artists”.