A real shift in cultural leadership

Tired of a lot of well-meaning talk about creating change for diverse talent in Leicester, Chris Stafford decided to actually do something. He shares the details of Curve Theatre’s ambitious cultural leadership programme. 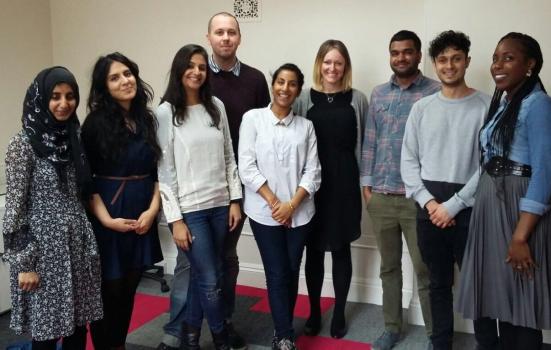 We launched the Curve Cultural Leadership Programme (CCLP) last October as a two-year programme aimed at early career Black, Asian and minority ethnicity (BAME) arts leaders from across our region. We hope the programme will not only strengthen arts leadership but also provide pathways for these talented managers to take senior positions in our sector.

Leicester truly represents twenty-first century Great Britain – almost 50% of our population is made up of people from BAME backgrounds – and so it felt only right that we should take a leadership role in helping shape the landscape for these leaders.

We came up with the idea of the programme after sitting in many conferences and discussions about how we bring about positive change for BAME talent. While conversations were all well-meaning, in order to bring about true change I felt we needed to take action and actually do something.

Although there are many similar schemes running up and down the country, this programme is a first for Curve and Leicester and I believe it can bring about a real shift. And so, with support from Arts Council England and in partnership with De Montfort University, CCLP was created.

We knew from the start that we wanted this programme to be hands-on, connecting emerging BAME talent with inspiring leaders and cultural figures, so they could learn and forge useful connections. I was a Clore Fellow seven years ago and know the impact hands-on learning can have in the context of leadership development.

After a rigorous interview process, we selected our cohort of seven arts managers to take part in the programme. As well as making sure we felt each candidate was suitably experienced and could bring something special to the programme, it was equally important that we formed a group of individuals that would be able to work together and learn from each other.

A programme of opportunities

So far, the participants have spent almost 500 hours with cultural leaders and industry professionals in over 30 learning seminars, two intensive weekends and two city visits.

During the weekly seminars, we’ve been able to offer participants learning on subjects ranging from emotional resilience and team leadership through to strategic planning and fundraising. While at the intensive weekends, participants have taken part in practical sessions on core skills such as media and presentation training.

Although the majority of the programme has been carried out in our theatre in Leicester, the programme has taken the participants to other cities, gaining alternative perspectives and insights from leaders working across a range of different artforms. In March, the group travelled to Hull and spent three days visiting organisations and meeting leaders to explore the cultural and economic impact the City of Culture status brings to a region.

The participants later headed to Dublin for the Live Collision Festival, where they learnt from leading arts figures in Ireland, including sessions on the successful use of the arts to enact change in areas of low social and economic development.

We also wanted to provide participants with the opportunity to develop their individual leadership style and consolidate their study with the guidance of a dedicated mentor. These ongoing face-to-face and phone meetings are now well underway with inspirational creatives.

Now that much of the seminar-based learning has been delivered, and the participants have been working closely with the mentors, they have started spending time shadowing leaders in cultural organisations. As well as Hull 2017, City of Culture, other placements include the British Council, the Royal Court Theatre and the Barbican, exposing the group to some of the best leadership structures and organisations in the sector.

The programme was always designed to not only lay the foundations for these leaders, but to provide a real kick-start to the next phase in their careers. For this reason, each participant is currently working on their own project as part of the programme that they will carry on into the future.

One example is Samuel Javid’s project ‘No Fixed Abode’, a producers’ collective which seeks to engage students and young professionals in Leicester with new and high-quality cultural experiences, increasing civic pride and graduate retention.

We’re pleased to see the impact of the programme being felt already. Thanks to connections made in the programme, some of the group have been encouraged to take up board positions. One participant, Charis Betts, has worked to deliver a series of Caribbean carnival workshops and performance experiences for children with disabilities in Leicestershire.

The future of the programme

Over the next 12 months, the participants will continue to meet regularly with their mentors and work on their own projects and secondments, developing real, hands-on skills that they will be able to put to use throughout their careers.

Chris Stafford is Chief Executive of the Curve Theatre.
www.curveonline.co.uk