‘Re-veiling’ commemorates the truth of statues

We often don’t notice statues of people, but they are part of our cultural history. Who are they? Why are they there? And where are the women? These are questions that fascinate Wanda Zyborska. 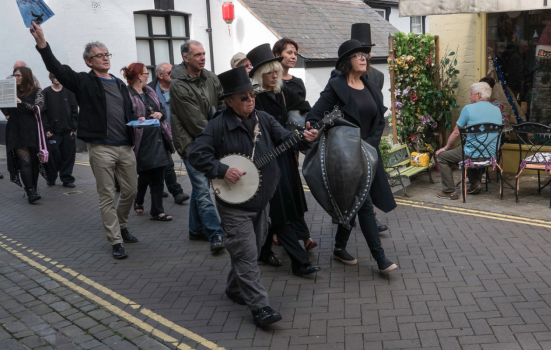 When I began asking these questions in the 1990s, I found a story of power and money. I was moved by a tiny plastic sculpture of the Virgin Mary by Tania Kovats in which she is covered with a condom. It’s a brilliantly simple condemnation of both the birth control policy of the Catholic church and the objectification of women through the virgin/whore dichotomy. 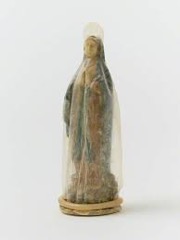 Compare this with the enormously tall Marquess of Anglesey's column in Wales. Standing 37 metres high it dominates the landscape - a constant reminder of a powerful landowner, of privilege and of the class system.

The two works illustrate differences in the representation of the sexes in Western art. The virgin is small in scale and is not a real woman. Rather she is an idealised repository for female virtues - chastity and motherhood miraculously contained in the same being.

Galleries are full of paintings of naked, idealised imaginary young women and portraits of real old men. Less than two percent of public statues are of real women or people of colour.

Most public sculptures in the UK are of real men like the Marquess, often far from ideal, who have gained money and power through birth and industry, many of them as we now know, from the slave trade. So, I began to make ‘re-veilings’ of these imperialist sculptures – virtually - as they were inaccessible, being miles away and on tall plinths or columns.

A colonial statue commissioned in a post-colonial era

In 2011, Denbigh Council in north Wales commissioned a statue to commemorate HM Stanley. Born in Denbigh, Stanley was a white 'explorer' who followed the Congo River to its source in 1877, a brutal journey in which 65 of his bearers died. Documents from the period attest to his cruelty. Protesters questioned why such a statue was being erected in 2011, in a supposedly post-colonial era.

I was surprised at the style of the proposed statue: a heroic sculpture celebrating Stanley without questioning his role in the brutal history of the Congo. It looked like a Victorian bronze, not a contemporary artwork. The only contemporary thing about the statue was the egalitarian way that it was not on a plinth or column but the same level as the people viewing it.

I signed a petition against the Stanley sculpture, which failed to stop it. In protest, I realised I could stage a low-cost intervention without the need to apply for funding, by covering it with a condoms: by re-veiling it. At ground level, I could reach it to measure up, and later try on the half-finished rubber sculpture to check that it would fit.

The re-veiling of the HM Stanley 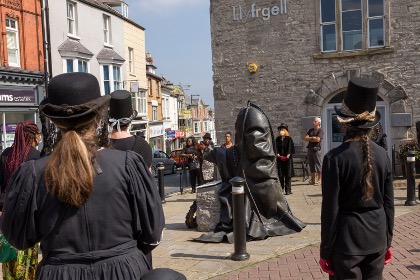 I devised a ceremony for re-veiling, based on a New Orleans funeral. Musicians accompany the funeral procession through the town to the sculpture, where it is ceremoniously covered with a giant condom in a symbolic attempt to contain ideas and actions that ignore the suffering of others.

A wreath for the Congo dead is lain on the plinth, referencing Remembrance Day poppy wreaths. The rubber used in the re-veiling is symbolic too as rubber was one of the most valuable commodities exploited in the Congo at that time, called 'black gold'.

But what should be the fate of the statue, and of my artwork? The annual ceremony has always been respectful of the statue and careful not to damage it, but I sometimes felt we should do something iconoclastic like sawing off one of its hands. So, when its future came under discussion last year, I had mixed feelings.  Its existence and the protest had raised discussions that otherwise would not have taken place.

Those of us who perform the ceremony find that each year becomes more meaningful. Each year more of us dress up in funereal garb. New artefacts are added, such as the text placed over the plinth about the history of the Congo covering up the words 'Africa's Greatest Explorer'.

Now, the re-veiling of the HM Stanley ceremony is part of a worldwide movement challenging public statues of slave owners and colonialists. It aims to draw attention to the legacy of exploitation in countries like the Congo. The Black Lives Matter movement has reminded us how the inherited wealth, values and guilt from that period still influence our culture, our institutional structures and our deeply held beliefs today.

In 2021, following the Welsh Government’s audit of commemoration relating to the slave trade, the people of Denbigh are voting on the fate of this statue. Some of the protestors want it removed. But I think it’s important to keep the true history of those times visible - with all its conflicts, contradictions, illusions and horror.

It is not enough to add some contextual writing, text alone will not outweigh the power of the visual celebration of heroic colonialism. When the HM Stanley statue is subject to the annual funeral performance, it becomes something more nuanced and thought provoking.

Whether it is kept in place or moved to a museum, it should include the full visual history, including the condom sculpture, the wreath and the alternative plinth. Both artworks should remain together, or disappear together. The eventual fate of the HM Stanley statue in Denbigh will symbolise what kind of society and future the people of Denbigh want to see.

‘Re-veiling’ commemorates the truth of statues