Frank Lyons explains how a combined academic and artistic approach has been key to the success of a new ensemble featuring disabled and non-disabled musicians. 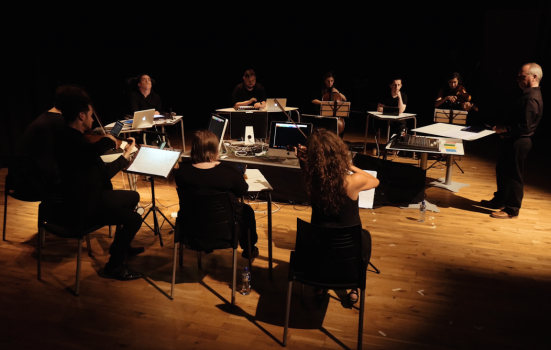 Inclusive Creativity began with a conference at Ulster University in Derry as part of the UK City of Culture celebrations in 2013. We brought together existing and new collaborators including innovators in music, disability and technology Drake Music, Share Music Sweden and Derry-based Walled City Music, as well as leading academics and practitioners. This two-track academic and artistic approach has since been carried through into a range of research projects including Sharing the Stage and NonZeroSum.

As part of these projects, we formed the Acoustronic ensemble, a mix of disabled and non-disabled musicians. They meet weekly to improvise, compose and perform using digital and acoustic instruments. A team comprising undergraduate, masters and PhD researchers works with the ensemble to investigate digital instrument-building and compositional and improvisational approaches in inclusive music settings.

One key imperative has been the need to develop a new repertoire for inclusive ensembles. This has led to a range of exciting initiatives to train emerging and established composers in specific techniques and approaches. Through collaborations with St Magnus International Music Festival in Orkney and the Walled City Music Festival, we have run composer workshops that have generated a number of new pieces.

The first stage of this process took place in Orkney in 2016, involving three young composers from the Royal Scottish Conservatoire who worked intensively with Acoustronic member Jay Hagon and cellist Clea Friend to explore new digital instruments and compositional techniques.

These pieces were subsequently developed as part of a composers’ workshop hosted by the Walled City Music Festival last year and featuring the full NonZeroSum nine-piece ensemble. This full-day event featuring six substantial new pieces was a considerable logistical undertaking, requiring an extensive set-up and constant variation of the digital instruments required by the composers.

At the centre of the NonZeroSum project is a new piece that I was commissioned to write for Acoustronic and the Benyounes string quartet. New pieces from the composer workshops and George Crumb’s ‘Black Angels’ were performed in Derry, London and Dublin and will feature in a concert in Lisbon this month.

The artistic quality of the performances of the new repertoire, given in mainstream venues to international audiences, has resulted in the realisation of a number of our goals. Taking the ensemble on tour has been logistically challenging but has provided positive life-changing experiences for the musicians, their carers and the support team behind the operation.

The collaboration with Drake Music has also driven the development of a new instrument, the Kellycaster, specially designed for one of the musicians John Kelly.

We have delivered conferences across the UK and Ireland, as well as in Sweden and Portugal, presenting our artistic practice and research findings. We are now working with a number of education institutions on integrating principles into new curricula and research projects. Most importantly, we continue to create original art in genuinely inclusive settings.

Frank Lyons is Director of the Arts and Humanities Research Institute and Head of School of Creative Arts and Technologies at Ulster University.
www.ulster.ac.uk