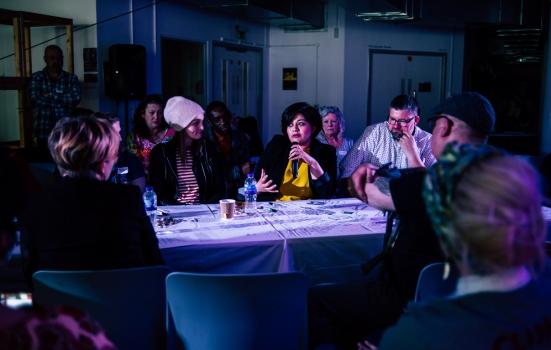 The Power of Community - a CPP network event hosted by Revoluton Arts.
Photo:

For a long time, ‘leadership’ has felt like tender spot in the sector, with increasing pressures on individuals at all levels – and it’s one I’ve poked at a number of times through my research. Surely, I kept thinking lately – inspired by reports such as Collaborate’s Exploring The New World – this is the time to consider leadership as a systemic issue in culture, rather than a shopping list of ‘must do better’ topics?

So I was chuffed to get the chance to do a little of that and examine leadership approaches across the Creative People and Places (CPP) network. For my research, I interviewed people from all 21 CPP projects, plus some ‘alumni’, some social sector leaders and thinkers. I also read a massive pile of the even more massive mountain of writing on leadership. My work has also been informed by a collaboration between the CPP network and Clore Leadership on a leadership development day. The research is now at an advanced stage and a paper will be published here.

Just as CPP responds to the results of particular systems rather than local ‘failures’ or lack of creativity – evidence from ‘low engagement’ areas suggests under-valued abundance rather than a deficit – leadership patterns in the 21 CPP places can also be seen as part of a broader system. In leadership terms, those systems have sometimes been distorted by hierarchy, by target-driven behaviours, and by a lack of connection and collaboration. A tendency, especially amongst boards, to want leaders to provide what you might call inspiring, transformative stability – often in the name of artistic vision – has led to slow progress on diversity and equality.

At its best, CPP has injected new, more open and collaborative leadership into those systems. It has been ‘in the room’ with its vision, and involved people beyond the usual suspects. (This approach is now deepening at governance level in some CPP places, with independent community members joining the consortia discussions that guide each place’s work.) It has also been conscious of those not in the room, and sought to host new conversations. It has brought an approach of ‘saying yes and’, as part of its action research ethos. CPP places may be demonstrating what Graham Leicester wrote in a prescient paper for Mission Models Money in 2008: “We are more likely to act our way into a new way of thinking than think our way into a new way of acting.”

It would be misleading to say CPP leadership approaches are all successful all the time, all the same, or unique within the social or cultural sectors. What I have found, though, is a distributed model of leadership, rooted in connection and learning. The network has built on strands of leadership thinking that might be called de-centralising and ‘anti-heroic’. It has multiplied the number and range of people involved in leadership within the community, and within the systems active in the places.

Knowing the people and place, connecting people and ideas, and building trust have been crucial. Those involved tend to see leadership as a non-linear, sometimes messy, practice – not simply a set of skills or actions to be ticked off. CPP has built teams which include a wide range of voices and backgrounds. The leadership across the network has a much higher proportion of women than is typical, with flexible work patterns common, and there are examples of progression from non-traditional backgrounds. The teams are generally small and there is often back office support from host organisations. This situation can allow a greater external partnership focus, especially where the host is a non-arts organisation.

CPP leadership can be described a team game, a collaborative effort of people working for each other and the collective across different groups, personal backgrounds and styles, and power dynamics. This is challenging in at least two senses.

Firstly, it challenges deeply ingrained, dominant models of leadership, accountability and control. Does the buck have to stop at one person’s desk? Maybe not. Maybe that idea reflects deep patriarchal and managerial structures, even when it’s trying to be helpful. Maybe any business or group would be stronger if we all acted as if the buck stopped with us. Maybe, as one of the leaders in the Gulbenkian Foundation booklet ‘What would Joan Say’ comments: “The most powerful thing that I or any leader in the arts can do is to lose control. That parental relationship… is so dated, it’s not surprising that the programmes and ideas are so cyclical and narrow in their scope.”1

Secondly, it’s challenging for the people involved. It’s hard work disrupting dominant models. You may come up against people who prefer to hold on to patriarchal, controlling models. You may come up against people who are not yet ready to move from dependence to owning the power they have themselves. My conclusions tend to agree with a recent and inspiring blog about ‘empowering’2, though I do wonder if a positive aspect to that word remains when people come together to find, tap into and define their own power.

I want to reiterate that CPP is not unique in this, but part of a progressive movement you can see all over the UK – of people developing and modelling leadership in more productive ways than archaic, heroic, individual-centred models. I contrast the example I was given of a Chief Executive who preferred to meet people of equivalent job status, with that of the Artistic Director I saw quite naturally handing out ice cream, shifting tables and clearing up as part of hosting a conference this year3. One, I believe, was living in the 19th century, the other in the 21st. How far the collaborative, distributed model can displace control, targets and ego may depend on our collective ability to multiply leadership in the next decade. 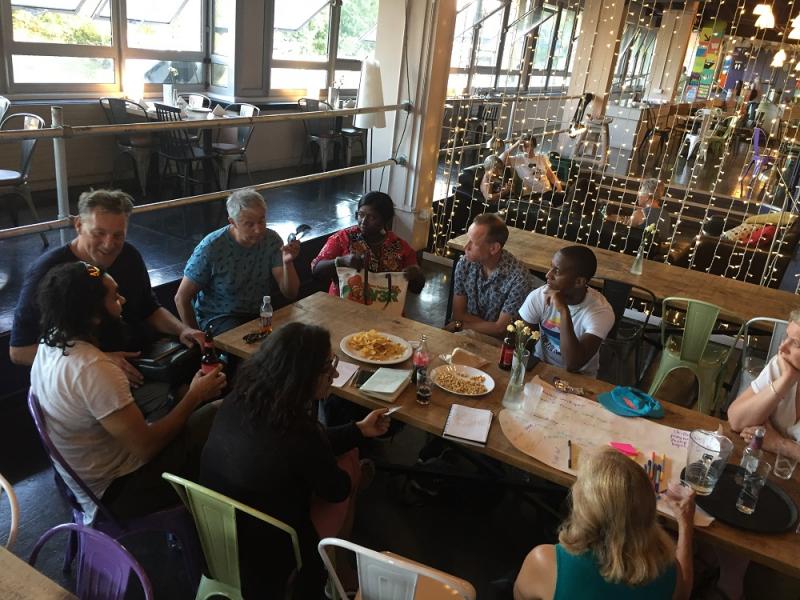 The canny reader will observe the omission of names from examples given above. This is not to avoid giving credit, but to illustrate the tension around ‘heroic’ leadership, even as we seek something more collective or collaborative. My every impulse was to name (1) Madani Younis, (2) Stella Duffy and (3) Alan Lane and any number of CPP leaders, as I really want to credit those providing singular examples of leading collective effort…. but if we need to think less about Leaders and more about us all being part of Leadership – if indeed we need that word – we may need to wean ourselves off so much learning-by-example. This was a tiny experiment in that.

Multiply leadership, not leaders
Building resilience
Experiences of excellence
New ACE strategy: Keep calm and carry on…
The business case for diversity in building adaptive resilience
The evolving truth
Angels on a pinhead