Visitor numbers may have grown, but the diversity of museum-goers in London has hardly changed over the past ten years. James Doeser and colleagues suggest what new research is needed if London’s museums are to understand how to attract new audiences. 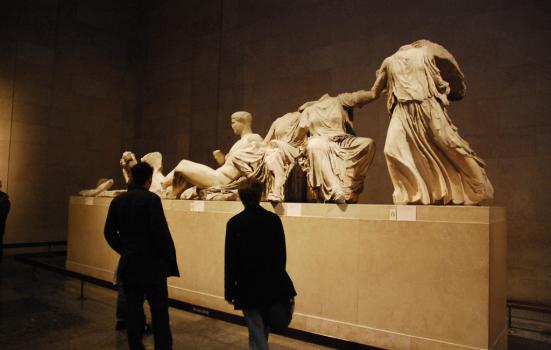 Earlier this year Creative Works London and I gathered together a room of experts to fashion an audience research agenda for London museums. There were a number of surprising themes. Sure, the who, when and why questions about visits and visitors persist, but much of the talk was about how museums are viewed by their board, staff, friends and the wider public.

The proportion of visitors in under-represented groups hasn’t really changed in spite of all the encouragement from government, funders and within the museum sector

Another strong theme was how museums can get themselves (staff, board, volunteers) better aligned on matters of mission and purpose. The message was a challenging one for us researchers: “It’s all well and good giving us the facts, but we need help to make them stick and to provoke change in our institutions.”

We began with two historical questions: How have visitors to London’s museums changed over the past 15 years? And how have the museum-going habits of Londoners changed?

We recognise that London itself is not a homogenous place when it comes to museums and museum-going, as Orian Brook recently demonstrated in AP and as data from the Active People survey shows. 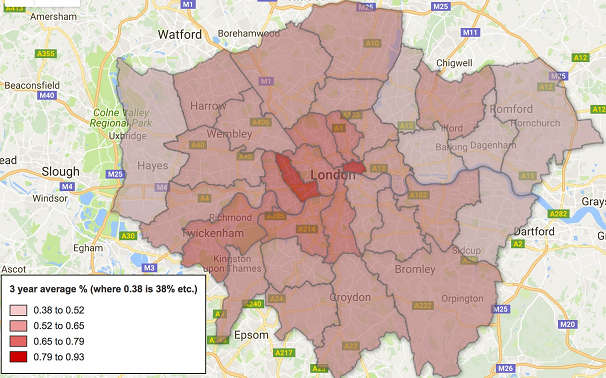 The Taking Part survey has collected data on museum-going since 2005 and has highlighted a few relevant and persistent trends over the last decade:

The Target Group Index (TGI) survey was the preferred data source before Taking Part got going. It used different methodologies so we focused on trends rather than the differences between the two surveys, but by plotting the two data sets together we arrived at a long-term picture of museum-going in England. 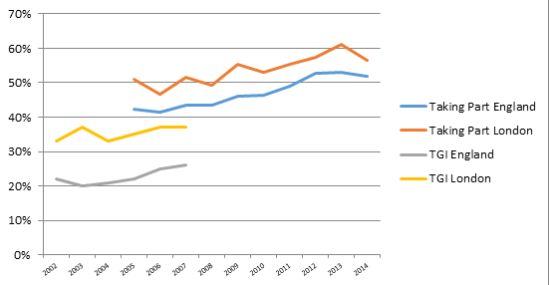 Over this period there have been unprecedented levels of funding and public policy has been directed at increasing museum attendance. Such interventions have included:

Audience research has been crucial throughout this period to grasp the baseline levels of museum attendance, to understand what factors might act as barriers and motivations for people to attend museums, and to measure the relative success or failure of policies and programmes to increase attendance.

In general, we find that policy, research and extra resources have done much to increase attendance overall and revolutionise the galleries, exhibitions and additional programmes that many museums offer. However, it has not really resulted in a concomitant change in the profile of the museum-going public, neither among Londoners nor the population as a whole. A deeper dive into the Taking Part data shows that visitors remain predominantly white, middle-class and able-bodied, at least more so than the population as a whole.

Who are the visitors to London’s museums? This is actually a much harder nut to crack. Museums, especially ones without an entry ticket or box office system, do not consistently collect data like other parts of the arts sector. So there hasn’t been a consistent methodology, and many museums haven’t been all that motivated to collect demographic data about their visitors.

The Taking Part survey, although helping government assess the impact of its policies, does not actually distinguish between subsidised and non-subsidised museums. So respondents may well give the same answer whether they have been to the Tate Modern or Madame Tussauds or if they visited a museum when away on holiday.

We pieced together what we could and were given a huge boost by some anonymised data from strategic research consultancy Morris Hargreaves McIntyre (MHM), which had collected data from many of the big national museums in London. The British Museum and the South Kensington institutions so dominate the London museum landscape it’s vital that their data is in the mix.

MHM found a huge variation between the major national museums in the capital, and not many discernable trends. Proportions of visitors with disabilities, from ethnic minorities or lower-socio-economic groups wobble up and down a few percentage points but there isn’t a particular trend up or down.

Visitor numbers at the major national museums in the capital have increased substantially in the last ten years, but the proportion of visitors in under-represented groups hasn’t really changed in spite of all the encouragement from government, funders and within the museum sector.

We identified the main themes where there were unanswered research questions, and where we felt museums should pay greater attention. These were the research process, socio-demographic factors of museum audiences, decision-making about museum-going (both in terms of human dynamics and also in terms of the ‘offer’) and visitor behaviour.

None of these are especially London-centric questions and the numbers from national surveys and specific institutions may in fact mask any London-specific stories. It would be fascinating to know whether there are London-specific factors that influence the behaviour of Londoners when it comes to museums.

Is there something about the type of people who live here, the schools system, the transport infrastructure, the household composition or the multicultural nature of the place that gives Londoners a distinct attitude and behavioural outlook to people outside the capital?

Or is it that there is a greater supply of museums in London than elsewhere? This is something we hope to address in future research.

I have expanded a bit on this article and posted more information about the seminar we hosted with London museum audience research people here: http://jamesdoeser.com/creative-works-london-museum-audiences/