A long and tough journey

For Joe Mackintosh the first three years of the Creative People and Places investment programme has passed in the blink of an eye against an agenda that is generational in scale. 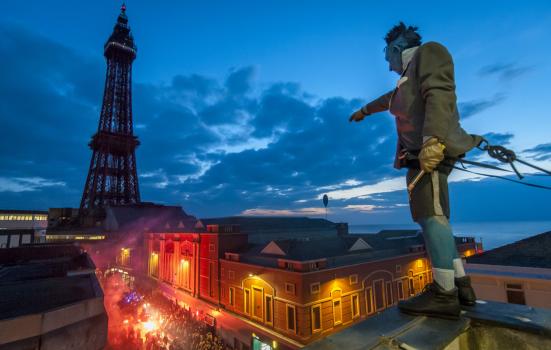 I’m in a reflective mode this autumn, having just produced the tenth Out There Festival of Street Arts and Circus in Great Yarmouth, my twentieth year of working in the town. SeaChange Arts is now an National Portfolio Organisation based in a neighbourhood ranked the twentieth most deprived out of about 32,000 in England.

It has been a long and tough journey. And I’m not alone. In September, Arts Council England (ACE) published its review of the first three years of Creative People and Places (CPP). CPP is a £37m investment programme for places of low engagement with the arts that, so far, has reached 21 local authority areas of the 71 ACE classed as being in the bottom 20% of the 354 areas in England.

Great Yarmouth is not actually a CPP location, although I have worked with a number of them as well as in other areas of low engagement. The findings of the report are generally positive and chime with my experience, although the big picture in terms of engagement requires radical longer-term thinking. Three years is the blink of an eye against an agenda that is ‘generational’ in scale. But steps in the right direction are to be recognised and applauded.

The CPP review is encouraging. People are genuinely engaging. Over 1.45 million attendances through 3,099 events between 2013 and 2016, with 91% of those people low or medium engagers – people want it. There’s a healthy mix of activity across the board and it’s worth noting the strong role played by outdoor arts.

Almost all of the 21 locations have used free public outdoor arts events as a key part of their programmes, which account for over half the attendance figures. My own work in street arts arose from a realisation of the extraordinary efficacy of outdoor arts in engaging broadly, and particularly those otherwise hard to engage. Outdoor arts is still relatively embryonic in the UK, but it merits strategic development into a regular mainstream part of our arts offer and there’s a compelling case here.

There are also encouraging findings in regard to artistic quality. Programmes in the different locations are diverse, mixing work with local artists and groups with national and international work. Accompanying this is an intelligent reflection on the meaning of ‘quality’ – that the relevance and resonance of work to audiences and communities is part of that. It’s good to see commissions such as IOU’s Rear View coming out of a site-responsive CPP commission and then touring successfully nationally.

The question of how to sustain momentum beyond CPP funding is more challenging. A number of CPP areas are now in a second phase of ACE funding, extending three years of support into six. Some of them have ideas about how to continue activity beyond this and some do not.

Clearly, no magic formula for sustainability has been discovered. Nor could it have expected to be. Ten or twenty years ago, it was the norm to expect local authorities to continue the long-term investment following worthy trailblazing pilot projects. Things have changed.

Successive funding cuts to local authorities have severely reduced their ability to invest in non-statutory services. The LA funding formulas have meant that the most deprived urban areas have been the worst hit, with the least spending power. And while the majority of councils have managed this as best as they can, we are only half way through the implementation of the planned cuts.

ACE has always emphasised the necessity of partnership with councils, refusing to be the funder of last resort to keep them at the table. But in future years, as the ability of the poorest areas to invest in any non-statutory activity is reduced towards zero, what can they do? Walk away and only invest in the wealthier areas with plenty of matchfunding?

Blackpool is a good example. The Leftcoast CPP scheme was one of the first to receive funding and its plans to sustain investment beyond CPP include the capital investment in an ‘art hotel’ to trade commercially and the possible establishment of a ‘Culture Company’ for Blackpool into which the council may put valuable revenue-generating assets such as car parks. These are not easy tricks for all to replicate – capital investment can’t be whistled out of thin air.

This country has a way to go in recognising the extent to which some communities and places feel they have been abandoned or left behind by way of public investment and development for decades (not just in terms of arts and culture, but certainly including it), and the profound effects this has on populations, businesses and economies, education, talent retention and environment over generations.

The strong Brexit vote in Great Yarmouth and other less affluent (and strong Lottery ticket-buying) areas came as no surprise. Addressing the long-standing inequities in geographic deployment of public money for the arts will ultimately require a long-term commitment to rebalancing investment. This requires vision and commitment for 20 years or more.

It’s good that five or six years ago ACE started to take interest in these places. Let’s hope it and other national bodies can start to think in generational terms of ‘great art for everyone’ and the profound impact that would have on our sector and our country.