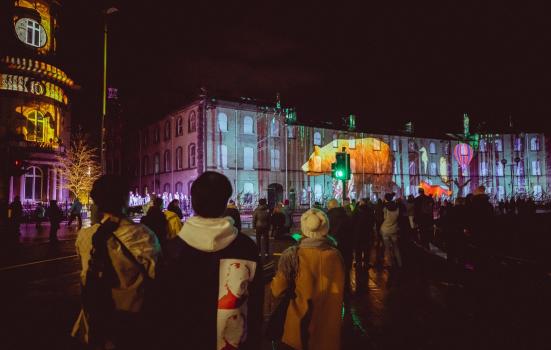 City of Culture 2017 put Hull on the map – literally. For many, one of the most significant achievements of the year was the appearance of Hull on the BBC’s weather map. It was day-to-day living proof of what we knew and wanted to prove: that Hull matters.

We had a business and retail sector that really understood the importance of culture, and the city’s education sector had experienced first-hand the impact of creativity on its young people. The health sector had invested in cultural projects because it saw their clear benefits to mental health and wellbeing.

By the end of 2017 Hull had a pride-inspiring public realm; a state-of-the-art, 3,500-person music and events complex due to open; a refurbished New Theatre for large scale tours; an impressive collection of cultural organisations; significantly increased audience and participation figures; and a population wondering 'what’s next?'

Absolutely Cultured was formed at the beginning of 2018 as the successor company to Hull 2017, albeit with a much less comprehensive brief. It was clear from the outset that there were post-year challenges.

The first challenge of 2018 was dealing with exhaustion. Many artists and cultural bodies had pushed themselves to the limits in the build-up to the year and the year itself. They needed time to take stock, breathe and recharge. The second challenge was managing expectations: it seemed impossible to avoid the disappointment of a diary that wasn’t filled with an almost overwhelming choice of cultural events and spectacles, great and small. Frustratingly, it seemed equally impossible to get people to see there was far more going on than had been the case before 2017.

No one would deny that there were tensions in Hull in 2018. ‘Burnsy’ – BBC Humberside’s challenging presenter – regularly grilled arts leaders and local politicians on why there was “nothing happening”. Debates about who ‘owned’ legacy and who should be driving the city forward rumbled and raged. It wasn’t a happy year for many.

Legacy is a tough nut to crack. Cities of Culture set out to change people’s experiences, ambitions and expectations. But those changes take a while to settle, and everyone needs time to watch, listen and learn new ways of being. In Hull we didn’t build in time to digest and reflect, nor ways to share our experiences. We didn’t understand our collective responsibility for legacy. But we’re getting there now.

By the end of 2019 we were beginning to understand the changed landscape and possibilities were opening up. Some developments were dramatic, like a £13.6m investment from the National Lottery Heritage Fund in Maritime Hull. Others reflected more subtle changes, like an increase in cultural content from BBC Radio Humberside because, as Managing Editor Martyn Weston put it, “now there are high levels of engagement in things that have a cultural slant”.

We were also looking at a more connected cultural community. The 2017 Creativity and Place Strategic Advisory Group was reframing itself as one of the country’s first Cultural Compacts, where partners from across city government, culture, business, and higher education sectors unlock the full potential of culture to promote thriving communities and drive economic growth.

For Absolutely Cultured, the transition years of 2018 and 2019 saw, amongst other things, ground-breaking exhibitions, national partnerships, and the continuation of a celebrated volunteer programme. Throughout this the company has continued to ask: what were the achievements of 2017 that we should strive to build on? We must consider what the city needs, where can we have the greatest impact, and how we build partnerships that make legacy a collective responsibility.

Of course, the pandemic has affected our plans and aspirations, as it has with everyone. But the questions we have been asking ourselves are even more relevant now. We’re finding ourselves in more and more conversations about how we can work with our cultural colleagues, as well as with health, education and businesses across the city, to become part of the social, economic and cultural recovery.

We recognise the need for culture to reflect the priorities of place; now more than ever culture must feel relevant to peoples’ lives. We aim to strike a balance between city-centre based events and the work we do within neighbourhoods to bring more opportunities to people where they live. We’re looking to build on the achievements of 2017 and see where we can nurture and retain more local talent by developing a multi-faceted learning programme with stronger creative career pathways. Hull’s ambition is to be recognised as a world-class cultural city. We see our role as creating space to innovate, test less traditional models, and share risk.

2017 changed perceptions of Hull internally and externally, but it’s not “job done”. It is our collective responsibility to grow the city’s aspirations and ambitions and allow them to be realised.

Lee Corner is Chair and Stephen Munn is CEO and Artistic Director of Absolutely Cultured.