Is the future of digital theatre in the balance?

Over half of publicly subsidised theatres that streamed performances during the pandemic have reverted to in-person performances only. Richard Misek has been investigating why. 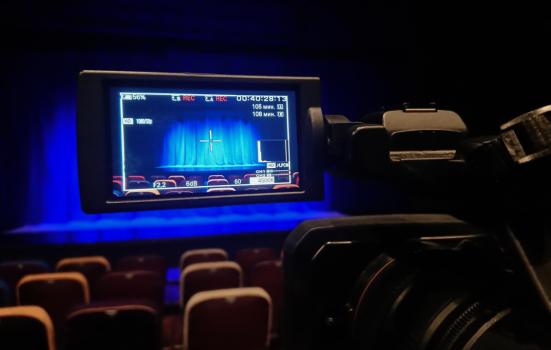 Research conducted last month as a part of an AHRC project on digital access to arts and culture that I’m leading suggests that 123 of the UK’s 219 publicly subsidised theatres and theatre companies streamed one or more performances in the first 18 months of the pandemic; but only 58 are doing so this autumn.

Some may shrug their shoulders and see this as evidence that theatre is simply going back to its main role of filling seats. However, a tide of recent evidence suggests that the last 20 months of digital activity has brought significant benefits for d/Deaf, disabled and vulnerable people. And my project is also registering examples of digital activity that have benefitted geographically isolated, neurodiverse, low income, and both younger and older audiences.

From this perspective, the apparent failure of many recent experiments in digital theatre to develop into hybrid live and digital programming is bad news. But headline statistics can often conceal important nuances. Here, I revisit the data and contextualise it with insights from interviews carried out as a part of our project.

Over the last ten months, we have carried out 37 interviews with artistic directors, curators, and managers at organisations from across the UK’s arts sector. This is of course a relatively small sample, and it also extends beyond theatre, so is not a perfect like-for-like cross-reference. However, it is notable that though most of the organisations (including most theatres) interviewed have scaled back their digital activities this autumn, almost all have still expressed enthusiasm for extending their digital activities in the future.

Various interviewees discussed specific longer-term digital projects that have not yet reached fruition, which highlights a key limitation of our headline statistic: it’s only a snapshot of a specific period in time – the autumn season – from September to December this year. It doesn’t t register projects going public from January onwards and says nothing about the on-going digital capacity-building taking place behind the scenes across the arts sector.

Rather than suggesting a widespread intention to abandon digital programming, the interviews suggest that much of the autumn slowdown reflects more mundane logistical barriers to continued digital activity. Factors cited by interviewees include a lack of time and human resource, a need to focus on the needs of returning physical audiences, uncertainty about what kind of content is most appealing to online audiences, and – most of all – limited revenue and funding opportunities.

Online performances still don’t, and perhaps can’t, bring in the same revenue as dynamically priced physical seating. The evidence from video streaming in film and social media, for example, suggests that content only becomes profitable when it reaches mass audiences. But this aspiration is out of reach for all but the highest profile theatre companies. Meanwhile, the Culture Recovery Fund is ending and core funding that might have been reallocated to digital projects is now being allocated back to live programming.

Seen in this context, the half-empty glass of the headline statistic begins to look half-full. The fact that 26% of publicly-subsidised UK theatres and theatre companies are putting performances online this autumn – even though venues have re-opened, emergency funds are drying up, and the sector is facing extensive staff shortages – is quietly impressive. At the very least, it suggests that, though digital theatre is not yet firmly established as a majority activity, it has at least become a mainstream activity.

However, behind this modestly positive headline statistic, there is another – more concerning – figure to consider. When we divided our results according to organisations’ scale, we found a significant disparity. While 58% of large theatres and theatre companies that have streamed performances online during the pandemic are still doing so this autumn, only 20% of small and mid-sized theatres and theatre companies are doing so.

Similarly, while over 50% of theatre venues that previously provided digital performances have continued doing so, the figure drops to 32% for (typically smaller) touring companies. Initial work on extending this analysis suggests that these disparities are echoed across other artforms too.

How to interpret this finding? It’s hard to avoid the suspicion that these disparities in digital activity are strongly influenced by disparities in funding. In a follow-on survey sent to our interviewees, we asked how they funded their digital activities. The most common responses were core public funding (77%), Culture Recovery Fund (46%), and monetisation of content (46%). All three of these sources of income skew strongly towards large, culturally prominent organisations.

Key your eye on the prize

Together, these results suggest that any consideration of digital access needs to encompass not only audiences but also arts organisations themselves. Audiences’ access to digital arts and culture is dependent on arts organisations’ access to equipment, skills and time that allow them to deliver digital content. The limited access of many arts organisations to adequate funding for, and their inability to generate adequate revenue from, digital projects results in the exclusion of audiences from opportunities to engage with art.

How do we address this potentially vicious circle between organisations’ and audiences’ limited access to digital arts and culture? One answer is for arts organisations to keep their eye on the prize. In our survey, the main goals of their digital activities were (in order): accessibility for d/Deaf, disabled, neurodiverse, and vulnerable people (93%); geographic access (86%); reaching younger and/or older audiences, and increasing audiences’ cultural and ethnic diversity (71% each).

Digital programmes that actively address the needs of these and other historically excluded groups need to be incorporated into organisations’ wider access and inclusion activities. In turn, the success of digital programmes needs to be measured not only by the size of their audiences and the economic value they generate, but also by the social value they create.

This would be easily done, but for the fact that – for all but a small minority of arts organisations – digital programming is not cost neutral, and probably never will be. This prompts the questions: how much will is there among arts organisations to continue incurring the costs of digital programming for the sake of its potential access benefit? And how much will is there among funders to help underwrite these costs? The future of digital arts and culture may depend on the answers to both these questions.

Dr Richard Misek is Senior Lecturer in Film and Media at University of Kent.

Is the future of digital theatre in the balance?