Home Live Art’s interactive literary salon event sold out quickly, but when she met the audience Mimi Banks was surprised. She reflects on the difficulties of marketing interactive live art. 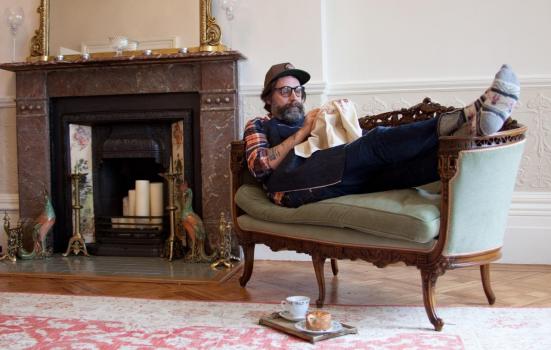 One of the 'Boy Stitchers'
Photo:

At Home: a 21st Century Salon took place at Angel House in Brighton, taking the form of a traditional-style literary salon – a gathering of people under the roof of an inspiring host, held partly to amuse one another and partly to refine the taste and increase the knowledge of the participants through conversation.

The 21st century ingredient was exploring contemporary concepts of home, family roles and stereotypes through a range of multidisciplinary performance art pieces.

As producers we spoke to a number of people attending who really understood the concept, got the subtle subversions of gender stereotypes…

We presented five works for audiences to engage with in different ways. The ‘Boy Stitchers’ project, curated by Trevor Pitt, took place in the master bedroom where four male artists were doing needlework. Audiences sat informally on the carpet or on the bed, listening to them discuss their practice as they stitched, which sparked many lively conversations.

‘A Memory of Bricks’ by artist Seth Kriebel took place in the downstairs parlour room. Groups of 30 took part in a performance memory game collectively determining the outcome of an imaginary journey through the house.

An audience of 90 people visited for a two-hour set, and aside from having specific times to engage with two time-based performances, they were encouraged to discover the installations and performance interactions at their own pace, as well as take the time to have a drink, enjoy their surroundings and socialise with the artists and the owner of the house (the host).

At Home was promoted as part of the Brighton Festival programme and the shows sold out within a couple of weeks. We thought hard about the information we needed to get across to audiences: it was taking place in a house and home, they would be engaging actively with performances, and it was to be a quiet, relaxed event generating ideas and conversation.

Obviously thrilled that we sold out so quickly, we were expecting a mixed audience that would be up for a slightly different interactive arts experience. Events like this can divide potential audiences. The knowledge that you are stepping into something that requires more than passive engagement can be intimidating for some and a barrier from booking tickets, whereas for others it offers the thrill of something new and unexpected.

We never underestimate this, understanding the need to strike a careful balance between making experiences that challenge and question without pushing people too far out of their comfort zones. We also recognise that the positioning of this balance is a moveable feast, shifting in relation to the type of audience that you are expecting. A performance (or live art) audience expects challenge while a non-arts audience expects entertainment.

We had a largely positive response from our audience members. One visitor told us: “I liked the atmosphere very much, the low-fi conversational style of the work was my thing. It was a fab house and I thought the curation was very good.”

As producers we spoke to a number of people attending who really understood the concept, got the subtle subversions of gender stereotypes and relished the opportunity to engage in a social way with the artists about their work.

Then there was a very small handful of people who had a strong reaction against it. “Ill-conceived and lazy” was one comment. With further enquiry it became evident that they were expecting some immersive, punchdrunk-type theatrical experience and the low-key aspect was therefore disappointing.

This was interesting to us as it took us right back to the idea of knowing your audience and being in a position to manage expectations. The audience demographic was a complete surprise – one that you’d see at a festival classical concert, and not the mix of ages and social backgrounds that we were expecting.

We quickly realised that some of our audience members had made assumptions about what the event would be like, presumably without looking closely enough at the marketing copy. It was listed in the Festival programme as an offsite site-specific piece, in a magnificent heritage space. It would be interesting to see who would attend if the listing was taken out of the festival programme.

This was our first foray into producing the salon concept for audiences outside a specialist arts niche. We pride ourselves on our expertise around knowing, preparing and looking after our audiences, but we fully acknowledge that this will always be a continual learning process.