A ‘pay it forward’ pilot campaign aimed to help families most in need attend dance theatre performances, but it wasn’t all plain sailing. Rhona Matheson tells the story. 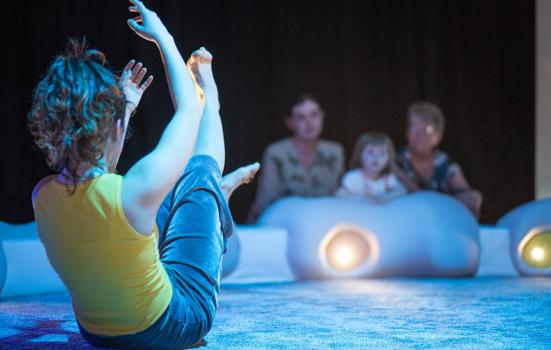 At Starcatchers we specialise in creating inspirational performances and experiences for our youngest children and their parents or carers. Our vision is for Scotland’s youngest children to fulfil their right to engage with innovative, age-appropriate arts experiences regardless of their background.

The Scottish Government Poverty and Income Inequality in Scotland 2015/16 report stated that 19% of children are growing up in poverty. At the same time, other research, including Growing Up in Scotland, consistently provides evidence that access to cultural and creative experiences enriches lives and makes a positive impact on health and wellbeing.

An audit of audience participation that we conducted suggested that 73% of parents rarely engage in cultural experiences with their babies and many have never engaged with their local community arts venue. We found that affordability was a key factor for families with low incomes.

In response, we developed a pilot ‘pay-it-forward’ campaign called Forward for Families to enable families in three communities in Scotland to engage with our touring production, MamaBabaMe, a dance theatre performance for babies and toddlers aged 18 months to three years.

This pilot was delivered in partnership with three arts venues: The Byre Theatre in St Andrews, Platform in Easterhouse, Glasgow and Macrobert in Stirling. Our aim was to raise £800 to cover the cost of tickets for families to attend a performance.

In collaboration with our partners, who would engage with local third-sector organisations and childcare settings, we developed a set of criteria for families who would benefit from the scheme. They needed to be local, have children under three years of age, be unable to afford the ticket price and have not previously attended a performance at the venue.

The campaign was launched in April and ran for six weeks. We promoted it with the partner venues via the press, websites, e-newsletters and through social media. In total, we raised £848, 106% of our target from 63 supporters with the majority of funds coming through a JustGiving page and 6% coming through text giving.

Some venues had stronger existing relationships with local support services, making the recruitment of participating families easier than in areas where these relationships did not exist.

For the Byre Theatre in St Andrews this was the first time in a number of years that it had engaged with early years organisations. As a result, making those connections was resource-intensive and required investment from venue staff. At the same time, it felt this was a positive step and the beginning of a refreshed approach for its audience development.

However, only one family was identified in St Andrews. The low uptake meant we had a surplus of funds available for tickets for the tour. Following discussion, we decided to offer tickets to families local to the Lochgelly Centre, another venue in Fife. We offered 15 tickets to this community, with 14 tickets being used.

Platform in Glasgow approached three early years organisations with whom it had an existing relationship. This made it a more straightforward process and the organisations were able to identify families they felt would benefit most from the experience. The number of seats identified was 64 and 54 attended.

Macrobert in Stirling was familiar with the pay-it-forward approach, having developed something similar on a larger scale for its annual pantomime. It had an existing relationship with Homestart, an agency that works with families in need, and appreciated this additional opportunity to connect with them on this pilot. The number of seats identified was 20 and 20 attended.

The Forward for Families pilot was a positive example of how we can work with partner venues to develop relationships with audiences. The feedback we received was positive and will help our future delivery. This includes having longer lead-in times, gaining additional support in collecting feedback from families, and a better allocation of resource and support to engage and follow up with local organisations.

Having established Forward for Families as a brand, we will continue to build on this pilot as part of the marketing campaigns for future tours. And the small amount of additional funds raised through the pilot will support families to engage with our next live performance, Sprog Rock, this autumn.