A different regeneration story in Bradford

Cultural regeneration in London has seen local communities priced out of their homes, but an arts organisation in Bradford is determined to prove it can work to the benefit of local people and businesses. Bernard Ginns explains how. 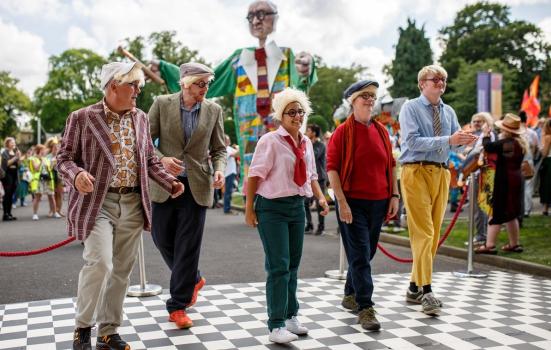 The gentrification of London is a story well told. Whether Peckham or Brixton, Holland Park or Notting Hill, the cycle is often the same. The arrival of wealthy newcomers to more down-at-heel districts is initially positive: buildings are developed, new businesses open and cultural regeneration breathes in fresh life. But then it turns: local businesses leave as rents rise, the social and cultural fabric changes and many in the existing, often socially disadvantaged communities are priced out.

Bradford’s story is very different. The idea of gentrification in one of Yorkshire’s former industrial epicentres is far-fetched to some, but Eleanor Barrett, founder of Bradford-based arts organisation The Brick Box, is seeing signs of change. Barrett and her business partner Rosie Freeman relocated from London in 2016 and are aware of the downsides of urban regeneration.

“The gentrification of Bradford is a long way off,” Barrett says. “But capitalism is relentless and Bradford won’t stay like this forever. At the moment there’s a chance to do things differently.”

The Brick Box launched in 2010. It worked on regeneration projects in London, where the directors witnessed the displacing effects of rising real estate prices at the lower end of the social spectrum. Brixton Village Market was a case in point. The Brick Box organised arts events as the market thrived but soon traditional businesses were replaced by boutique, pricier outlets and less well-off locals started to leave. Today, Brixton is another expensive, homogenous district.

Tiring of London, Barrett and Freeman moved north, impressed by Bradford’s DIY ethos and vast potential of the city centre’s underused spaces in heritage buildings. One of their first projects was a reimagining of the former Marks & Spencer department store site, which had been left vacant after the retailer moved into a new shopping centre.

The pop-up cultural venue called ‘The Wild Woods’ was a commercial and critical success, even if there were grumbles in the comment sections of the local newspaper website. “Someone posted ‘the hippies are going nuts again’ about our Wild Woods event,” Freeman says. “Someone described another of our events as ‘women with coloured hair finger-painting’. One person even said it was ‘a waste of lives’.

“We are taking people out of their comfort zone. We are stimulating the local economy, driving footfall to the city centre and creating jobs. We are utilising empty spaces indoors and outdoors for trial commercial use. Arts and culture modify people’s behaviour. People think twice about dropping litter because they can see something is going on. As a result of the stuff we are doing, people feel differently about their city.”

The latest project is The Brick Box Rooms, a residence in Ivygate, one of the city’s oldest streets. They have taken over a former butcher’s shop and are using the space for exhibitions, spoken-word nights, pop-up restaurants and live music. The residence includes the Old Crown, the pub next door, once home to lunchtime striptease shows and blue movie screenings, and the subject of one of the UK’s first prosecutions under the Indecent Displays Act. Freeman and Barrett hired a crane to hoist a vast golden boar on to the pub roof, a remnant from the Bradford Festival and part of the city’s folklore.

Their launch weekend last October featured light installations, artwork, projections, live music, dancing, DJs and an uncovering of the Bradford Beck (the river runs underground through the city centre). The rooms have since hosted an eclectic range of events, notably a visit by the Leaders Quest social enterprise which brought civic representatives from places as diverse as Detroit and Bethlehem.

Barrett and Freeman have taken a long-term lease on The Brick Box Rooms and an option to buy at a fixed price in three years. This was a deliberate step: if their distinctive form of cultural regeneration succeeds, they retain control of the building and a base from which to fight against London-like gentrification.

Barrett says: “We are not motivated by profit but we are realistic. There are a number of buildings in Bradford that people don’t think are worth much. We can add value through our endeavours – we employ local people and the money generated stays in the local economy. Our dream is for Bradford to be a city where everything is owned by local, small entrepreneurs.”

Cultural regeneration can be made more equitable in other ways too. Barrett says that public realm space should remain open to – and be used – by the public. Engaging with the private sector and working with the city council’s decision-making machinery is critical. “We want Bradford to be unique and some private sector businesses appreciate that. We will pay into the Business Improvement District (BID), so we have our hat in the ring and can have our say.”

Freeman is clear that things will be different in Bradford. “We are not tools of gentrification,” she says. “We want to help decrease inequality and give a voice to those who are marginalised. This is community-led property development. When property values go up, they will stay within the community, unlike what has happened in London.

“Artists and night-time economy people in places like Leeds and Manchester say it is becoming harder and harder to find affordable space because of development. People from London cannot believe what we have here. They are fascinated by what’s happening in Bradford.”

A different regeneration story in Bradford