Dance is back – live and direct

Birmingham International Dance Festival is a celebration of the return to outdoor arts. For Debbie Jardine and Raidene Carter, it is both a taste and a test for next year's Cultural Programme of the 2022 Commonwealth Games. 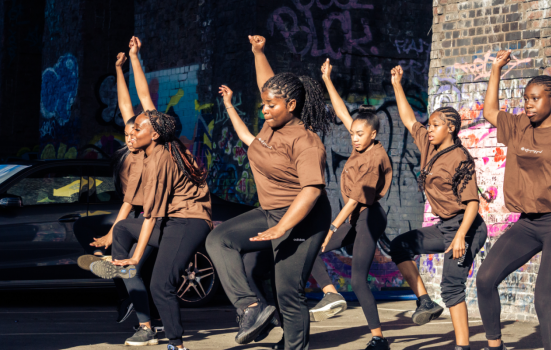 Birmingham International Dance Festival (BIDF) is back – live and direct! As the largest dance festival in the UK, BIDF presents the very best of international dance and inspiring choreography. It is Birmingham’s signature festival with its citizens firmly at its heart.Taking place in theatres, galleries and multiple outdoor places and spaces, the festival is poised to build on its success and realise the ambition for dance to move front and centre in the cultural life of the city and region.

BIDF promotes and celebrates Birmingham as a global dance city, connects people with great dance and creates a global dance platform for creative conversations. It’s a powerful cultural asset for the city, has an international reputation and is a significant player in the emerging national strategy to develop the market for UK dance.

So what’s new? We have no desire to ignore the seismic impacts of the last 18 months but to embrace them; the pandemic, the Black Lives Matter movement and our screen-based lives…. all profound, all complex, multifaceted and interwoven.

A two-part festival: live and digital

From adversity has sprung opportunity, new creative possibilities and partnerships. While we welcome in the live edition of BIDF ’21, it is very much a two-part festival. The opportunity that digital has created for dance engagement cannot be underestimated. Far from a pale imitation of live work, digital is a powerful new string to the dance sector’s bow.

The digital edition of the festival in June ‘21 attracted participants from over 70 countries – it would have taken years to build this international audience base through live work and physical attendance alone. In shaping the future of the city’s recovery we are unashamedly taking Birmingham to the world.

BIDF’s power to connect with the public is enhanced and driven by the Hippodrome campus partners and the ability to empower citizens to be commissioners and co-commissioners in meaningful, relevant, creative collaborations. This is the hallmark of the festival’s expansive new vision.

The live edition of the festival in ’21 continues the theme of engagement where you are, hence the array of new locations this year, further cementing the foundations and expanded footprint of the upcoming ’22 festival.

A place in the global festival calendar

BIDF ’22 heralds a new direction based on a set of principles shared by all partners, key amongst which is the shared commitment that Birmingham citizens will commission, co-create and perform inspiring large-scale dance. The ’22 festival will set the tone for future festivals and its growth.  The festival’s frequency, reach, scale, reputation and operational growth are all in the mix to enable BIDF to secure its place in the global festival calendar.

Achieving such an ambition isn’t coming from a standing start. Birmingham is an impressive city. Big, loud and proud works have a natural home here. It is a city which can do size, scale and volumes of high-quality content.

A testbed for an ambitious future

From March – June this year in partnership with Arts Connect and the Dance Development Leaders Group (DDLG), DanceXchange led a large-scale R&D project, Beyond Borders, which culminated in an original film commission that combined dance, animation and digital to tell a unique and bespoke story which was screened in the summer edition of BIDF ’21.

Investment from Arts Council England, Arts Connect and the Birmingham 2022 Commonwealth Games enabled the creative enquiry of 180 people (130 young people, 13 dance artists, 13 aspiring dance leaders and a team of creatives, support workers and specialists) into the natural environment that pushed the boundaries of what high quality inclusive experiences for young people could be; the amplification of young voices and the collaboration between dance and digital.

This vital project was the testbed for an ambitious fourteen-month, £1million programme, Critical Mass, funded by Spirit of 2012 and a ‘lightening bolt’ of participatory engagement that will cut through the Birmingham 2022 Festival. Critical Mass is bringing together 300 disabled and non-disabled young people from Birmingham’s diverse communities in a mass participation project to culminate in performances at the opening show of the Birmingham 2022 Festival, the Games’ Opening and Closing Ceremonies and Lives Sites. And, crucially for the partnership, participants will create their own show for BIDF in June ’22.

Much of the talent leading the project is from the region, home to the largest dance community in the country (outside of London). By embracing every possible kind of dance, for all types of bodies, it will foreground the conversation about what dance is and who can do it.

The Midlands too is an active participant in all of this - in an unprecedented cultural relay; from Coventry City of Culture, to the Birmingham 2022 Commonwealth Games and onto its cultural legacy, all nationally and internationally significant cultural interventions, all overlapping, all being hosted in the centre of the country.

It could be chaos, but instead, the quiet confidence of the Midlands has come into its own and is growing in volume.  For the foreseeable, as a cultural landscape, it’ll be the place to be and the space to watch.

Dance is back – live and direct