From crisis to creativity

Nottingham Refugee Week shows how opportunity can come out of a crisis when communities work together, writes Anna Ball. 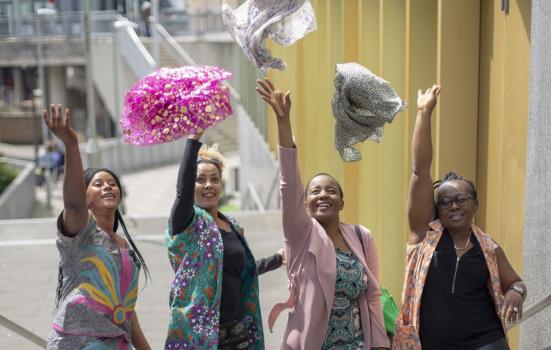 Women from Pamoja women's group at a poetry workshop
Photo:

The Chinese word for crisis, John F Kennedy once pointed out, is composed of two characters: one representing danger and the other opportunity. For a group of national organisations, the climate of gathering hostility towards refugees and asylum-seekers prompted them to launch the Refugee Week festival in 1998.

Despite the many dangers faced by refugees and asylum-seekers on their journeys to and even within the UK, the Refugee Week partnership (now managed by Counterpoints Arts) sensed an opportunity to promote the importance of sanctuary through community-led arts and cultural and educational dialogues.

As the number of displaced persons worldwide continues to grow, so too has the scope and reach of Refugee Week, with over 700 events taking place across the UK last year and an estimated audience of some 111,000 people.

Given the renewed anxieties around migration expressed by the Brexit vote, how can we account for its ever-increasing success as a cultural model? To find our answer, we should turn away from the global to the local, to a city that has truly embraced the opportunities presented by Refugee Week in its own unique style: Nottingham.

Like many regional branches of the festival, Nottingham Refugee Week operates at a city-wide level. It takes its general steer from national guidance delivered via an annual conference, but coordinates its events through a committee of local volunteers. But the freedom this model affords has enabled us to develop our own distinctive regional character and collaboratively-formed principles.

Central to these is the legacy of independent cultural activist organisations within the city. One notable organisation is Long Journey Home, a regional body involving more than 20 refugee community groups - the brainchild of cultural worker Stuart Brown. This work was continued by Nottingham Beyond Borders in 2009. Thanks to long-standing activists like Dave Hewitt, they produced a newspaper by and about local refugees and asylum-seekers for distribution during the festival week.

Over the years, the festival team has morphed in membership, responding not just to the changing shape of local refugee support (such as the establishment of the Nottingham and Nottinghamshire Refugee Forum), but also to the city’s own rapidly-expanding cultural scene. Today, it includes committee members drawn from refugee communities, support organisations, universities, cultural hubs and galleries.

What remains distinctive about Nottingham’s version of Refugee Week is its enduring commitment to nurturing capacity at all levels within the city: from internationally-visible organisations like Nottingham Playhouse, Theatre Royal and Royal Concert Hall, Nottingham Contemporary and the New Art Exchange to community groups such as the African Women’s Empowerment Forum.

In sharp contrast to the increasing social divisions that seem to characterise the Brexit landscape, these politics of collaboration have led to a greater sense of community connection than ever before. Organisations and individuals are finding new ways to share resources and forge new dialogues with one another.

We see heartening examples of this in some of the collaborations that have emerged over the past few years. In 2011, the Theatre Royal and Concert Hall in Nottingham (TRCH), usually a platform for world-renowned, high-profile touring shows, opened its doors to local organisation Streetwise Opera, an award-winning performing arts company for people who are or have been homeless. Rehearsals and performances at TRCH enabled Streetwise not just to vocalise its solidarity with Refugee Week, but to articulate the connections between destitution and homelessness that affect so many stateless people.

The New Art Exchange has shown commitment to commissioning exhibitions related to refugeeism, such as a 2017 show by Juan Delgado that explored the experiences of refugees crossing Europe. This year, City Arts will cement the festival’s ethos of hospitality by offering itself as a hub for those exploring Nottingham throughout the week, hosting exhibitions and workshops and serving free food and drink provided by the African Women’s Empowerment Forum.

Working on Nottingham Refugee Week has enabled individuals from the asylum-seeking and refugee community to develop their own talents and opportunities. This year, Committee Chair Salani Mutseyami won a place on the National Refugee Week leadership scheme. As Salani puts it, Nottingham Refugee Week provides not only a platform where refugees and asylum-seekers can “channel their fears and their hopes without any fear of intimidation” but also makes it possible to find “new meaning” and “emerge as leaders in our communities”.

Nottingham Refugee Week proves that opportunity can indeed arise from crisis. Dependent on goodwill and democratic working, the festival undoubtedly contributes more to the city than it costs in generosity of spirit. These are, after all, the principles on which the granting of sanctuary is based. It reminds us that however local our efforts are, they connect us firmly to something global.

Anna Ball is Senior Lecturer in English at Nottingham Trent University and part of the Nottingham Refugee Week team.
https://nottinghamrefugeeweek.org/

From crisis to creativity