Murals were used to divide communities during the Troubles, now art is helping to build peace in Northern Ireland, says Roisin McDonough. 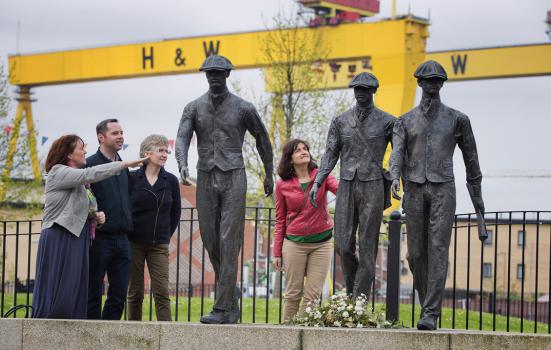 Ross Wilson’s The Yardmen, part of the re-imaging project in Belfast

Back in 2006, with the peace process in Northern Ireland barely a decade old, we at the Arts Council of Northern Ireland asked ourselves what more we could be doing to aid the process. Throughout the ‘Troubles’, community arts organisations had been active at the heart of our most socially and economically deprived and marginalised communities, acting as catalysts for positive change. They were then, and continue to be, influential in the process of transition. By 2006 the peace process had evolved to the point where the opportunity existed to take larger, more confident steps towards building a normal, inclusive and stable society. For us those next steps involved the introduction of a pioneering arts-led community regeneration programme called Re-imaging Communities.

The term ‘re-imaging’ is now a familiar part of the lexicon of neighbourhood renewal and the promotion of peace and reconciliation in Northern Ireland, which is a measure of its success. However, a decade ago, it was a dauntingly ambitious ask for communities – especially those harder-to-reach communities that we wanted to work with, which would have had little or no previous engagement with the arts – to put their trust in artists to effect real change in their neighbourhoods.

In the early days of the programme we concentrated more on the process than the end-product. The process involved engaging community groups, schools, churches and residents in artist-led consultations and workshops to ensure the full buy-in of the wider community. Together they would agree the themes of the work, based on creating a positive expression of their cultural identity that would make the neighbourhood visually more welcoming to everyone. The artist would then develop these themes into designs that would become the basis of the finished artwork. In Northern Ireland terms, the replacement of existing sectarian murals and territorial markings with works of art represented real progress in how the modern community wanted to present itself. This was a process fraught with difficulties, sensitivities and obstacles associated with the ongoing legacy of the Troubles.

One of the early turning points was the Greater Village Regeneration Trust’s ‘Streetscape’ project, which involved the replacement of a notorious, divisive paramilitary mural, known locally as ‘the Grim Reaper’, with a traditional ‘King William of Orange’ painting, reflecting the Orange culture of the community. This was, in relative terms, a major undertaking for this community. Where we once had a highly contentious mural, we now have a public space reclaimed by the community and a powerful statement about a community that is ready for change. Thanks to this achievement and the significant publicity it generated, confidence grew among other communities that they too could benefit from re-imaging. In the first phase of the programme, with our funding partners and an overall investment of £3.3m, we successfully delivered 61 projects, involving 9,000 people and more than 150 artists.

Three years ago, we relaunched the programme as ‘Building Peace through the Arts; Re-imaging Communities’, this time with £1.5m funding over three years from the European Union Peace III programme through SEUPB, the International Fund for Ireland and a cross-departmental, cross-border consortium including housing and rural networks. The emphasis this time was less on the major conurbations, which had seen the greatest concentration of resources, and more towards the interfaces and contested spaces in rural communities and the counties bordering the Republic of Ireland. The scope was broadened to respond to the changing demographic of Northern Ireland, now tackling racist as well as sectarian attitudes and concentrating on connecting the various communities. Also, since the re-imaging process was by now well established, we were able to realign our focus on the production of pieces of public art that would be as visually outstanding as they would be reflective of their communities, and which would provide a permanent source of civic pride.

Between 2012 and now, the revised re-imaging programme has delivered 32 pieces of high-quality public art, actively involving some 10,000 people and 120 community artists. In total, over the last decade that’s almost 20,000 people, nearly all new to the arts, who have embraced change and realised new possibilities and potential for their communities through the arts.

The programme has now run its course, at least for the time being. It has taught us all a great deal about finding new ways of unlocking the creative potential of our local communities and developing creative solutions to the issues and concerns of life experienced at a neighbourhood level. A comparison between the early tentative steps and the ambitiously creative works produced during the second phase of the programme is testament to how far we were able to come in the space of a few short years.

The arts have made a tangible difference to life in Northern Ireland, having successfully introduced a new dimension to the work of our partners in social and economic regeneration. For the thousands of people who rose to the challenge and embraced the re-imaging process, that wonderful piece of public art that is now the centrepiece of their community, embodying a desire for peace and reconciliation, is not the end of their journey. It is just the beginning.