The Agency has put young people at the centre of change in their communities. Roisin Feeny and Meghan Peterson share how it is developing their creative skills beyond the stage, gallery or museum. 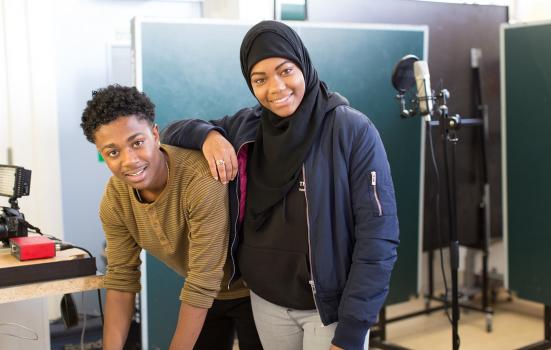 Entrepreneurs are creators who not only generate value for themselves and those they work with but also offer immense value to society. They create or identify opportunities to provide a product, service or experience, joining up resources and networks to turn ideas into reality.

The central part of an entrepreneurial mindset is creativity and innovation, and the two enhance each other. Creativity is necessary to develop business ideas, but also to make them happen. Innovative practice can bring together combinations of public and private resources to enhance social and cultural opportunities, and to meet specific societal needs in an environment of change.

Just because you are from an underserved area, it doesn’t mean you must work for someone else

It starts with young people's desires and encourages them to see themselves as having value that can be offered to the world around them, stimulating their mindset as entrepreneurs. Young people, especially those who have grown up in poverty, have a huge capacity for experimentation and innovation, and are familiar with making something from nothing. They feel passionate about their ideas for change, setting the stage for meaningful, long-lasting projects. Our 'agents' have created projects including bike maintenance service and training for ex-offenders; baking skills for food bank users; an engagement programme for young girls to get into elite sport; and a hydroponic growing scheme.

The Agency provokes a different way of thinking: just because you are from an underserved area, it doesn’t mean you must work for someone else; you can carve your own path.

Our arts-based approach enables entrepreneurial creativity by nurturing a flexible way of working, including developing the divergent thinking that our current education system struggles to teach. This enables young people to identify the resources already around them, including themselves, their peers and their communities, supporting them to activate their existing networks. This could involve repositioning their relationship with their school, local youth or sports club, depending on the needs of their idea. They also build new networks by researching other opportunities in the area and sector. Through this they learn to articulate their ideas with professionals. Through meeting successful freelancers, who deliver expert sessions in different areas, they learn about subtle ways of negotiating. Fundamentally, the young people learn by doing, and have direct experience of problem solving, being agile and being creative.

The arts sector has an abundance of experience with these skills. Artists are used to being self-motivated, producing their own work and building partnerships to realise their ideas, which is why cultural organisations are best placed to deliver such a distinct programme.

The university of life

Through the Agency, Kyle from Battersea in London developed The Glow Up, a workshop and events programme for secondary schools. It promotes positive body image for students with skin conditions to increase confidence and mental wellbeing, as well as natural skincare education.

Kyle reports that The Glow Up has positively impacted over 400 young people and is currently developing the methodology and adapting the program for its next phase. He knows how to work in an agile way, now juggling The Glow Up alongside his skincare brand FRANK’S REMEDIES and freelancing as a work coach for young people with disabilities in college.

The Agency views all young people who have gone through the process as a pool of skilled freelancers whose experience brings immense value to the sector. It has connected Kyle with City Hall, where he has been employed as a freelance event host. And he's worked in the same role at our own event at the Houses of Parliament.

Josh, from Moston in North Manchester, joined The Agency almost five years ago when he was 17. He’d just finished college and was looking at university options. Josh says: "The Agency invested in me and opened me up to the network of people and organisations that I work professionally with today. I never ended up going to university because The Agency was my university, it was the first and most important stepping stone to the career I have now.’

Since taking part in The Agency he has gone on to start his own video production company, Modify Productions, working regularly in the arts sector and beyond. Josh sits as a trustee on the board for Contact theatre in Manchester, and this year started as a facilitator and mentor for The Agency, working with the next generation of change makers.

Young people are encouraged to work with others who have been through the programme, to see each other as their first network and to capitalise on the wealth of expertise in their communities. They have created 127 freelance opportunities for others: young people have been employed as graphic designers, facilitators, performers, hosts, street team, videographers and photographers on each other’s projects.

Since launching in the UK in 2013, The Agency has been replicated across the country working in partnership with Arts Council England’s National Portfolio Organisations (NPOs), sports organisations, community centres, councils and local voluntary groups. The model has brought together communities from warring favelas; built connections in Belfast across community lines; and started to rebuild communities damaged by gang crime, far right groups and post-industrial decline.

The growth of The Agency is a call to action for the cultural sector in the UK and globally. Its success proves there is a need for creativity in action. Creativity beyond the stage, the gallery or the museum. Creativity applied to developing opportunities for young people and changing dynamics in communities and for wider societal change. We hope you’ll join us.

The Agency UK is a Battersea Arts Centre and Contact programme devised in partnership with People's Palace Projects. Current partners include: Kiln Theatre, Blackhorse Workshop, National Theatre Wales and Fablab, Belfast. Funded by the National Lottery Community Fund and the Mayor of London. London Borough of Culture is a Mayor of London initiative, supported by the City of London Corporation’s charity, City Bridge Trust and Airbnb.

The Agency is a programme originally conceived by Marcus Faustini in Rio de Janeiro where it is delivered by Agência de Redes para a Juventude. The UK pilot (2013-15) was funded by the Calouste Gulbenkian Foundation.

I feel so encouraged by your enterprise, my compliments for your imagination! Paradoxically, this is a feature so lacking in the public arts and their HE, my professional background.