Crashing through the barriers to classical music

Moving an orchestra into a school sparked a creative collaboration that can be replicated to benefit students elsewhere, write Anna Bennett and Adrian Bending. 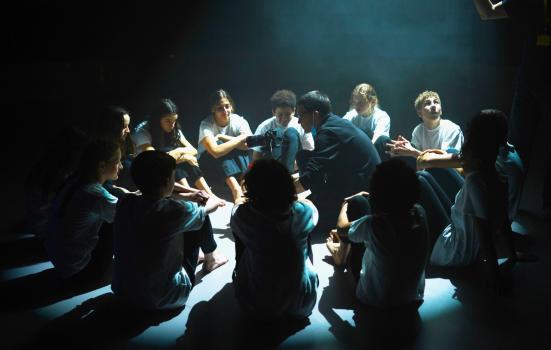 When the Orchestra of the Age of Enlightenment (OAE) was looking for a new place to call home, it thought outside the box, taking up permanent residency at a comprehensive school in London. The move was the first of its kind for a UK orchestra.

The orchestra’s office tenancy at Kings Place was coming to an end and OAE Chief Executive, Crispin Woodhead, felt strongly that it should look beyond a conventional solution. The OAE’s appeal for a new home landed on the desk of Acland Burghley School’s (ABS) Director of Operations, Kat Miller. Kat was working on expanding the school’s revenue and recognised the orchestra could rehearse in the school hall. The opportunity was perfect for the OAE and a contract was signed in September 2020. Despite the restrictions caused by the pandemic, the community at ABS welcomed the orchestra and together we started to plan new and creative ways to collaborate.

After taking up residence at the school, Crispin presented a new idea: he wanted us to do a dance project on the music of Jean-Philippe Rameau. We went along to our first Year 10 GCSE Dance lessons and kept our intros to a minimum. Then we looked on YouTube to see what some other groups have done with Rameau dance.

It was the easiest sell ever – the students were instantly engaged. We talked more about opera, music, and the historical background of the project we were about to embark upon. We tried a few dances and then the students voted, choosing Rameau’s ‘Danse des Savages’. Three weeks after moving into the school, we had a room full of students dancing to Rameau! The project grew to involve 18 musicians and, staying true to Rameau’s style, the choreography and music evolved with it. We settled on a final version for the GCSE assessments. Excitingly, a budget was then approved to record a film.

An adventure in creative thinking

Our production meeting was wonderfully dominated by the students. Now that we all knew each other, they felt empowered to disagree with us and take only the suggestions they found useful. Every voice was heard and every idea discussed before a few important parameters were established. The group found the project radical and stimulating – they have certainly shed any notion of being guinea pigs and set the bar very high.

Crispin says one of the crucial parts of our life in the school is creating opportunities for the students to work with us as genuine peers: “There is nothing more electrifying for a young person than to be taken seriously by ‘professionals’ and to be engaged in something unexpected.” These experiences might appear remote at first – even impossible – and a ‘can do’ experience where there are no barriers can be life changing. We don’t want to remove barriers to access; we want to crash right through them with the windows down and the music on full volume.

Of course, we want the students to engage with the music we play but that is just a small slice of the pie of opportunity in front of us. An orchestra can facilitate and drive activity across the campus and curriculum. We did not expect, for example, that we would become a fully-fledged media production company a year after becoming partners with ABS. That sphere of activity offers so much more to young people through the process of creative planning, design and technical delivery than just getting them to sing, play and listen – it’s about science, history, creative writing and business too. Above all, it is an adventure in creative thinking where the end point may be deliberately left open.

The sky is the limit

GCSE dance students were accompanied by the orchestra as they performed their self-choreographed ‘Danse des Sauvages’ routine. The collaboration was an important step in demonstrating how working together could enrich students’ appreciation of the arts and reinforce the positives of joining creative forces. It underpins the OAE’s mission to challenge traditions and explore great music with a fresh perspective.

While the Rameau dance project marks the first of many video collaborations, the orchestra was already familiar to many at ABS through interactive workshops for Year 7 to 9 students and existing relationships with Camden Music and 18 primary schools in the Camden area. The OAE has also worked on a new project for Year 9 and 10 students focussing on the role that friendships play in learning, the school community and personal development.

This vibrant and varied start to the residency, generously supported by the Linbury Trust, has allowed the OAE to work, live and play amongst the students of ABS. We believe challenging and creative projects such as the Rameau dance can be reproduced and benefit other students. Crispin perfectly sums up our attitude: “The sky really is the limit.”

Anna Bennett is Marketing and Press Officer and Adrian Bending is Principal Timpani of the Orchestra of the Age of Enlightenment.

Crashing through the barriers to classical music