Eleven Scottish visual arts organisations have banded together to improve opportunities for artists and show their worth to policymakers and the public. Shân Edwards shares the story of Scotland’s Workshops. 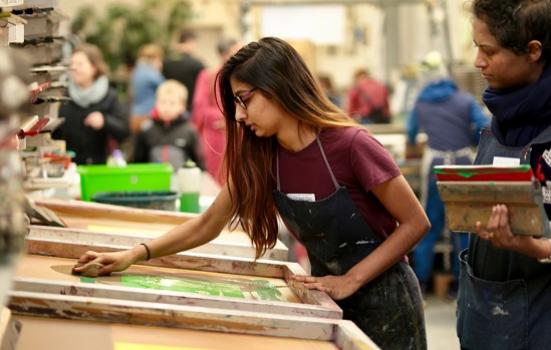 Now more than ever, in all facets of our lives, we need to come together and build community - and that is what Scotland’s leading organisations for arts and making are doing.

The specialist skills and facilities provided by the organisations that constitute the Scotland’s Workshops network support thousands of artists and members of the public every year to make their own work and create new projects. While all are very different organisations, the commonality that threads us together is our ambition to support people in the pursuit of making at all stages of their careers.

The launch of Scotland’s Workshops is the culmination of a process that began in 2017. A handful of the Directors in the network expressed a desire to explore how they could collaborate to secure production centres for future generations and share ideas and resources. Eleven organisations who provide a foundation for visual art production in Scotland joined forces: Scottish Sculpture Workshop, Edinburgh Sculpture Workshop, Glasgow Sculpture Studios, Highland Print Studio, Peacock Visual Arts, Dundee Contemporary Arts (DCA), Edinburgh Printmakers, Glasgow Print Studio, Street Level Photoworks, Stills, and North Lands Creative.

This winter we launched a shared website and in November, we hosted and produced the first ever nationwide Workshop Week. From open days to demonstrations, taster sessions and celebrations, the week helped put a spotlight on the world class facilities and support for arts and crafts based in Scotland. By creating a shared online resource, generating local and national media interest, and focusing on social media, we have built momentum.

Several of our organisations hold public shows year-round: 92 exhibitions were delivered by the group in 2017/18, reaching almost 150,000 people. The group attracted a further 16,570 people who accessed a programme of 286 events in the last year and engaged another 8,192 people through participatory programmes in the same period.

To group such a diverse set of organisations could have been tricky. We are all independent organisations with different approaches, but what we have in common is that we share key values of openness, collaboration and exceptional support. Each organisation’s contribution to Scotland’s international art success is borne out of their work with artists here and around the world over the past 50 years - so there is also a lot of experience to draw upon! The geographic reach of the network spans six local authorities in Scotland.

One of Scotland’s Workshops’ aims is to increase the profile for what we do and to encourage cross-pollination between the different groups of people we access. At my organisation, Edinburgh Printmakers, our new award winning building has brought a culture of making and creating to a part of the city that is currently undergoing a major period of regeneration. The Fountainbridge studio has experts on hand and a light and airy studio space in which to work. Our members volunteered to lead engagement activity at Workshops Week, speaking to members of the public about what it means to be involved with Edinburgh Printmakers. Both staff and volunteers showed visitors how to book onto tours and courses. The interest was phenomenal.

We believe - and have noted in our strategic plan - that we are “nurturing the making of art that happens right across the land”. The artists who use the Scotland’s Workshops network span a broad range of experience; from those at the very early stages of their career to established prize-winners of international standing. Technicians and teams in the facilities provide crucial support by teaching production processes, often informally providing additional hands-on education for many arts graduates. The learning experienced by children, young people and adults through evening classes, youth programmes and engagement with schools has an impact individually and within communities, particularly in the case of rural organisations like Scottish Sculpture Workshop, which is based in the village of Lumsden, Aberdeenshire.

Our ambition to work and learn together mirrors the collaboration that occurs in the workshops themselves: craftspeople in the early stages of their career can work alongside established artists, with the same experienced technicians to help grow their skills. The work made by artists in their glass kilns, dark rooms and casting workshops travels across the globe, earning Scotland its high profile for contemporary visual art internationally.

Another focus of ours is making a case to Creative Scotland and Scottish Government to support the infrastructure of contemporary art in Scotland - lobbying and advocacy were key motivators in bringing the network together.

The creative industries translate arts skills into financial wins for the economy in a range of ways – as a network we can bolster this further by providing employment training, innovative ways of thinking, support for local business development and selling UK creativity abroad. There are also opportunities available to save costs and increase income by working together as a network.

Across the network there are a huge range of partnerships with local authorities, academic institutions and arts organisations at home and abroad. To see the Scottish Parliament celebrate and commit to the future of Scotland’s Workshops with a special motion coinciding with Workshops Week was a reward for the efforts made behind the scenes to engage politicians and members of local government.

There is no other resource like ours in the UK. Scotland’s Workshops is unique, supporting hundreds of artists and members of the public to make work every day, every week, every year. Individually and collectively, we make a significant contribution to the country’s reputation as an international centre for artistic and creative excellence.