A commitment to young audiences

Theatre for young audiences has suffered from low status and under-investment, but perceptions of its quality are changing, says Nina Hajiyianni. 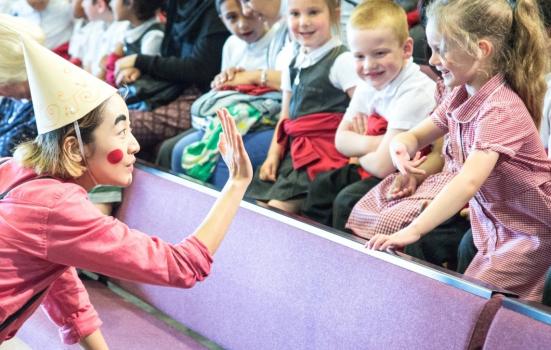 Theatre for Young Audiences (TYA) is not an artform so much as a description of work that is intended or accessible for people of a certain age. The quality varies (as it does across the whole of the arts world) and too often work for and with children, young people and families has not had the profile, status or investment that work for adults enjoys.

In spite of this, work made for young people has been among some of the most engaging and pioneering in terms of contemporary practice. The arts councils of the UK and Ireland have set out clear commitments to theatre for children and young people and most venues and companies have an educational wing or a commitment to family programming and see children and family audiences as a key to their business.

One event that changed perceptions of TYA was On The Edge, the World Festival of Theatre for Young Audiences that took place in Birmingham in July, with Birmingham Repertory Theatre operating as the producer and festival hub. The festival programme was curated by Purni Morell of the Unicorn Theatre, supported by a number of UK and Irish programmers and children’s theatre professionals.

The festival included work from Belgium, France and Denmark, countries that are seen as champions of work for children.
The resources and funding that many European companieshave historically received has made a real difference to them, as have the mechanisms which support extended R&D, devising and rehearsal periods. A three-week rehearsal process cannot lead to the same enquiry-led artistic discoveries that 12 weeks can. War House, probably one of the most successful children’s theatre exports in recent times, was clearly made with big but costly ambitions.

In comparison, work from the UK has – perhaps largely due to the strong legacy of the UK’s pioneering theatre in education (TIE) movement and our literary and playwriting tradition – often been perceived internationally as issue-based stories told in unimaginative ways.

The festival helped to challenge this assumption, showing that work from these islands as among the very best in the world - something that the Imaginate Festival in Scotland has helped promote in recent years. Some of the UK and Irish productions were shining examples of diversity and quality. Creative exchange and collaboration were central to the event, important factors given that the festival took place the week after the BREXIT vote.

Although artists making great work for young audiences do not always see themselves as TYA specialists, the festival confirmed that some work from the UK and Ireland is world class. Some have suggested that using the terms ‘sector’ or TYA is problematic because of a generic or reductive assumption around theatre for children. But these terms give us a sense of ownership of a community, which provides a network and possibilities for collective advocacy.

For the sake of diversity we need theatre-makers from a range of backgrounds and artistic disciplines to keep pushing and developing practice. If the position of children and young people were equal in all things, including cultural provision, then perhaps there would be less need to mobilise around a commitment to young audiences. The success of On The Edge will allow us to raise our game, focus on collective ambitions and be outward-facing and welcoming.

A commitment to young audiences