Changing the diversity of cultural leadership

Birmingham may be diverse but its cultural leaders are not. Lara Ratnaraja and Helga Henry discuss how the RE:Present programme is helping to change that. 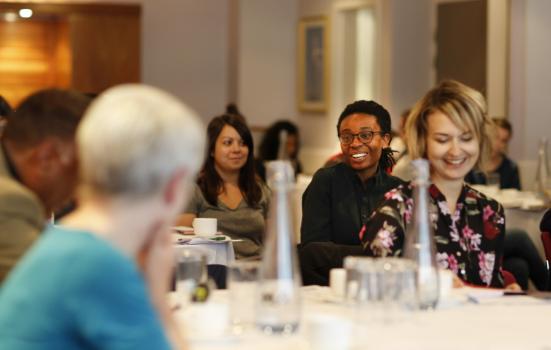 Just as the satirical comedy show Spitting Image is always credited as being based on an original lunch with Martin Lambie-Nairn, the RE:Present leadership programme could be credited as being conceived over a series of coffees we had with Val Birchall at Birmingham City Council (BCC).

A model for change

Following consultation with established and emerging female leaders in the city, wider reading and reports on diversity in the arts, as well as cuts in public spending, we developed a research-based paper and some proposals to start affecting change. We sought to model the partnership approach that we knew participants would need to grow their arts practice.

We felt it was important that the programme would be open to anyone who felt they matched one or more of the protected characteristics of diversity. What was evident is that Black and minority ethnic (BME) women in Birmingham were more prevalent at the emergent stage than at subsequent career levels, giving rise to a need for a programme that aimed to develop long-term, sustainable careers in the cultural sector.

The funding dictated that the programme ran within a more constrained timeline than we wished, but this in no way inhibited the experience of the programme for the participants.

Following an intensive recruitment phase we delivered the programme between February and September, including four-day leadership training. The cohort of 38 participants were predominantly female, but naturally represented other protected characteristics such as ethnicity, sexuality and disability across different artforms.

The programme featured not simply mentoring but brokered it, where participants explored their mentoring needs and were encouraged to be ambitious in their choice of mentor and to maximise the time spent with them.

Masterclasses harnessed the power and energy of inspiring speakers in social settings at Aston Business School where the cohort made new connections with academics, people from business and the wider arts community.

From the outset we tried to create an atmosphere of trust and confidence, encouraging participants to create a network of their own to continue beyond the programme. We wanted to have a programme that was the start of something and not a single intervention. Sustainability was in-built.

The impact of the programme continues to reveal itself. Participants use social media to share resources and opportunities, meet regularly and work with and for one another on a series of projects. From informal WhatsApp groups between former strangers who now have a virtual water cooler around which to pool ideas and resources, to potential artistic collaborations between participants who wish to make work around the same issues.

New collaborations, employment and initiatives unfold almost daily. And not just between the cohort. Our mentors (predominantly national leaders in their fields) have been impressed by the talent and commitment of their mentees. This has also opened up a host of opportunities for RE:Present-ers.

One RE:Present participant said: “The mentorship programme has been the best thing for me. I’ve sent emails, images and links to shows over the years without reply and just one email and I get a meet-up. That’s sometimes all you need – that connection and that relationship. He told me about a residency at the Open Eye Gallery that I didn’t know about. I applied and got it.”

Lessons learnt from this experience include giving recruitment the necessary time and resources to encourage applications. Many people lacked the confidence to identify as a leader, some did not feel diverse enough, and there was a common conflation of diversity with race. We would actively seek to communicate a wider understanding of diversity and make additional support available to applicants with disabilities.

We are currently bidding and fundraising to run the programme again. We have only scratched the surface of the available diverse talent in the city and region. Developing RE:Present is an opportunity both for the city itself and for Birmingham Hippodrome in its aim to be a cultural centre for everyone: inclusive and diverse.

Seeing the cohort develop in this way, and watching them support and grow in ambition and confidence, has been one of the most rewarding experiences of our professional lives.

Lara Ratnaraja is a culture consultant and Helga Henry is Director of Organisational Development at Birmingham Hippodrome.
E: helgahenry@birminghamhippodrome.com
T: 0121 689 1051/07730 762014

Changing the diversity of cultural leadership