A capable band of women

Astounded by the sexist remarks she received while touring a theatre production with an all-female crew, Sarah Brown tries to make sense of it. 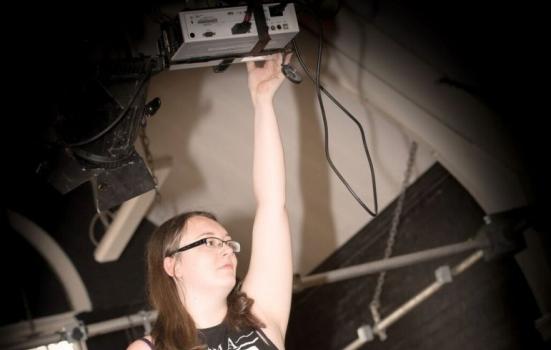 While recently touring ‘Becoming Hattie’ with Proteus Theatre Company, a one-woman show about comedy actor Hattie Jacques, I have been astounded by some of the sexist comments I receive.

The show’s main focus is about the challenges faced by plus-size women in the performing arts, and the show draws parallels between the career of Hattie Jacques and Jo, a fictional modern-day actress, who is struggling to break through the typecast of larger ladies only playing cleaners or maids, and never complex character roles.

It’s a show that deals with a range of feminist issues and raises questions, such as why can’t larger women have a career, marriage and success.

On the road there are three of us – the actor, the theatre assistant and me – and we are all women. In community venues we have a lot to do – the get-in and set-up of the costume, props, set and the technical equipment. Here are three examples of the comments we receive:

“When are the men getting here to move the set for you?”

“Do you girls do all of this yourselves? Isn’t it really heavy?”

“That’s a big van for a young lass like you to be driving.”

We brush them off with a smile or a joke, but what has amazed us most is that the comments have come from women who have seen the show, either in the audience or working for the venue.

So why these comments? Here are some thoughts.

Or maybe these women just believe that women can’t do these jobs, and they should be left to men. I’m going to leave that one where it belongs, in the corner. Hanging its head in shame.

You bloody beauty! Try telling the Sheffield Lasses they couldn't do ANYTHING during WWII. Let's make it normal then there will be no incredulous looks/comments. Keep it up girls. Lots of love. Jo West
In this day and age I find it odd that comments like these still abound. I run an arts centre in Penzance and we get a nice mixture of cast and crew on tour visiting us. I would say it's about 50/50 male to female. Most administrators seem to be female, in fact I can't recall another male administrator I correspond with on a regular basis. When I started out in the early eighties I remember a first LX who was a woman, which was unusual, especially as she used to wander around in bare feet! Now, thankfully, we seem to employ on merit. Which is why it seems odd to hear comments like those mention above.
Not so! I have been subject to these kind of comments quite recently, up to the fact that I lost out on work due to the fact that "I'm a girl" and "not up to the job"despite the fact that I've been doing "the job" for some years now. I work in a male dominated industry, and I that is my choice; I have been fighting these kind of comments since the eighties. But it's sad that even today, it is the general consensus that certain jobs are gender specific; my son's friends think that his mum's job as a lx/sound technician is "cool" but "weird".

A capable band of women