Creative subjects are essential to relieving the skills shortage in the UK job market, but they are being sidelined. Louise Jury explains how the Creative Industries Federation is making the case for arts education. 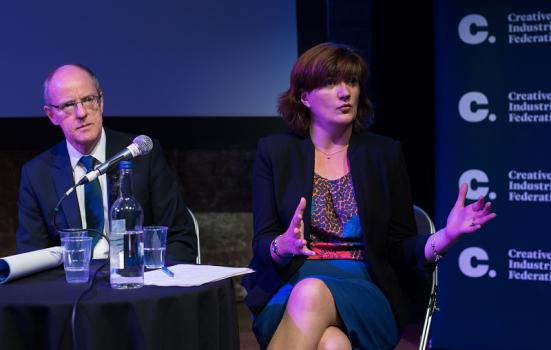 When you talk about why creative subjects matter, there are certain stories that hit a nerve. In one meeting held by the Creative Industries Federation with a member of the Government, it was the surgeon’s tale.

Professor of Surgical Education at Imperial College London, Roger Kneebone, who honed his surgical skills in the trouble spots of Africa, is a passionate advocate of an arts education because, in his own area of expertise, a decline in the development of hand and craft skills is believed to be affecting the capacities of surgeons. Hand-eye coordination, the ability to think in 3D – it’s all rather obvious when you think about it. The minister certainly saw the point.

When it comes to explaining why the arts are key to a well-rounded and fulfilling education and should not be silo-ed, there are a range of arguments to be mustered, and at the moment the Federation is mustering them all. We believe an arts education is a right, but our focus is on the threat to the talent pipeline.

It should be said, the Government disputes that creative subjects are being marginalised, despite a raft of evidence that the focus on the English Baccalaureate (EBacc) is contributing to a fall in numbers taking them. Take-up of design and technology at GCSE halved between 2003 and 2014. In one survey, more than a quarter of all schools reported that the EBacc meant some courses had been withdrawn or failed to recruit enough pupils for the year 2012/13. The Government claims a marginal uplift in the numbers taking at least one creative GCSE.

What cannot be denied is the skills shortage in the job market. The Government’s own ‘Tier 2 Shortage Occupation List’, outlining jobs it will allow migrants to be recruited to perform in recognition of severe skills shortages, includes many that require creative, as well as technical and STEM, skills. It includes graphic designers in visual effects and animation as well as programmers, software developers, dancers and musicians. There is also a demand for engineers with a similar mix of skills.

So the Federation, the membership body which unites the arts, creative industries and cultural education, is arguing across government – from number 10 to the DCMS, as well as the all-crucial Department for Education – that not only is the EBacc damaging the life chances of thousands of young people, but it is a potential threat to the future success and growth of a sector that is currently outgunning virtually all rivals. One that offers high-quality employment that is unlikely to be replaced by automation in future.

We are making the links between the needs of industry and what schools can do to educate children with the required skillsets – both for jobs currently suffering from skills shortages and those roles not yet created.

Being practical is paramount. We are planning work with the Gatsby Charitable Foundation, set up by David Sainsbury, examining what proper careers advice should look like. This is a major issue for the arts and creative industries, where many roles are not commonly understood and many careers are freelance or portfolio, rather than jobs as they have been traditionally defined.

We have partnered with Speakers for Schools, the charity set up by the TV journalist Robert Peston, which takes speakers into state schools to inform and inspire young people. This month John Kampfner, our Chief Executive, addressed the Bishop Challoner Girls’ School in east London as part of the charity’s new ‘Creativity, Arts and Culture’ series of talks.

Behind the scenes, we have been talking to a range of concerned MPs and peers, because we believe that having a broad coalition of voices in both Houses of Parliament is helpful in the debate. And we are making briefings and submissions. We have contributed to consultations on the green paper on higher education and on the EBacc, as well as the select committee’s investigation into the purpose and quality of education.

If schools can demonstrate a clear rationale for not using the EBacc, we have argued they should be permitted to adopt alternative assessment criteria without being penalised. We believe that Ofsted should not judge a school to be ‘outstanding’ without evidence of a quality cultural and creative offer in the curriculum.

This offer should be supported by extracurricular activities, but out-of-school arts activity is not a substitute for opportunities within schools’ working day. Both are required because creative subjects should not be an optional extra and it is unfair to put the onus on schools to deliver what should be clear Government policy, for business as well as educational reasons. Schools have enough on their plates without the Federation telling them what we do, but we will provide evidence to any that want to know more about that economic case and the employment potential of a creative education.

Education policy is currently the black hole in Government thinking but experience shows that attitudes can be changed. For years, senior politicians rarely spoke on the arts and creative industries even when their policies and spending were supportive. Yet Chancellor George Osborne now speaks regularly – most recently at the Federation’s first anniversary celebration last month – on the value of the arts and creative industries to society and to the economy.

The Federation was launched because our founder, the designer Sir John Sorrell, believed the sector was failing to pull its weight because it wasn’t speaking with one voice. Finally, we are beginning to do this, including for the many micro-businesses and SMEs that account for one in eleven jobs in the creative economy. The creative industries are firmly on the political grid.

A good creative education as the cornerstone of those thriving creative industries, the fastest growing sector of the UK economy since 2008, is an economic message that we believe is too strong for any government to ignore for long. We will continue to marshal the evidence and make that case.

Louise Jury is Director of Communications and Strategy for the Creative Industries Federation.
www.creativeindustriesfederation.com