Building a musical bridge across generations

Stuart Bruce reports on an intergenerational approach to strengthening community and wellbeing among people living with dementia and their carers, leading to benefits for older and younger people alike. 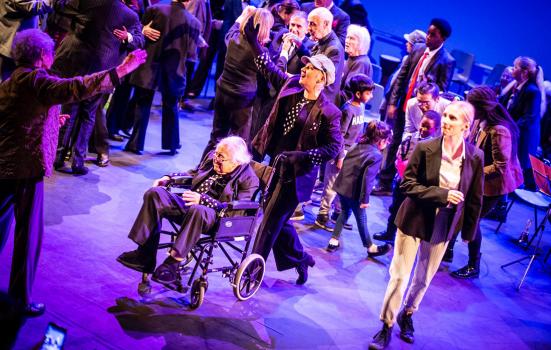 Initiated in 2009 by Orchestras Live and the Philharmonia, the Hear and Now project has for many years been giving people a voice and a safe space to explore their own creativity. By bringing people together to share their life experiences and aspirations, it has been supporting relationships among people living with dementia and their carers, and forging understanding, respect and collaboration between generations.

In the diverse community of the Queen’s Park area in Bedford, partners including Music 4 Memory and Fusion Youth Singing have been working with artistic leaders and players from the Philharmonia, creating their own music, lyrics and poetry and performing at venues including Bedford Town Hall and the Royal Festival Hall, London. Their exploration of memories, language and identity has been a rich source of the material, which has been moulded into songs, instrumental music and live experiences. To date, more than 700 people have taken part.

The social outcomes have been even more profound though. The project has shown that people living with dementia are not only capable of creating quality music, but can learn, can take risks, and can benefit profoundly by being part of a dynamic community where their contribution is valued.

For the young people, making music with much older people has given them insight into the lives of a generation they know little about, and had a positive effect on their perceptions, understanding and respect.

Researchers from the University of Bedfordshire have investigated the impact of this intergenerational approach on participants’ sense of community and wellbeing, as well as the influence of such work on professional artists.

They report significant and tangible wellbeing benefits from the project:

Participants of all ages report emotions, including happiness, inspiration, pride and excitement when taking part in project activity. Many also have a sense of pride in their own and others' involvement in the project and an overall sense of achievement and accomplishment.

Experiences of mutual support, good relationships and making new connections are described by all age groups and were vital to the positive responses, value and creativity of the project. Young people learnt from their interactions with older participants, while the older participants have learnt from, and derived enjoyment from engaging with younger people.

Examples of personal growth emerged at various project stages and all of the groups involved learnt new skills. This includes artform-specific skills such as learning a new dance, improving instrument-specific or improvisation technique, and for some was linked to a first-time experience of collaboration. The opportunity to learn and develop has built the confidence of many participants, who shed their inhibitions.

Empowering participants and giving them creative ownership over the project has led to an increased sense of purpose and engagement for all. Participants' experiences of the project have been valued at personal and professional levels, allowing participants to feel part of a greater whole. Partners and carers say the opportunity to participate alongside their loved ones makes them feel valued as people. One older participant powerfully commented: “If you’re communicating with other people, and connecting with them, it’s really part of carrying on living instead of deteriorating.”

Hear and Now has thrived for ten years because it has been a constant evolution. It has never stood still, not simply repeating a tried and tested formula because it worked in the past. Rather, it has been rooted in the unique contribution that disparate individuals can bring to a collective endeavour, becoming a true celebration of skills and talents, life experiences, energy and the joy and wonder that comes from creating music together.

This democratic and inclusive approach to creativity has the potential to bring about societal change that reaches far beyond the immediate community of participants.

Stuart Bruce is Senior Creative Producer for Orchestras Live, a national producer and music charity based in Leeds.

Orchestras Live works with a range of artistic partners, including the country’s leading professional orchestras, to ensure everyone can access world-class orchestral experiences; and with local partners including local authorities, music educations hubs, community groups and welfare providers. See the link for further details of the Hear and Now project and read the University of Bedfordshire report ‘Hear and Now: The Impact of an Intergenerational Arts and Health Project on Participant Wellbeing’

Building a musical bridge across generations