Behind the curtain: The thrill of starting your own festival

How did three young people who chose not to go to university end up running one of the most innovative cross-artform festivals in Cambridge? 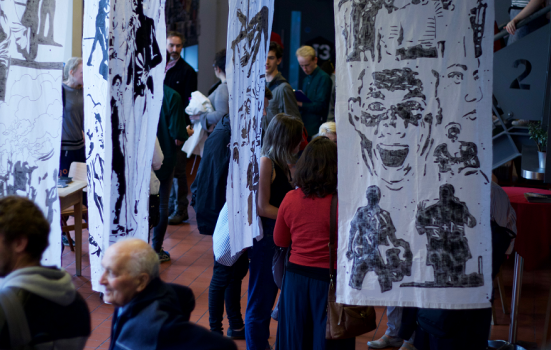 It was the same for all three of them. A pleasant day, a dusty room, a smiling careers advisor. And only two post-18 options: university or drama school. UCAS points or hellish auditions. £9,000 a year fees or £9,000 a year fees.

And yet, a few years later, the three men behind Fusion Theatre Festival – Finn Morrell, 22, Jack Bentinck, 21, and Eden Harbud, 20 – found themselves on a stage in the middle of Cambridge’s largest venue, flanked by a jazz band, addressing a crowd that had stayed for the whole 12 hours of their cross-artform festival. Not one of them had gone to uni. Not one had chosen drama school. But their Arts Council-funded, major arts centre-supported festival had been attended by over 350 people, had smashed their ticket targets, and had positioned the three of them as a healthy antidote to sweeping education reforms. Fusion had promoted young, local talent, cost less than the price of a normal theatre show, and been an all-round good time.

The question, as ever, was how?

2016 is not a great time to be starting a career in the arts. Changes to education policy are squeezing arts subjects out of schools: entries for GCSEs in arts subjects fell by 46,000 this year, drama is being integrated into English, music is becoming extra-curricular. Even if students make it to 18 with their passion for art intact – and decide that the limited choice between drama school and university makes sense for them – they emerge, fresh faced, into a working world characterised by unpaid internships, hidden hours and overwhelming financial risk. Creativity may be the export we’re most proud of in the UK, but we’re doing a pretty good job of choking the pipeline of talent. 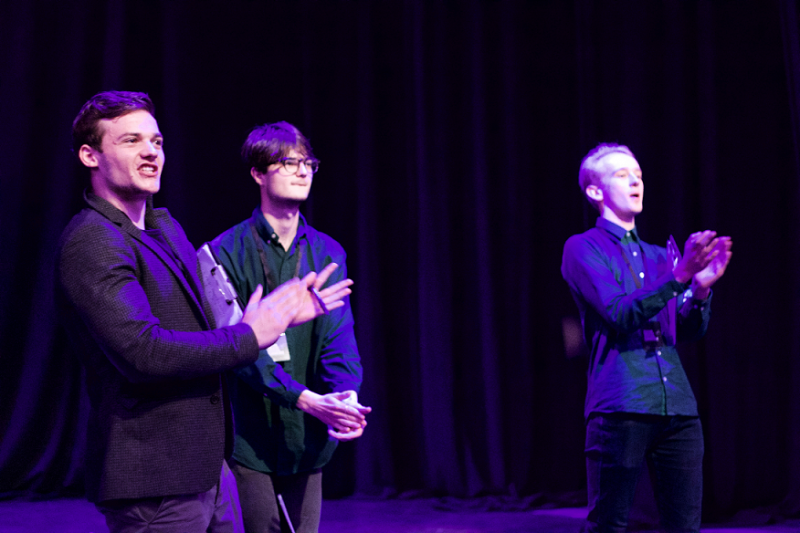 And that’s where Fusion comes in. Interning together at Hills Road – the largest sixth form college in the city, which has just cut its A Level in Performance Studies – Eden, Jack and Finn realised that they could use their experience running theatre workshops to give something back.

“The message trickling down from the EBacc and the Russell Group universities is that creative subjects lack academic rigour, which discourages students from taking them as an option,” Finn said. “And now the fourth option choice is gone at A level, which is usually their creative arts subject.

“Look, if you’re interested in the arts, you need to be involved in it. For us, Fusion was a way of saying: here’s a way where you can perform your own pieces, get together with a company, rehearse, make something, produce it, put it on.”

Eden agreed. “We want to keep students involved in the performing arts, and we decided creating a theatre festival was the best way.”

So that’s what they did. From being long-term participants in a local theatre company, The Craft Ensemble, they knew they had performers – the city and its schools are full of people looking for a stage – and in Hills Road, they knew they had a performance space. They couldn’t offer anyone payment, but they knew they could sell the idea: a cross-artform, cross-experience festival that would ensure young people had the opportunities to keep learning and developing, no matter how great or how limited the arts offering at their school. 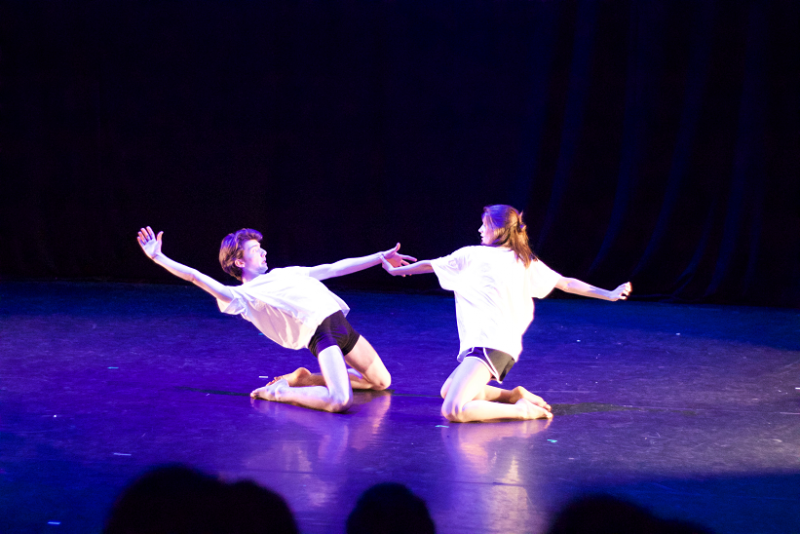 With a lot of graft, and a little bit of youthful exuberance, they brought a festival together. They crowd-sourced the budget, which Jack was in control of, using their design and promotional skills to raise £1,400. They entered into a partnership with the city’s biggest venue, The Junction, used advice from a mentor to target their advertising – rather than simply “slamming £20 on Facebook posts” – and then, suddenly, they were there. They had it all: the artists, guidance from the Junction’s executive team, and an established link between their sixth form college and a venue in the city.

“Maybe we could ‘do a Shia LaBoeuf’ and just do it”

When they laugh about rocking up at the city’s largest venue with a couple of printed placards and an idea, or about thinking, from their office the size of a table, that they could "do a Shia LaBoeuf and just do it”, you think, wow – what would it be like to have that sort of experience at 22? At 20? Finn described the three of them as “slightly naive”, but it doesn’t show. Their relationship is so good natured, so fun, they give off a sense that they can do anything.

2015’s festival was a resounding success. Almost the entire festival was run by young people, from the stewards to the supporters, and a programmer from the Junction was so impressed by some of the first-time performers that he gave them their own residency space.

Finn said there was no question about repeating Fusion: “Immediately afterwards, we were like, we’ve got to do this again.”

They wanted to do more for this year’s festival, so Fusion applied for funding from Arts Council England’s Grants for the Arts programme. They weren’t awarded a grant at first, but were successful after a bit of support from their relationship manager. 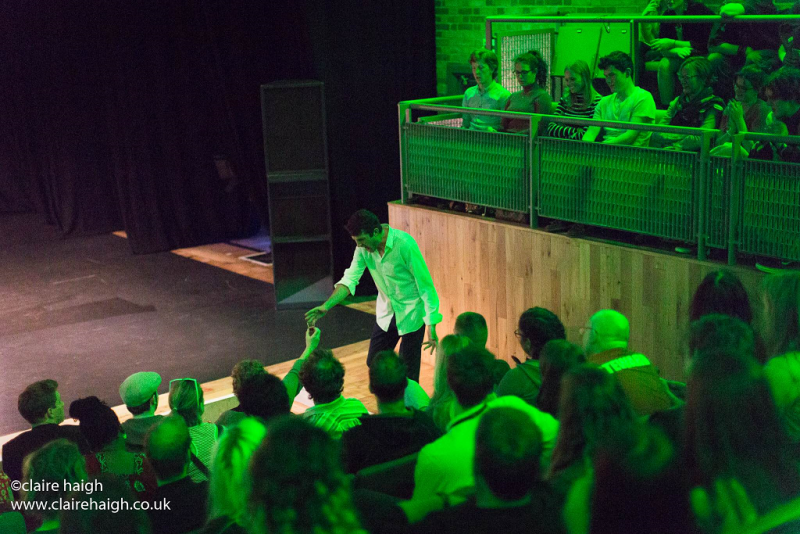 This time, they knew what they were doing. They were able to use the funding to pay almost everyone who participated in the festival, including artist Blythe Brett who created an installation piece in the foyer. “We got Police Cops, a Fringe smash hit,” Eden said. “We’ve been able to see what we like, as young people, and programme it as part of our festival and say to kids at school: ‘Take a look at these guys. This could be you.’”

Needless to say, this year’s festival went as smoothly as the first. The day progressed like a career – the school performances were on first, followed by university students, and finally the emerging and professional pieces. The audience travelled from venue to venue to see verbatim theatre, contemporary dance, six quick-fire acts, school performances, a one-man show about surviving cancer, workshops run by Complicite and the Honey Monster’s puppeteer, and the heroic tour de force that was Police Cops.

“When young people come to us on the day and say that they have just participated in an incredible workshop, or that they have never laughed that much watching a show, or that creating a piece for Fusion has been a great and inspiring experience, we know that it’s all been successful,” Jack said. “For us, that’s what the festival is about, and it was so brilliant to see this community of artists and young people dancing together at the end to some awesome music. That was a real highlight for us.” 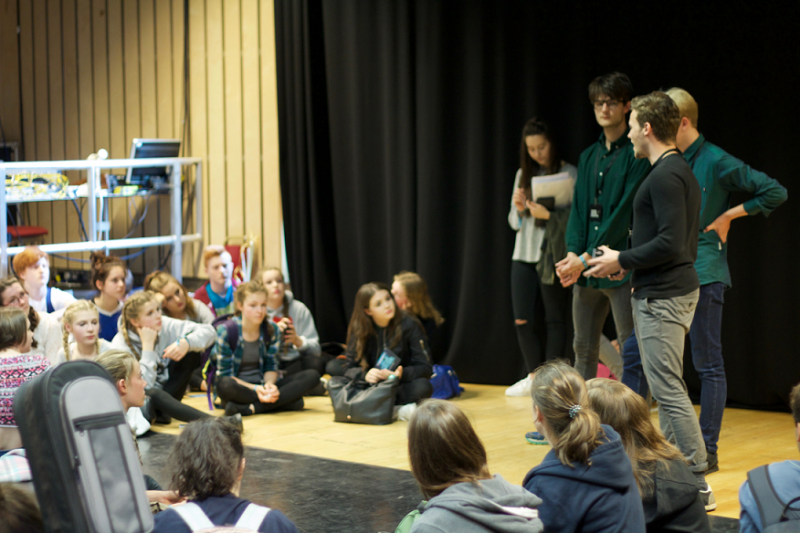 It’s impossible to look at what Finn, Jack and Eden have created in Fusion and not feel entirely drawn in by it. Their festival is of an incredibly high standard and they’re actively developing and nurturing young talent. There is a divide in quality between the professional and the school work, but that’s part of the deal – artists should have the time, space and support to be both incredible and not-yet incredible, and the experience of performing on the same stage as critically acclaimed work should not be restricted to the already polished.

But Fusion’s real power is how exciting it is for young creatives. For anyone who sits, lost and unguided, the vision of three successful and similarly-aged young people should serve as a reminder that it’s possible – and maybe not so difficult – to start something you believe in.

Cambridge is lucky to have Fusion Theatre Festival. It’s plugging an aspiration, opportunity and education gap that has been systematically widened by horribly misguided education policy, and it’s doing so with warmth, compassion and good humour.

At the end of the festival, after the main auditorium had transformed into a dancefloor and the three organisers had gathered on stage, a question was hurled out from the crowd.

“What have you learned today, Eden?”

“What have I learned today?” He paused, steadied himself on a turntable. “That togetherness beats all.”

Christy Romer is the Commissioning Editor of NewProfessionals.

The next Fusion Theatre Festival will take place in 2017.
fusiontheatrefestival.com
@fusioncambridge

Original photos by Callum Alvey Photography. Callum is a freelance photographer based in Cambridge.
www.instagram.com/callum.edward

Behind the curtain: The stubbornly beautiful craft of violin making