Arts and higher education: a successful partnership in action

Creating and sharing new knowledge - through teaching, learning, impact and public engagement - lies at the heart of relationships between universities and cultural organisations, Professor Katy Shaw and Claire Malcolm write. 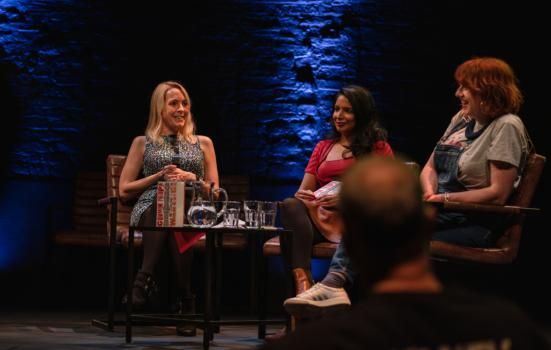 Northumbria University in Newcastle enjoys established partnerships with many cultural organisations including BALTIC Centre for Contemporary Art, New Writing North, Live Theatre, Tyne and Wear Archive and Museum and Tyneside Cinema. They are incredibly important to us.

Like any relationship, cultural partnerships need time, investment and a shared vision. Governance, reporting, and financial planning are just as important as strategy, creativity and pioneering projects. As a university, Northumbria seeks to achieve transformation through its strategic partnerships that grow its outlook, stature and global impact. Working with cultural partners is key to this.

The relationship between the leaders of partner organisations is one of the most important elements in partnerships and are the key to success. The partnership with New Writing North (NWN), which started in 2008, is testament to this.

The partnership makes a unique contribution to culture, creativity and new writing, as well as to teaching, research, impact and knowledge exchange both locally and nationally. It supports both NWN’s status as a leading writing development agency in England and Northumbria University’s mission to make a powerful contribution to cultural and economic development and to placemaking.

It’s a truly cross-disciplinary relationship, enabling activities with the Creative Writing department and many other university departments. To use university terms, the work spans Teaching and Learning, Research and Impact and Civic Engagement.

We co-deliver an industry module as part of the university’s Creative Writing Masters programme. We teach an undergraduate programme in Creative Writing and co-supervise student placements on the Cultural & Creative Industries Management MA. And Collaborative Doctoral students are hosted by NWN.

Our partnership aims to deliver creative skillsets and generate a talent pipeline of graduates to be trained and retained in the North. We offer a paid annual digital marketing internship for a Northumbria graduate and through the Northern Writers’ Awards, offer annual awards for Northumbria University students and alumni, providing career support and finance to develop work in progress into professional writing.

We have an established research and advocacy relationship and have co-produced research reports on challenges facing the contemporary British writing and publishing industries. The Value of Writing: The Impact of the Northern Writers’ Awards evaluated the long-term impact of the Northern Writers’ Awards on 250 writers over 10 years. It assessed the value for money of the project and its wider economic impact and allowed us to see how NWN could improve the scheme, and to understand its regional and national impact.

The research captured the status and importance of the awards to regional and national talent development. It also led to changes to the programme and our business planning and programme design, leading to performance improvements and added value to beneficiaries.

The report was presented to the All-Party Parliamentary Group on the Performing Arts in the Houses of Parliament as part of an inquiry into developing regional talent and enabling social mobility in the creative industries. It was also presented at the Northern Lights Conference produced by the Edinburgh International Book Festival.

The Common People project was launched in 2018. Initiated by New Writing North, Writing West Midlands, publisher Unbound and writer Kit de Waal, it aimed to identify new, unpublished working-class writers and to create opportunities for them to have their voices heard and their words published. It also provided professional writing and career development support.

The agencies worked collaboratively supported by Arts Council England and a crowdfunding campaign run by Unbound. The project comprised two distinct elements: an anthology, edited by Kit de Waal profiling the work of new and established authors; and an accompanying professional development programme to support the writers as they made their debut in the industry.

Together New Writing North and Northumbria University carried out detailed empirical research, interviewing writers to track the impact of the project. The findings and recommendations formed the basis of a 2020 report, Common People: Breaking the Class Ceiling in UK Publishing, detailing how the full diversity of voices in British society is neither heard nor acknowledged in UK publishing today.

The report was the first of its kind on this issue and carries much weight and value for those working professionally with writers. It was featured in all the publishing industry newsletters and bulletins, in the Guardian, the Observer and many trade and sector news sites. It was also shared by prominent writers, commentators and industry professionals and provoked much public debate.

Its recommendations initiated real action and developments within industry and several new businesses have been set up in response to the call for more literary agencies outside of London. These include: Laxfield Literary Associates, the Liverpool Literary Agency and the Sophie Bradshaw Literary Agency.

It has also been influential amongst industry bodies including the Royal Society of Literature and the Authors’ Licensing and Collecting Society. We continue to engage with the All-Party Parliamentary Group for Diversity in the Creative Industries to further frame the knowledge generated by the report. Northumbria University is now writing the inquiry for the All-Party Parliamentary Group into Northern Culture post-Covid.

NWN and Northumbria have a strong history of collaborating on PhD research projects with NWN hosting collaborative students on a variety of topics. For example, Caroline Murphy’s research on Practice, Pedagogy and Policy used NWN’s Well Versed programme to develop her understanding of how teachers’ experience of practicing creative writing influences pedagogy in schools.

At the Coalface used NWM’s touring work to libraries and community centres to examine cultural democracy and access to arts activity. And Common People was a critical study of the work of some of the writers in the Common People anthology referred to above.

We co-produce a number of public and civic engagement events such as Crime Story, a unique event that sees forensic, police and legal professionals working with a live audience to solve a fictional crime. This was commissioned from leading writers including Denise Mina, Paula Hawkins and Anne Cleeves.

Effective cultural partnerships are founded on people, places and pride in a region and an industry that generates a sense of energy and urgency in responding to challenges, seizing opportunities as they arise. They are mutually beneficial and as those partners grow and evolve, so the partnership adapts and grows too.

It's been quite an adventure over the last decade working together, and we look forward to making major announcements soon about how we are taking our partnership forward into the next exciting new phases.

Katy Shaw is Professor of Contemporary Writings and Director of Cultural Partnerships at Northumbria University.

Arts and higher education: a successful partnership in action