The combined effect of Covid and Brexit will make significant dents in the financial viability of the orchestral sector, in spite of Government support so far. Mark Pemberton considers the challenges ahead. 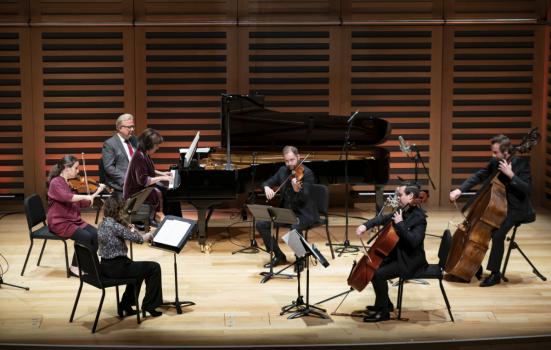 It’s just over a year since the Prime Minister’s unfortunate pronouncement that the public should “avoid pubs, clubs, theatres and other such social venues”. Chaos ensued as contractual obligations collided with cancellations, and it came almost as a relief when venues were formally closed.

Since then, the Association of British Orchestras (ABO) has worked closely with DCMS and was actively involved in the development of the Performing Arts guidance which was published last summer. That at least set parameters for how our members could get back to work behind closed doors, and in turn led, at least in England, to those glorious weeks in the Autumn when, firstly, our members could welcome audiences to outdoor performances, followed by indoor performances with socially distanced audiences. But as we veered into the second wave that was, unsurprisingly, snatched from us. And we have had to deal with the frustration of the doors being firmly shut to audiences in the other nations.

All hands on deck

What we can take comfort from is the resilience and enterprise of our members. It’s been a case of all hands on deck, and our members were quick out of the blocks to seize the opportunity to get back into the recording studio, develop online content, and put on concerts and performances when they were allowed. This sector, more than any other, has shown the most ingenuity in finding a way to keep reaching its audience.

We also recognise that the Government got the message about the impact on the cultural industries of a lengthy shutdown, and we are grateful both for the initial £1.5 billion made available through the Culture Recovery Fund, plus the additional £300 million announced in the Budget, along with other government support measures such as furloughing.

Meanwhile SEISS has helped freelance musicians, and it is good to see it finally being extended to new recipients. We remain concerned, however, that there are still so many musicians who have not had any financial support, with our research last year showing that 30% of orchestral musicians were ineligible. Many PAYE freelancers, for example peripatetic music teachers, have had nothing since last March.

But then came Brexit. We always knew work permits would be a problem, with immigration rules for third country nationals being the sovereign power of each EU nation. It’s been hard establishing precisely what each country’s rules are, and while we have been able to ascertain that some apply an exemption similar to the UK’s Permitted Paid Engagement, others do not, with Spain looking like a particular concern. We now need to work with colleagues in these countries to put pressure on their governments to apply an exemption for performers and crew.

At least we have been able to make progress on carnets, establishing that these will not be required by individual musicians carrying their instruments. But there will be extra customs paperwork and carnets for shipments of musical instruments, along with CITES certificates.

What did come as a complete surprise was the limits on road haulage. This blows out the entire touring model of moving instruments and other equipment to multiple venues across multiple borders, either in the orchestra’s own truck or by a UK-based operator. We do not as yet know how to fix this but are grateful that the Road Haulage Association has taken up the cause on our behalf.

What we do know is that the combined effect of these two shocks, Covid and Brexit, will make significant dents in the financial viability of the sector, in spite of the extra Government help received so far.

From conversation to action

It is no surprise then, that in line with our theme of ‘Aftershock’, these issues underpinned our latest annual conference, which took place online 10-12 March. With nearly 500 bookings, and over 300 people attending each session, we clearly put together a conference programme that hit the spot. Topics included the impact on touring, contracts and wellbeing, as well as comparisons with orchestras abroad. We also heard from the Culture Minister, Caroline Dinenage MP, and the Chair of Arts Council England, Sir Nicholas Serota.

But there was another shock to the system that informed the conference content. The death of George Floyd ignited calls for change on diversity and inclusion, once again putting classical music under the spotlight. From the opening summit in partnership with Help Musicians, which looked at tools for developing an anti-racist model, to sessions throughout the next two days, delegates learned lessons from colleagues in the USA on how to move from conversation to action in recruitment and programming.

Another thread that ran throughout the conference was the impact on musicians. As our chair Simon Webb said, when announcing that our annual ABO Award would this year go to ‘the musicians’: “While it has been a tough year for those of us who manage orchestras, it has been even tougher for those who make the music.

“Forced to down tools, go on furlough, rely on SEISS or cope with no income at all, they have had to show reserves of resilience and ingenuity to survive, accepting cancellations with good grace and showing flexibility when we have spotted a last-minute opportunity to get work in their diary. And what has been impressive is that so many have kept the music alive, from playing on their doorsteps to creating online resources for children."

Here’s hoping 2021 will see our members and their musicians get back to doing what they love, playing great music to audiences in concert halls.

Mark Pemberton is Director of the Association of British Orchestras

‘Aftershock’ – orchestras preparing for an uncertain future
Falling between the cracks
Is ACE too posh for pop? Music leaders have their say