Acting is an emotional assault

Wabriya King was told she had to be tough to be an actress. It’s not her who needed to change, she writes. 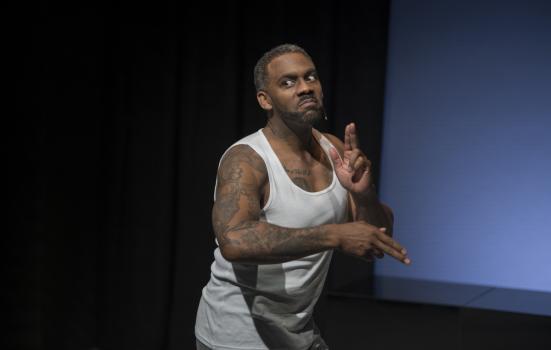 Ever come away from watching a piece of theatre or film and felt utterly moved? I imagine the chorus of a resounding yes! Whether it be rage, grief, loss, happiness or fear, we experience an emotional journey through the depiction of another’s story.

Metaphoric art forms enable us as the audience to indirectly experience possible thoughts and feelings of our own without the direct personal spotlight. But what about the actors who carry the emotional journeys of their characters night after night, take after take? Who honours and supports them? Theatre and film do not just trigger audiences, they also trigger those who tell these stories.

I graduated as an actress from The Oxford School of Drama in 2012. After several years working in various roles, I decided to take my career in a different direction and graduated from the University of Roehampton with an MA in Dramatherapy in 2019. During my training and career, I became increasingly aware of the therapeutic absence within the theatre and television industries. As actors our work can require us to delve deep into complex, ancient emotions to successfully honour a character’s journey. Often there is little support to process what emotional energy we might be using to repeatedly replicate the character’s state of mind.

My experience of being an actor is that you get the job done: rehearsals can be gruelling and repetitive, and it is simply expected that you will deliver the required scene multiple times. Should there be a fight scene, dance, movement or intimacy within a production, relevant coordinators are brought in to support that. When producing projects directly deal with traumatic topics such as enslavement, abuse, and addiction, where is the support for actors to navigate this journey?

It is my belief that when actors simulate and manifest the relevant emotional response to trauma that the body fundamentally does not know it’s fake. Apply this theory to themes such as rape, violence, and other kinds of brutality and essentially you get a group of people reliving trauma through the acting. Studies show that trauma is held within the body, usually unconsciously, and the response to this trauma exposure can manifest in several ways. This can include addictions, anger, guilt and fear, as well as feelings of hopelessness, hypervigilance, and moments of dissociation.

I have witnessed a number of these trauma exposure responses within the rehearsal space. My work aims to support performers (and others in the team) to develop healthy boundaries around differentiating themselves and their work – in other words, what’s theirs and what’s the character’s. I do this through grounding and de-roling exercises as well as awareness of the possible unconscious entanglement of self with the character or themes of the production. The themes as well as the characters of a piece can, for want of a better word, contaminate the dynamics between cast and crew in the rehearsal space.

Some poignant and necessary work has been produced in response to George Floyd’s killing and the Black Lives Matter movement. The trauma surrounding this was a focus of my work last year. When working alongside Typical, a play being filmed with Soho Theatre and currently streaming online, the obvious theme of racism and police brutality against Black people was the overwhelming sense of not being seen or heard – an isolating and exhausting experience that many Black people face daily. I worked with both performer and crew throughout the rehearsal and post-production. My work on this, and ultimately all productions, is to honour the emotional journey of the actor, to see and hear them as they express the emotional journey of their character. Using my own experience as an actress, I help give space to explore, process and reflect on the triggers in the work.

The therapeutic offer is not just verbal but physical. This is important because acting requires us to use our whole bodies to recreate emotion, meaning there is more opportunity for trauma to integrate. As a dramatherapist, I hold a neutral space where actors can off load and share in complete confidence. I am not, however, their therapist. Instead, I work as a guide to possible therapeutic work that might be tended to post-production with a personal therapist.

It is not just actors who can be triggered. Depending on the budget, I’ve also held a space for immediate crew to seek support. When working with Stratford East Theatre last year on 846 Live, I provided optional follow-up sessions for the performers, whereas with The Bush’s production of The High Table, I offered group sessions and one-to-one check-ins mid run. I tailor my sessions to the emotional themes and needs in the rehearsal space; like a choreographer, I am informed by the actors and the parameters of the piece. The directors I have worked with shared the relief of having someone to talk to about how the piece is affecting them. This takes pressure off producers and stage managers who can often find themselves working through this complexity during rehearsal.

I believe that every production has a responsibility to support its performers’ mental health and wellbeing. This is truly an area for improvement in the arts generally, in training and in work. My hope moving forward is that TV and film productions include a therapeutic budget, preferably for a trained therapist who understands the demands on performers. This needs to happen pre-production and consider the possible triggers for cast and crew. Similarly, I hope that every training body and theatre will have some form of resident therapeutic associate available for its students, performers and staff.

Mental health has for too long been an afterthought in the arts. We frequently witness famous actors exhibiting behaviours that could be attributed to mental health discomfort, and yet little consideration is given as to why. Drugs, alcohol, excessive partying are all thrown into the mix as probable causes – what if it’s simply the fallout of the emotional assault course that acting can be? It was often said to me that I would need to be tough to be an actress. What I want and am working towards now is an industry that is more supportive.

Wabriya King is a dramatherapist working with theatre productions and drama schools. Alongside this she works within the metal health sector and has a private practice.

Typical is available to stream at sohotheatreondemand.com.

Acting is an emotional assault