‘The past we inherit, the future we build’

In the first in a series profiling the shortlisted candidates for UK City of Culture 2025, Alison Clark introduces the county whose bid is inspired by the Durham Miners Association. 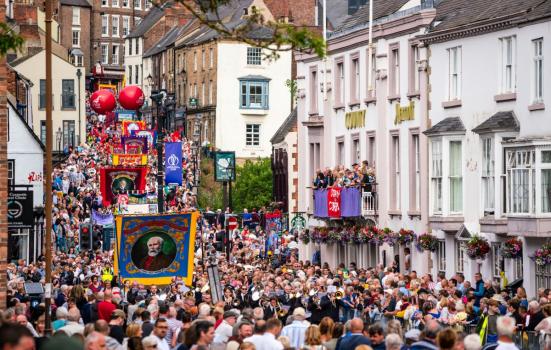 It was a pin-drop moment in one of the many Zoom calls early in the bid development process. As a large group of people attempted to nail the core of County Durham’s bid for the UK City of Culture title, Nick Malyan, chief executive of Redhills: Durham Miners Hall, spoke up:

“Our motto says it already: the past we inherit, the future we build.”

Nothing could be more apposite for a place whose cultural, economic and social potential can’t be navigated without recognising its deeply rooted and deeply-felt history.

That necessity to look to the future inspired, rather than constrained, by the past is a global challenge from South Wales to the American mid-west. It’s why Durham’s bid has a bigger story to tell.

More than a decade in development

Durham is intensely disparate: a world heritage site with a global university surrounded by post-industrial towns; memorials to long-gone collieries alongside intact castles; wild remote landscape near to brownfield sites.

It’s a place that demanded its own brand of religious royalty and invented working-class self-organisation; both a Harry Potter set and a Ken Loach film.

We had bid to become 2013 UK City of Culture, a title eventually won by Derry~Londonderry. Although we didn’t make the shortlist, the bid galvanised collaboration and ambition, initiating both Lumiere - now the UK’s leading light art festival - and Culture Durham, the collaborative cultural partnership who are core partner in the current bid.

These are the foundations of the 2025 bid, and why it’s both been twelve years in development and less than a year in production. The updated UK City of Culture guidance was published in May with a new expression of interest stage and an overt invitation to broaden the possible geography.

The stars were in alignment

At the time there was new leadership in both the local authority and the university, and an acceleration of the government’s levelling up agenda and devolution opportunities.

On top of that, there was Arts Council England’s (ACE) selection of priority places, a new BBC partnership for the North East and, perhaps most prosaic, the fact we were all living our working life on Zoom enabled instant sector collaboration without the logistics of travel across a large rural county.

The universe was pointing to a bid submission, but most of all the cultural potential of County Durham demanded it.

The bidding process is like turbo-charging a cultural strategy. It gets into places cultural strategies almost always struggle to. Developers and businesses want to be part of it, communities and artists are immediately interested, and it gives an instant public understanding of policy language like cultural regeneration and place-making.

I worked for ACE as both a regional and a national artform director during previous competitions and heard many times the idea that the process was a prize whether you won or not. I only fully understand that now. The process isn’t just about what can you do in the year of the title, or even the legacy planning, but the deep dive you take into your place and its ambition.

I know from my experience here in Durham that every one of the twenty bidding cities would have convened conversations, unearthed stories, crunched data, consulted with communities, asked artists to dream, shouted about success, acted collectively.

And if those places were anything like Durham there would have been nothing to stop any of that activity happening before – but nothing so uniquely focussed and aspirational to drive it either.

That deep dive gave us hard evidence of what we instinctively knew to be true; that the cultural, economic and well-being changes that Durham needs to fulfil its huge untapped potential can be achieved or catalysed through UK City of Culture 2025.

Levelling up is just another word for system change, and there is no lever like City of Culture to reset the system here. Our geography covers 2000sq km of city, countryside and coast - and culture connects it all.

From the ancient architecture of Durham Cathedral to Victor Pasmore’s Brutalist Apollo Pavilion, and from Lumiere light festival to the dark skies of the North Pennines, winning the title would connect our diverse cultural assets and landscapes and people like never before, creating a compelling international proposition that would stay with the place long after the designated year.

Over half a million people live here and there are multiple challenges. The average wage in Durham is lower than anywhere in the country, and there are more left behind neighbourhoods than any other place in England.

One of our key ambitions is to work with brilliant artists and creatives to explore and escalate one of the constant attributes of our people and our communities that we want to share with the world: to congregate and to gather.

It’s epitomised in the Big Meeting, the Durham Miners' Gala, when mining communities from across the region and the whole of the UK march through the mediaeval streets of the city in the world's greatest celebration of community, solidarity, and working-class culture. 2025 will be the year of truly global gathering for County Durham.

Our bid mentor is Bishop Auckland-born US presidential advisor Fiona Hill, whose memoir There Is Nothing For You Here describes economic alienation as leading to democratic decay – an extraordinary analysis through her own ‘improbable’ experience.

We talked about gathering, about culture and opportunity, education and internationalism and the interrelated parts they could play in the year and its legacy. She talked of how revived social connections support the community agency that can counter the populism and the democratic decline she sees increasingly in Russia, USA and UK.

So, our aim is to create glorious, spectacular art and experiences, re-energise a whole county, and perhaps even impact the future of democracy in the process.

There will definitely be something for you here.

Alison Clark is head of culture, sport and tourism at Durham County Council.

‘The past we inherit, the future we build’