Do artists hold the key for achieving COP26 goals?

We need to think about how to live in a broken world, and how to begin to mend it. Christopher Smith says the arts and humanities are crucial to this. 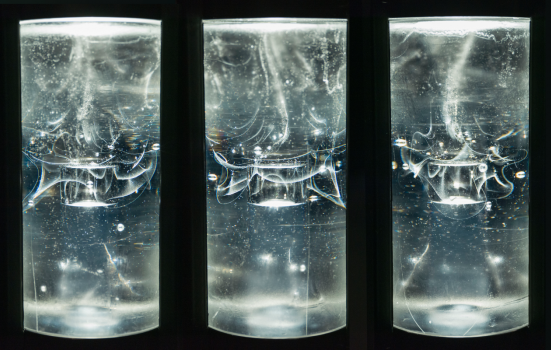 One of the most famous images of German romanticism is Caspar David Friedrich’s Wanderer above the Sea of Fog (1818). A man, his back to us, stares out over a mountainous landscape.  His thoughts are unknowable, the landscape sublime yet empty, nature at its most inscrutable.

This image reminds us of the unique ability of art to question the relationship between humanity and nature. And it is because of this ability that we must ensure the arts have a place at high level climate discussions such as the COP26 summit in Glasgow. Our task now is to adapt and mitigate.

Let me describe three ways in which the work of the arts is core to the most pressing challenge facing the globe.

Artistic and creative expressions of the devastating challenge of climate change have immediacy that neither graphs nor data can match. In the Worldlife Photographer of the Year competition, time and again we see the skill of the photographer in framing and selecting an angle or viewpoint to heighten the immediacy of the message. This year, Brent Stirton documented the work of Lwiro Primates, which rescues and rehabilitates primates orphaned by poaching. An image creates the immediacy and empathy that jolts us into action.

I remember hosting Wolfgang Buttress, the brilliant architect of the Hive, currently in Kew Gardens, at the time of COP25 in Milan.  Buttress presented a three-minute film of his soundscape of bees and light, and most of the audience was in tears, moved to the core by the deep music, the extraordinary complexity of their behaviour, the simplicity of the message.

Without the bees, there is no humanity. No words could do justice to that simple film, and that power changes behaviour. If we want innovation and adaptation to catch hold, we need the messages and mechanisms to be crafted by our finest designers and creators. And it is precisely for that reason that arts have rightfully been showcased at COP26 in Glasgow and will be essential to help us sustain thoughtful pressure on ourselves and our leaders.

The system, that harmonious whole, is broken, but we are still part of it. Art reflects us back at ourselves and reminds us of this. Last year, Adam Laity was presented with the award for Best Climate Emergency Film at a recent virtual ceremony held by the Arts and Humanities Research Council (AHRC) for A Short Film About Ice. It combined stunning visuals and aerial footage of Arctic landscapes with poetry and literary extracts from authors such as Lord Byron and Allen Ginsberg.

Touching on themes of cultural responsibility and eco-anxiety, the message of A Short Film About Ice is essentially that humans and nature are inter-connected in ways that are hard to understand, and that lack of understanding has caused the breakdown of our global climate system.

These are two poles of a crucial dialogue over the relationship of humanity and the natural world, which has been a critical theme for art.  We must insist on our position in this complex world – we cannot survive elsewhere.

Imagining a new relationship with nature

Right now at Tate Modern, Anicka Yi’s In Love with the World presents what she calls a natural history of machines – an imaginative presentation of what an evolution of the machine might look like.

Art gives us the imaginative capacity to rethink the world and our relationship to it. We will have to adapt, and we will have to change ourselves. Only by rethinking the very basis of what it is to be human, can we start to find solutions to the problems we have caused.  And that is the province of art.

Depicting nature, finding humanity in nature, imagining a new relationship to nature – just three ways in which the arts make us face the climate crisis urgently and drives us to the thoughts that precede the action we know we need to take.

At COP26, artist and AHRC-funded art researcher Wayne Binitie is displaying a piece of the Antarctic ice core which contains within it air captured from the pre-industrial era.

We now know that ice cores contain the traces of growing pollution. You can see the impact of the fuel burnt to support the Roman empire’s economy in the Greenland ice cores. As this piece of ice slowly melts, releasing air from a time before machines, we are forced to reflect on our history, the impact we have had on our world, and the shocks to the world’s system which we have inflicted. It is an example of the collective conversation that we can encourage when art takes centre stage at crucial moments for climate action.

The arts have rightly taken a central place at key climate summits, for art has always shown us to ourselves in unflinching mirrors, and that is as important for policy makers as it is for the rest of us. And we need to see far more of this, but not only as illustration   Rather it is precisely the role of the artist as a thinker and a radical that we need to see more of, not depicting other people’s debates but asking the questions we need to ask and answer, and sometimes are too keen to avoid.

Caspar David Friedrich portrayed a man alone before nature. Today all of us need to face up to what we have done to our planet, and what we now need to do.