Don’t leave your community out in the cold

What does it mean to have a civic role in challenging times? Andrew Barnett and Deborah Bull discuss. 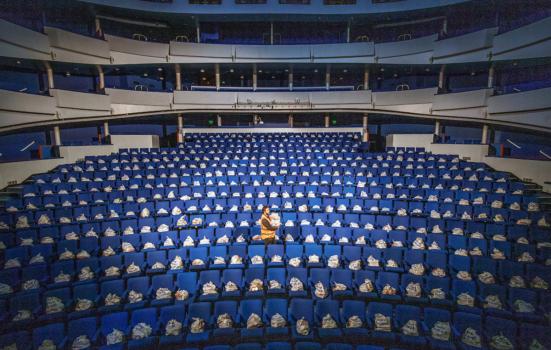 Eden Court's Empire Theatre as Humanitarian Aid Centre - one of the winners of the inaugural Award for Civic Arts Organisations
Photo:

Up and down the country, arts organisations have played a pivotal role in sustaining our communities, providing connection, joy, and hope. While the role of the arts in placemaking has long been acknowledged, the Calouste Gulbenkian Foundation’s Award for Civic Arts Organisations in partnership with King's College London highlights how organisations have uniquely modelled what it means to have a civic role in a time of great upheaval.

Deborah Bull: Andrew, where does the foundation’s focus on the civic role come from?

Andrew Barnett: The foundation’s work focusing on the civic role of arts organisations is the latest chapter in a 60-year story of support and thought leadership in the arts. It came from a sense that issues of diversity, cultural democracy and creative education were pitted against each other. We felt the prevailing access and participation agenda was limiting. An inquiry aimed to increase awareness of the civic role arts organisations play nationally and in their communities. At its heart lay an invitation to arts professionals to answer a simple question - what and who are you for? This is the key to being relevant and resilient in changing times. The award seeks to acknowledge what so many arts organisations have done in responding practically to those questions.

DB: Our organisations share a commitment to the civic role of institutions. Being a civic university is one of five core priorities within King’s College London’s organisation vision. We and the Calouste Gulbenkian Foundation also have shared history: King’s provided the initial literature review at the outset of the foundation’s inquiry. The invitation to partner on this award was not only a (re)meeting of shared values, it provided an exceptional opportunity for King’s students.

DB: Andrew, throughout this year’s award you reiterated the ambition of the civic role programme and how it contributes to placemaking in the wider context. Researchers have long pointed to the role of arts and cultural organisations in creative placemaking – helping to shape the physical and social character of a neighbourhood, town or city.

AB: Absolutely. Our civic role programme believes that publicly funded institutions must more clearly articulate the value they bring to their communities and wider society. This initiative and the award spark an important question: how can we support those in the vanguard and encourage others? It is the same sense of purpose that is the crux of human wellbeing. Organisations have this too – even more so in a period of uncertainty. It is important to realise that arts organisations have a vital role to play in sustaining individuals and communities and making places more creative, connected, and vibrant.

DB: How important was it that the award would Inform, inspire, connect and encourage collaboration?

AB: Our programme and the award seek to connect and inspire organisations that want to embrace the civic arts movement. We currently collaborate with 17 organisations on projects highlighting the significance of the civic role of the arts. Given the high quality of the 260 applications to the award and our inspiring winners, we’re hopeful of creating a learning platform and a movement of change-makers across the country.

DB: The award has underlined the contribution of arts and culture during the pandemic at a time when we’re marking the one-year anniversary of theatre doors closing in the UK. Much of the media focus is on exactly that – closed doors – when in fact many arts organisations have been anything but closed. They have doubled down on their efforts to serve their communities during this extraordinary year, holding fast to their values and missions but pivoting in how they deliver them. This award has shone a light on the impact of these efforts on communities, demonstrating the civic purpose of the arts in action.

At King’s, the potential for art and artists to inspire and enhance research and learning has long been recognised alongside the potential of academics and students to contribute ideas, analysis and research on issues facing the cultural sector. The award nicely connected the foundation, the academy and the broader arts sector, drawing on the skills of students from the Department of Culture, Media & Creative Industries at King's.

DB: How important was it that the award showcased best practice in terms of the civic role of art?

AB: All four awardees have demonstrated exceptional creativity and resilience in putting their communities first in these challenging times. Heart N Soul, an outstanding London-based charity, made weekly calls to 160 people to keep in touch and consult on their needs, co-creating an online programme of activities for those with learning disabilities. They also produced guides to staying safe in the pandemic and avoiding loneliness in lockdown. It has benefited the individuals it serves and will help the organisation re-think how it works in the future.

DB: I had the great privilege of chairing a committed and engaged panel of judges who brought real insight and experience to their work. Nevertheless, selecting awardees from the shortlist was not easy, as all the organisations demonstrated extraordinary resilience in the face of Covid-19. I was particularly inspired by the ways in which all four awardees amplified voices that are too often unheard, bringing their lived experience to the fore. And I was deeply impressed by the determination, inventiveness, and relentless hard work they had put in – and continue to put in – to ensure their communities were not left out in the cold.