A non-verbal approach to music-making for the very youngest children offers a comfortable environment for new parents experiencing anxiety, as well as a joyful time for babies, says Hannah Baker. 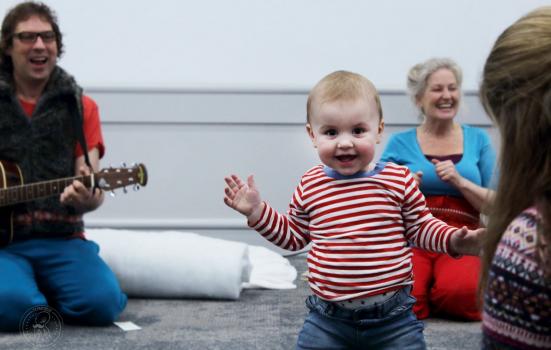 Babigloo Music for Babies (or Babigloo for short) is an approach to early years music-making for the very youngest children (under one year) and their mothers or carers. It is the brainchild of Jenny Gordon, a Dorset-based musician, who saw a need for quality musical provision to support new parents who were experiencing anxiety and low-level post-natal depression.

If the babies are calm and contented, this has a direct impact on the parent

The approach for the Babigloo sessions is non-verbal, using only music and sound to involve everyone in the space. It is influenced by the music learning theory approach developed by Edwin Gordon in the US, and Jenny Gordon, trained in the approach at the Sociedade Artistica Musical dos Pousos in Portugal.

The music learning theory focuses on the teaching of ‘audiation’, the term for hearing music in the mind with understanding. The primary objective is the development of tonal and rhythm audiation, and through this the participants draw a greater meaning from the music they hear, perform, improvise and compose. The approach also uses the sounds babies make in sessions to create vocal scales and rhythms. This enables musical conversations with babies as young as a few weeks old.

Babigloo uses classical music, both recorded and on live instruments, together with vocal scales, vocal sounds and rhythms as part of a nine-week course that finishes with a celebratory session.

Parents do not have to sing or play during sessions but are gently encouraged to do so, many finding their voices before the course ends. The music leaders will also pick up and move babies from person to person during the session, carefully pushing a rather British boundary of no touching among groups. One occupational therapy student observing a session remarked on the benefits to babies of being handled by a variety of adults, who naturally hold babies in different ways and so encourage muscle development for gross motor skills.

How can we gauge responses or indeed meaningful impact from such young participants?

During the first roll-out of Babigloo, it was striking to see how well the babies responded. Parents and children’s centre staff have made observations on the mood and responses of babies both during and after the sessions, and these often bring unexpected and valuable information. “Babigloo has helped my baby to just relax in general, it’s such an amazing break from everyday routine … It’s lovely to see him joining in, smiling and giggling so much, he’s a completely different child when we come home. He’s so busy enjoying the time he gets to spend with everyone at Babigloo.”

The benefits are two-fold as both babies and their parent or carer are linked to the delivery. They are mutually involved because the responses and feelings of parent and baby bounce off each other during and after the sessions. If the babies are calm and contented, this has a direct impact on the parent. Following the completion of the most recent nine weeks, all the adult participants scored themselves as having significantly improved mental health and wellbeing.

Babigloo found a natural partnership in children’s centres as they provide an ideal context to host and support sessions and can signpost it to families who would not otherwise access this type of activity. The programme has received significant support from Youth Music, whose funding for a year of activity, plus support from Poole Borough Council and crowdfunding donors, means the cost of attending sessions is completely subsidised.

One of the significant challenges Babigloo faces is sustainability. In the medium term, the Arts Development Company will continue business development support to broker new links for the Babigloo team, who offer training and programming for arts venues in the form of a ‘concert for babies’.