The circus comes to hospital 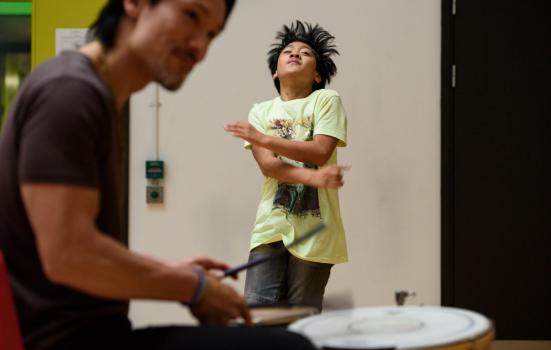 A Dance Umbrella workshop at Evelina Speech and Language Therapy Service as part of Breathe
Photo:

When new staff begin at Dance Umbrella they inevitably bring fresh ideas with them. Last year, after Molly Sanders joined us as Creative Learning Producer, we looked again at how we ask our artists to engage with the public beyond their festival shows.

I have learnt that the things that seem most unlikely, unfashionable or even ridiculous are often the ones most worth pursuing

A form sent out with contracts was sharpened and expanded to include questions on whether they do post-show talks, public workshops, relaxed performances and more. It also included an ‘Any other suggestions’ space. The artists’ responses helped us frame more accurately our offers to venues, audiences, and what we might call ‘trade’.

Some artists also took us in new directions. French choreographer Satchie Noro runs a circus school in Paris, and regularly teaches in a range of environments. She responded saying she was interested in working with non-professionals in health and medical settings.

Molly knew the pioneering work of Breathe Arts Health Research, who have been designing arts and health interventions for several years and deliver a performing arts programme across Guy’s and St Thomas’ NHS Foundation Trust. She contacted former colleague Hannah Dye there to discuss options. A series of conversations began that ultimately enabled Satchie to lead two weeks of workshops prior to her festival performances last October.

One workshop was with the Older Person Assessment Unit’s Strength and Balance Class, with participants in their seventies and eighties. The other was with the Evelina Speech and Language Therapy Service, where the children taking part were aged between eight and 18.

Both workshops took some time to arrange, and without doubt the expertise and connections of Breathe were crucial in helping us deal with the time-strapped health professionals who were keen to establish exactly what Satchie could offer their patients.

While there is considerable data and evidence already published on the benefit of dance in falls prevention work, when it comes to a connection between dance and speech therapy it is a little less obvious. However, I have learnt that the things that seem most unlikely, unfashionable or even ridiculous are often the ones most worth pursuing. So on we pushed.

Hannah Dye, Strategy Manager at Breathe, said: “Not only did the programme have a positive impact on the patients taking part but the skills development for staff was a particularly strong outcome. Satchie’s experience of working within challenging healthcare settings was clear and her ability to generously bring patients and staff into her process was incredibly valuable.”

What did the children get from it? Well their energy, collaborative explorations and shared focus was clear. But most importantly, their openness to finding new ways to communicate with their peers through dance and music also shone through. Their confidence as a group flourished during the week, and the amazement from one of the speech and language therapists when she observed a session was the perfect outcome for us: “Wow, you’re trying to get them to stop talking and it’s my job to do the total opposite!”

Both groups have invited Satchie to return with her musicians, and it was clear from the feedback that the music had contributed significantly to the special work and atmosphere she created. Feedback also showed that:

Alongside this, we have learnt three key things. First, to take our lead from the artists in what genuinely interests them as we devise the engagement programmes that are linked to the festival. This is not a startlingly new discovery, but I do think we are getting better at listening to what artists are already doing.

Secondly, I am reminded how great it is to work with creative learning producers who have enough optimistic determination to keep knocking on different doors until the right ones open. In this case it took travelling down a number of corridors and six months of conversations before the doors opened.

And finally, it is good to remember how important it is to work with those exceptional artists who see themselves firmly embedded in the world, and are aware of what power their life force and imaginations can bring to people. The connections with Breathe and the positive impact for the patients involved in both workshops could not have happened without Satchie’s exceptional artistry. No surprises there.

The circus comes to hospital