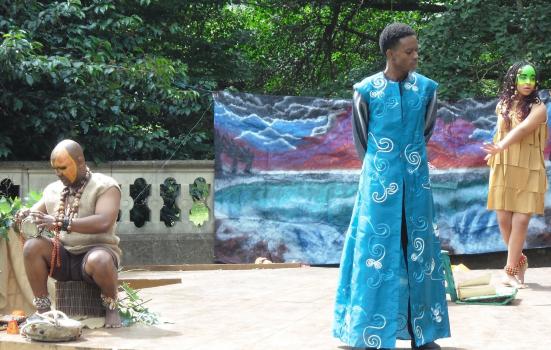 The Oratory Foundation's performance of The Tempest

The Dell is the Royal Shakespeare Company’s lesser-known but not lesser-loved stage. Playing exclusively in the summer, it’s a free open-air stage in Stratford that invites amateurs, community, student and semi-professional productions from across the country, and even abroad. It has a riverside setting, adjacent to the church where Shakespeare is buried.

Since it opened as part of the RSC’s Complete Works Festival in 2006, it has played host to a range of lively productions from over 250 amateur theatre companies, community groups, schools, universities and professional theatre companies. It has expanded from a fringe festival to a firm local favourite, attracting audiences of up to 600 people depending on the weather and the show.

The stage has been through several changes over the years, but our commitment to showcasing great takes on Shakespeare has remained the same. All shows are free and non-ticketed, and the relaxed atmosphere means families and people who may be new to Shakespeare can drop in.

We provide free picnic blankets, but it’s not uncommon for people to bring picnics and chairs of their own. We have even had some famous faces turn up in the audience. This year youth theatre company Gobstoppers was surprised by Labour leader Jeremy Corbyn who stopped by to see its performance of The Tempest.

The application process is deliberately simple because our aim is to showcase creative explorations of Shakespeare and his plays from all backgrounds. Applications open in the autumn, giving prospective performers three months to complete their application. It is done through our website, which is accessible year-round.

The applications are then narrowed down both logistically and thematically, to two different performances every weekend from June to August. These performances, mainly between 60 and 90 minutes long, are often seen by people who have little to no experience of Shakespeare themselves, so performances need to be engaging, well-thought-out, and instantly understandable. We choose productions that will stand out to passers-by who might never have seen a show at the RSC before, and that will draw them in to Shakespeare’s work.

The companies perform free of charge as part of our summer season of events. We provide the stage, support them with marketing, front-of-house staff, and even some help with props.

Performers from home and abroad

Both performers and audiences return time and time again. We have been thrilled to welcome repeat performances from the Oratory Foundation, a production company working in Trinidad and Tobago. It has performed several times, and will be performing its version of The Taming of the Shrew in August.

Last year, it performed The Tempest and commented: “We left our Caribbean island and ventured to The Dell in Stratford-upon-Avon with our interpretation of Shakespeare’s The Tempest. Youthful voices found expression and talent was unleashed. The RSC staff felt like part of our team. Coming across oceans from Trinidad and Tobago to perform at The Dell, we as pioneers profess the experience is wholesome and worthy. The charm of Caliban’s chant, the riot and revelry in his rant flowed seamless at The Dell. Our Caribbean voice found freedom on this stage.”

Another company from Oxfordshire BMH Productions has been with us since 2007 and has returned every single year since. “Working at the Dell has actually helped shape us as a company. We perform a Shakespeare show every year as part of the Oxford Shakespeare Festival and for the first few years we would do the full length show in Oxford and then struggle to cut the show down to an hour for the Dell. However, my colleague suggested turning our show in Oxford into the cut version and doing two on one night. Following this, we are now the one-hour Shakespeare specialists.”