Young high-flyers on the board

A Northern Ireland scheme that places young professionals on arts boards benefits the sector and the young people alike. Natalie Cooke reveals what she gained from the experience. 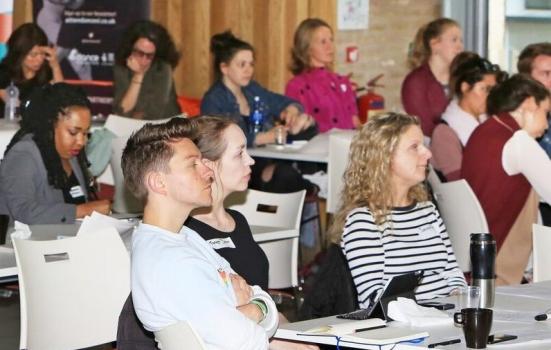 Every cohort of students has a high flyer. That organised student who is confident at speaking and is the first person to get an internship. I was lucky enough to chat with the high flyer from two years above me, and she recommended that I look at a scheme she’d just completed: The Young Professionals on Arts Boards with Arts and Business NI.

Her experience of the training and the board experience combined had helped her to add another string to her bow and develop higher management skills at a slightly earlier stage, which allowed her to stand out from her peers.

Like her, my background was in sales and marketing, so this sounded great. When I researched the scheme, I realised that it had been well put together and its alumni were full of the high flyers that every young graduate aspires to be. It had a rigorous application process and then three intensive training sessions before you were even considered for placement with a board.

Once on the scheme, the training was my first introduction to the higher management skills that had been alluded to. I thought it would be typical skills like communication and teamwork, but instead it had jumped up to influencing, persuading and convincing. We were talked through difficult scenarios and how to deal with sensitive issues. It was quickly clear that while this would be useful for a member of a board, if applied correctly it could permeate any aspect of my career.

I was lucky enough to be placed with TheatreNI, an organisation that represents, supports, trains and creates opportunities for the performing arts in Northern Ireland. It is diverse and indiscriminate in its membership, so no two meetings were the same. My arts background is an interest in musical theatre, but TheatreNI’s work goes beyond that into the areas of drama, physical theatre, dance, circus, street theatre and opera. Immediately I was able to broaden my horizons.

Serving on a board is fast-paced and ever-changing, which makes it a really enjoyable experience. It’s a case of ‘you get out as much as you put in’ because you can choose exactly how involved you’ll be. As a young person at the start of my career, it offered me opportunities that I would typically have had to wait another two years to achieve in my normal career.

The best example of this was that I was able to sit on an HR panel and hire a new member of staff. I was open about the fact that I’d never done this before, so the Chair and the Executive Director took me through the process and answered any queries I had. This meant that when the same situation came up in my own career, I knew what was going on. That was valuable because I wasn’t given the same opportunity to ask questions.

Being on a board of a charity that represents members is a great way of being able to see the bigger picture and the common issues that all members are facing. Seeing how the arts sector, much of which is made up of small and medium enterprises, charities, community and other types of organisations, was starting to get ready for the new data protection regulation is a huge part of why I’m now studying for an MA in Law. Seeing how our diverse members got ready for this common piece of legislation was something I would never have been able to see in such detail without my board membership.

I had the opportunity to make suggestions on how the industry might respond to ongoing problems. A chronic shortage of core funding was one thing, but also instances of sexual harassment within the wider entertainment industry. To be on a board with industry leaders and see how they approach problems and think of solutions in these sensitive instances is something very valuable that I hope I will get the chance to use later in my career.

Having been on a board with entrepreneurs definitely influenced me to take a leap of faith into the next stage of my career, and it’s given me confidence, particularly when approaching difficult issues. I’m quite sure that I’ve benefitted the most out of this opportunity, but I hope that I have been able to bring my marketing skillset and creativity to TheatreNI.

Schemes like these are beneficial to all involved – there are no losers whatsoever – and they should be encouraged and expanded. The arts thrive on diversity, and so diversity on a board is a logical step. This scheme is a simple, inexpensive way of allowing everyone to benefit.

Natalie Cooke was a trustee at TheatreNI as part of the Young Professionals on Arts Boards scheme run by Arts and Business NI.
www.artsandbusinessni.org.uk

Young high-flyers on the board