It’s not enough for urban arts companies to tour to rural areas - we need to support more rurally based organisations, argues Ralph Lister. 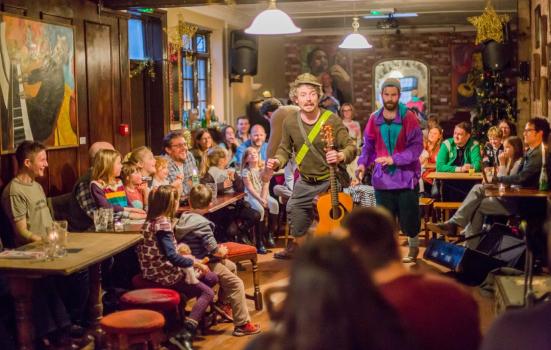 Fine Chisel in 'Neither There Nor Here'
Photo:

I have long believed in the need to document and record rural touring activity to give it more visibility, credibility and profile. So, in 2003 I was delighted with the report Only Connect, which surveyed rural touring audiences nationally, finding that 30% of rural audiences only accessed the arts through a rural touring experience in their local village hall.

While many urban-based organisations work in rural areas, the arts ecology is healthier when arts organisations are located within their host areas

On behalf of the National Rural Touring Forum (NRTF), I advised on the first Arts Council England (ACE) Rural evidence and data review in 2015.

In the ‘smaller area’ classification (DEFRA’s methodology) 30 – or 4.6% – of ACE’s national portfolio organisations (NPOs) are based in rural areas, representing 2.5% of overall NPO financial investment between 2015 and 2018. This is very low in comparison with the rural population as a whole, which is 17.6% in this classification. (Aldeburgh Music in Suffolk is included in these figures and receives around £4.2 million of the £25 million invested in rural NPOs.)

While many urban-based organisations work in rural areas, the arts ecology is healthier when arts organisations are located within their host areas, along with levels of direct investment in those areas. We would welcome positive action by ACE to strengthen the local arts infrastructure in rural areas by investing more funds into proven organisations, by increasing levels of funding going to existing NPOs and funding organisations that are not currently NPOs.

18% of NPOs are located in the ‘higher area’ rural classification and receive 10.2% of total NPO financial investment, while the rural population represents 23.4% of the whole. (As with Aldeburgh Music, the RSC sits in this group and receives around £45 million out of the total investment of £100 million.)

Focus on the regions

The balance of NPO investment in rural and urban areas has not altered significantly between the current portfolio 2015-18 and the previous round 2012-15. In the light of the debate around ACE funding inside and outside London, it feels like there was a missed opportunity for ACE to address a wider funding imbalance between urban and rural areas through its NPO portfolio decisions.

In the review’s overall conclusions, the authors wrote: “Historical legacies of arts and cultural funding being concentrated in major urban conurbations such as London also has an impact on the distribution of funding.” In its conclusion to its inquiry into ACE, the House of Commons Culture, Media and Sport select committee wrote: “The Arts Council is well placed to tackle the clear imbalance of funding that favours London unfairly. It must do so with greater urgency if it is to realise its declared ambition to engineer the provision of great arts culture for everyone.”

With the most recent NPO decisions for the period 2018 to 2022, much was made of a funding shift from London to the regions. According to the Rural Narrative paper, 18% of the total had been based in a local authority area defined as rural and these organisations would receive £44.6 million in 2017/18. But 18% is the same figure as it was in the previous round 2015 to 2018, relating to the higher-level classification. So, there’s been no shift of funding to those rurally based organisations at all.

ACE plans to update the Rural Evidence and Data Review this year and it will inform its pending consultation process, which will result in the ten-year strategy 2020 to 2030. Last year it commissioned NRTF to undertake a significant three-year research project into the individual and community benefits of rural touring.

There have been exchanges with ACE about urban-based organisations doing good work in rural areas to which our response is that organisations, such as Aldeburgh Music, hoover up large chunks of the quoted rural investment. These exchanges ultimately do not address the unequivocal need for rural-based arts organisations to serve and work alongside their rural communities.

Having worked in the Arts sector for both Aldeburgh Music and now for the (unfunded) Cedars Hall in Wells, I completely agree with Ralph that the funding priority in rural areas is to increase skills and capacity in existing local organisations (including volutary and amateur ones) rather than parachuting in work by national urban-based NPOs. Our work researching local appetite for Wells's City of Culture 2021 bid last year demonstated just how much cultural activity is already going on at grassroots level in Somerset. What it needs is just a little professionalised co-ordination of administration, marketing and technical resources. We'd like to see an accessible cultural "toolkit" for semi-rural cultural partnerships rolled out across the county to replicate what Take Art is already doing in South Petherton. Even Somerset County Council might then be tempted back into involvement with the arts.
Rural organisations are strongly linked with their communities, often delivering work only through the support of numerous volunteers. Limited access to arts is a serious disadvantage in terms of development of the whole person and social isolation and loneliness in rural areas if significantly combated by arts engagement but costs make provision patchy. Small good rural arts organisations don't have the capacity to apply for and maintain NPO status - so even if there were more NPOs based in rural areas, valuable arts organisations would still be outside the system. Coupled with the very high per capita cost of delivering arts in rural areas, rurality is always going to be a disadvantage unless strategies are rural proofed. Genuine consultation with rural organisations could significantly improve the quality and access of provision.