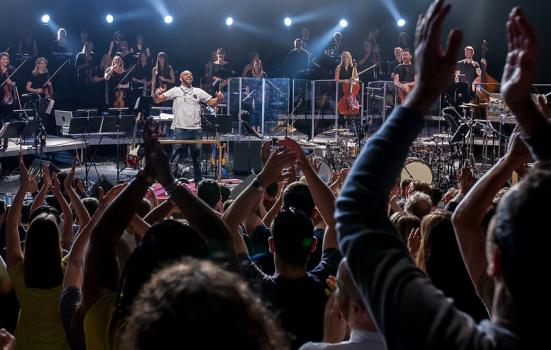 Arts Council England (ACE) has increased the number of National Portfolio Organisations (NPOs) it funds by 183, and increased funding across its portfolio by £42.5m a year, in what it has billed as the “largest ever investment” in its national portfolio.

The NPO investment for 2018-22 also sees a combined cut to the four highest-funded NPOs of around £2.5m a year, and the readmission of the troubled English National Opera (ENO) into the portfolio on standstill funding.

Announcing the 831 organisations that will receive NPO funding over the next four years at Leicester’s Curve theatre on Tuesday, ACE billed the new portfolio as an effort in rebalancing, with money moving from the largest organisations to the smallest and an “additional” £170m for the arts outside London between 2018 and 2022.

Talking about the funding, Sir Nicholas Serota, ACE’s Chair, said: “Alongside continuing support for our great national companies, we’ve funded inventive, pioneering arts organisations and a new range of museums across the country.

“We’ve also included libraries producing high-quality cultural programmes. Working together these organisations will inspire a broader range of young people and audiences across England than ever before.”

The annual £409m funding for the national portfolio will consist of £338m in Grant-in-Aid funding from Government, and £71m from the National Lottery, with significantly more NPOs receiving their annual funding from Lottery.

From 2018-22 there will also be £212.5m per annum for open access funding stream Grants for Arts and Culture and the strategic funding streams, which address gaps in the sector, such as “enhancing diversity”.

Overall the balance of national portfolio funding between London and the rest of England has shifted to 40:60. It was 47:53 in the 2015-18 round.

Portfolio funding to London will remain at a standstill, and ACE said it will focus on “creating the conditions” for cultural clusters of excellence to grow in areas where investment has historically been lower.

Cuts at the top

The four highest-funded NPOs – The Royal Opera House, Southbank Centre, Royal National Theatre and the Royal Shakespeare Company – have all taken an average 3% cut, which works out at around £2.5m a year. ACE said the move would allow it to “focus on bringing in smaller, more diverse organisations into the portfolio”.

A spokesperson added: “We recognise that reductions are challenging for any organisation but we think that this group, producing excellent work, has the capacity and the resilience to manage [the cuts] in a way that will contribute to the long-term health of the overall sector and will provide the best return on public investment.

“Organisations that receive the most funding will be required to do more to support the rest of the sector, particularly smaller organisations and individual artists.”

While the majority of organisations in the portfolio (59.8%) receive standstill funding, 98 organisations (8.4%) have received a funding uplift. ACE said these were reserved for those in “exceptional circumstances” that showed “particular promise”.

Big winners include the Attenborough Arts Centre in Leicester, which receives a 312% increase in funding to £207k per annum, and Theatre in the Mill, which receives a 198% uplift to 120k per annum. Portsmouth New Theatre Royal also celebrates an increase – it will receive £250k from 2018, up 169% on this year.

The biggest uplift is for Manchester International Festival, which sees its funding rise by over 1000% (up £9m a year), to support it as it becomes the operating body for the new Factory venue in Manchester.

Positive news emerges for two organisations that were removed from ACE’s portfolio during the last funding round and placed under special financial measures: English National Opera (ENO) and Firstsite, which both return to the portfolio on standstill funding of £12.38m and £730k respectively.

Speaking about the award, ENO’s Chief Executive Cressida Pollock, said: “We are delighted to have been readmitted into ACE’s National Portfolio. This follows the huge amount of work that has gone into stabilising ENO and developing a sustainable platform from which we are able to grow.

“Only three years ago we were facing a very real risk of closure and it is hugely significant to see the work of the whole company celebrated through this show of confidence from ACE.”

Another arts organisation that had a high-profile exit from the portfolio last round, Leeds’ Red Ladder theatre company – which turned to crowdfunding in response to the cut – has re-joined the portfolio.

29 current NPOs applied to join the new portfolio but were not successful. These included three organisations based in Bristol: the Arnolfini gallery, Situations and the Poetry Can.

Following the cuts, which will compound £380k cuts from Bristol City Council, ACE announced it would ringfence £3.34m from the NPO budget to support the visual arts in Bristol from 2018-22.

A spokesperson for Arnolfini, which received £750k this year, said the gallery was “disappointed” by the news, which comes as Situations founder Claire Doherty prepares to take over as Director of the Arnolfini.

Situations, which joined the portfolio in 2015 with an annual award of £85k, will be making an announcement “in due course” about the future of the organisation. Chair John Kieffer said: “Our intention is to find a way for what Claire [Doherty] has built here to be continued in some form in the future.”

Claire Doherty said she was “disappointed” Situations would not continue to be part of the national portfolio but welcomed ACE’s “ongoing commitment” to the visual arts in the city.

The organisation receiving the biggest funding cut - though remaining in the portfolio - is London Print Studio, which sees its funding decrease by 42% to just £111k.

Two other organisations also received a cut larger than 10%: Bristol Museums has been cut by 15% but will still receive over £1m annually. Hampstead Theatre will receive a £753k annual grant after receiving a cut of 14%.

For the first time, museums and libraries have entered the portfolio. 72 agreements have been made with museums, representing 66 organisations. Seven library organisations join the portfolio; one in each Arts Council region.

The new additions to the portfolio include SS Great Britain in Bristol, Museum of Rural Life in Reading and Reading Museum, Woodhorn Museum in Northumberland, and the Tank Museum in Dorset.

Luton Cultural Services Trust and Luton Carnival Arts Development Trust join the portfolio, becoming the first NPOs in the town since 2015. They will receive £249k and £150k per annum respectively.

In addition, ACE has designated a new category of NPO called ‘Sector Support Organisations’ (SSOs). There are now 58 SSOs, 24 of which are new to the portfolio.

The Audience Agency is one that joins the portfolio for the first time as an SSO and will receive £750k per annum. CEO Anne Torreggiani said she was “delighted” with the news.

She added: “This new SSO funding means we can continue to innovate and offer free insight to around 1,000 orgs including NPOs. Developments will include a raft of improvements co-designed with users, with an emphasis on using data confidently to inform new directions and new relationships.”

In keeping with a precedent set in 2015, NPOs focused on touring and activity with children and young people will be funded directly through National Lottery funds, rather than Grant in Aid.

The number of NPOs to receive their funding from the National Lottery will increase from around 90 to 150 in 2018, although the available Lottery funds will only increase from £69m to £71m per annum.

Some of the highest-funded NPOs – including Opera North and Birmingham Royal Ballet – which are currently funded via Lottery will be funded via Grant in Aid from 2018, allowing funds to be freed up for the additional Lottery-funded NPOs.

The expansion of organisations relying on Lottery funding is a concern, given the news that National Lottery returns to the arts fell by £55m last year.

When asked by AP whether organisations entirely funded by Lottery had a sustainable source of income, Serota said: “We do know that Lottery funding goes up and down, but we’re confident in our forecasting for this portfolio. We will continue to work with DCMS, and Camelot.

“We should be able to maintain the funding to those organisations in the future”, he added.

The new portfolio includes 351 “diverse-led” organisations, where 51% of the board is either female, disabled, LGBT or from a Black or minority ethnic (BME) background.

This is an increase in the number of diverse-led organisations from 183 in the current portfolio.

Diverse-led organisations that are new to the portfolio include:

There are no disability-led museums in the portfolio and ACE confirmed there has been “limited progress” with BME and disability museums’ leadership. There are also no BME or disability-led organisations receiving funding at the top level (band 3), and there is only one BME-led SSO, MeWeFoundation.

Although the announcements for NPOs were made on the often-criticised funding platform Grantium, it doesn’t appear as if there have been any major issues.

Correction 27/06/17: This article was amended to correct the number of new NPOs in the different ‘bands’.

Tuesday, 11 May 2021
A programme bringing together academics and creative businesses could act as a pilot for a national research and development (R+D) network. UKRI Challenge Director Andrew Chitty floated the idea at a... read more