An insight into our green and pleasant land

Is it possible that our impression of rural touring is outdated and even cynical? Anne Torreggiani and Jonathan Goodacre reveal how wide-ranging it is and who the audiences are. 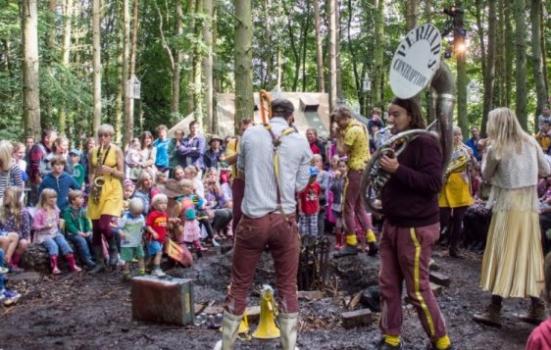 If you haven’t experienced a rural touring event you are probably conjuring up images of a cold village hall with clanking hard chairs, a cup of tea with teacake on the side, and a cosy rendition of an Agatha Christie play.

But you’d be wrong. In reality, rural touring now makes available a rich selection of cultural experiences, such as live literature, dance, circus, music, theatre, exhibitions and children’s events. Increasingly, a wide range of screenings and arthouse film are augmenting the experience. The venues are wide-ranging too – not just village halls but pubs, libraries, outdoor festivals and unusual sites.

In 2004, the Only Connect: Arts Touring in Rural Communities study with the National Rural Touring Forum (NRTF) drew attention to the importance of rural touring to increase access to professional arts, and the importance of cultural opportunities to replace the traditional centres of rural life.

More recently, we have worked with the NRTF and some of its member schemes, using the Audience Finder research framework to augment our understanding of the impact of their work on rural audiences. Because the Audience Finder framework offers a view of audiences comparable with other artforms, areas and venues, it brings it into sharper focus and reveals a more nuanced picture of engagement.

Indeed, audiences for this work have some distinctive characteristics. Our analysis suggests that while some people may be drawn by activities because they are part of local village life, this is only part of the picture.

In fact, audiences are better described as sub-regional rather than purely local. Many urban events draw a higher proportion of hyper local audiences. A comparatively high percentage of rural touring audiences, 36%, travel for a drive-time of more than 45 minutes, and some of these are travelling from semi-suburban areas.

With the cultural offer so relatively sparse in rural areas, this may suggest that demand for rural touring outstrips supply. We could also infer that the rural touring programme has a competitive appeal. Ratings for quality of experience – customer care and of the exhibitions and performances themselves – are uniformly high, while net promoter scores compare favourably with other arts.

Profile-wise, rural audiences are overwhelmingly fairly frequent attenders in the high or middle-engaged Audience Spectrum group rather than low-engagers. Older, and non-urban, most come from the Audience Spectrum groups Commuterland Culturebuffs, Dormitory Dependables and Home and Heritage. They are well-informed, taking in a range of factors in their decision-making. Again, this questions the idea that people are attending in an undiscerning way simply because there is an event in the local hall.

Rural touring attracts some new audiences, but with an overall statistic of 29% first-time attenders, which is close to the average for most arts audiences, there is little evidence that this plays a particular role. If anything, rural touring has a loyal audience of regular attenders who might be more frequent engagers if they lived within easier reach of the cultural offer.

This suggests that rural touring is playing an important role in rebalancing urban and rural inequalities for those with an acknowledged interest in culture. There are significant differences between schemes however, showing that where schemes focus on developing new or inexperienced audiences they are successful.

Audiences are loyal and engaged because they appreciate the special connection between audience, performer and promoter. It is demonstrated in the survey data, with 84% saying they think the quality of the performance, exhibition or film is very good. It is also revealed in the qualitative responses. When asked to describe their experience in the Creative Arts East Strategic Touring project New Places Extraordinary Spaces, a frequent response was: “Thank you.” It reflects both the direct personal connections and a sense of community.

None of this negates the idea that audiences appreciate the value of rural touring work as a force for community building. In his book ‘A Wider Horizon’, Francois Matarasso describes a distinctive experience: “An urban audience mostly don’t know each other and disperse after the show. A rural audience, by contrast, includes people who know each other well, or at least by sight and so there can be an almost palpable sense of community as people greet one another and chat while they are waiting for things to begin.”

This sort of impact can also be seen in the Audience Finder results, which show that a very high 91% agreed strongly or agreed that events enhanced a sense of community in the area, and 92% that they encouraged participation in community life.

Looking at the demand from a population point of view, and in conjunction with drive-times and the high ratings rural touring is given, a very sound case could – and arguably should – be made for an increase in investment and output. Audiences have high expectations of the quality of rural touring, as high as they do of any other cultural offer.

While these expectations are consistently met or even exceeded, audiences are also unanimous in their support of rural touring and its contribution to community life. The point is that rural touring brings intrinsic and instrumental benefits and is appreciated by audiences for doing so. So, you can have your teacake and eat it. We just need more cakes.

Anne Torreggiani is CEO and Jonathan Goodacre is Senior Consultant, International both at The Audience Agency.
www.theaudienceagency.org