Millions of tourists flock to see Shakespeare’s England, but they don’t all have time to catch a play. Geraldine Collinge explains how the RSC has extended its offer beyond theatre. 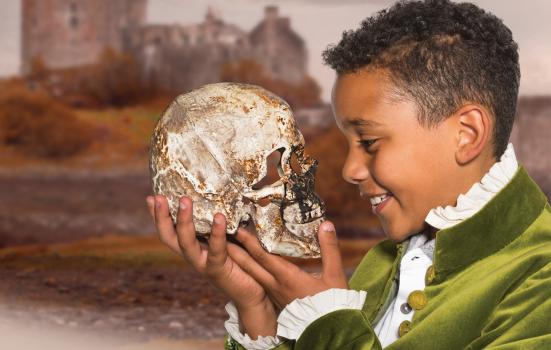 Visitors to the RSC's first permanent exhibition enjoy props and artefacts from the museum collection
Photo:

The summer season in Stratford-upon-Avon certainly starts early, with the town buzzing from early April through to the end of October. Many tourists are here on day trips, Stratford being one of those must-see destinations en route from Stonehenge to Edinburgh, with others looking for a deeper engagement, seeing more than one play and enjoying the context of Stratford’s history.

In 2014 a total of 9.94 million trips were undertaken in Shakespeare’s England, the areas of Stratford-upon-Avon, Warwick, Kenilworth, Royal Leamington Spa and surrounding towns and villages, accounting for a £635m value to local businesses.

With this in mind, we have been growing our offer to engage tourists who may not have time to see a play at the Royal Shakespeare Company (RSC). Since reopening the theatre in 2010, we have been creating a new daytime offer in our buildings and surrounding gardens, and developing a new audience for the company’s work.

This includes an ongoing programme of free drop-in activity for families, encouraging people to explore our buildings and their stories, go on backstage tours, try on costumes and begin to explore Shakespeare, with a more extensive programme of activities in the holidays.

In 2016 we reopened the theatre’s Victorian Swan Wing. The oldest part of the building, it dates from 1879 and was built for the first permanent theatre company. As part of this, we developed a new exhibition that would run throughout the building, highlighting Shakespeare-themed stories that the Victorians had used to decorate the building, while adding new artistic commissions responding to Shakespeare today.

We also opened The Play’s the Thing, our first new permanent exhibition. It reveals the secrets and stories of Stratford’s theatre-making, transforming a cold, dark and underused area of the building into a treasure-trove of previously unseen costumes, props and artefacts from our huge museum collection.

Alongside these, we developed new interactive technology to enable audiences to get hands-on with the work of the RSC and its history. These include an interactive mirror where people can try on some of our most iconic costumes and the chance to ‘play’ Hamlet opposite the ghost of Old Hamlet from our recent stage production.

The exhibition is aimed at a family audience, which meant thinking carefully about the significant barriers to attending a new exhibition in the theatre. Consulting non-attenders through the development of the exhibition has been crucial and has helped us to keep seeing it from a different perspective.

We worked closely with colleagues across Stratford while creating the exhibition. There were two other Heritage Lottery Fund-supported projects in development for 2016, and collaboration around these was essential to enable us to support each other and learn together to ensure that we created a joined-up offer.

In that same year the already rich Stratford experience was enhanced with the redevelopment of New Place, the site of Shakespeare’s last home in Stratford, and the Schoolroom where Shakespeare attended school.

Hearteningly, day visitors to the Royal Shakespeare Theatre and Swan were up 12% to approximately 640,000 last year, the highest since reopening the building in 2010. Over 832,000 visitors toured the five historic Shakespeare family homes and gardens (8% more than in 2015.) We are now focusing on how we continue to grow audiences in Stratford, encouraging those that visit to do more while they are here.

We continue to work with the Shakespeare Birthplace Trust to develop a strategy for closer collaboration, particularly looking at our activities to celebrate the upcoming 250th anniversary of the first-ever Shakespeare celebrations in 2019. In 1769, David Garrick conceived a major celebration of Shakespeare to put Stratford on the map, and began the Shakespeare industry that we know today. His Jubilee didn’t quite go to plan – he missed the anniversary of Shakespeare’s birth by five years, and torrential rain marred proceedings with the planned pageant being called off. But its subsequent run at Drury Lane Theatre was an enormous success, and the endeavour itself was enough to change Stratford forever.

We are working with the Shakespeare Birthplace Trust to plan a celebration of this extraordinary legacy. Already the shift in perspective of me working there one day a week is having an impact on how we think about the RSC in terms of the town, and how we can collaborate to develop an even better offer for its visitors.

Although it sounds simple for two companies to work together more closely, the trust that needs to be established and the leap of faith to be made to make this work is enormous. What would happen if we all opened ourselves up in this way? By working together creatively we can challenge each other, have great ideas and produce our best work.

Geraldine Collinge is Director of Events and Exhibitions for the Royal Shakespeare Company.
www.rsc.org.uk
Tw @geraldinecoll